It’s time grab the handlebars and race to the finish line, as Mario Kart 8 Deluxe now works with Nintendo Labo.

Using the Nintendo Labo’s Toy-Con Motorbike, players are able to play Mario Kart 8 Deluxe in TV mode, as well as on-the-go by inserting the Nintendo Switch system into the vehicle’s dashboard. Other driving options that come with the Motorbike include auto-accelerate and Smart Steering.

The Nintendo Labo is a simple piece of cardboard that can be turned into almost anything. In Mario Kart 8 Deluxe’s case, it’s a motorbike, but other gear can include a piano or even a fishing rod. After players add their Nintendo Switch system to it, these items would be brought to life, allowing players to win a race, catch some fish, or play a song.

The idea for the Nintendo Labo first came about when Tsubasa Sakaguchi, the Nintendo Labo Director, saw that a lot of video games already exists and wanted to create something outside of the box. He thought about making something easy to grasp and can only be done with the Nintendo Switch and its controllers.

What he realized was Joy-Con controllers are unique in the way they had sensors in them. If he and his team made something with both controllers attached to it, then they could use the “differential” between them to do new things.

Think of “differential” as how players can have one control act as a word, and have the other act as a shield. Alone, they perform different actions. However, by using both controllers for a new action, players control an action that comes from the relationship “between” the controllers. For example, a fishing game that uses the “differential” control scheme lets players measure the rotation of the reel using the position of the handle. In this case, the right Joy-Con acts as the fishing rod handle, while the left Joy-Con is attached to the real. As the first game to get Toy-Con support outside of Nintendo Labo software, Mario Kart 8 Deluxe paves the way for more compatible Nintendo Labo titles. 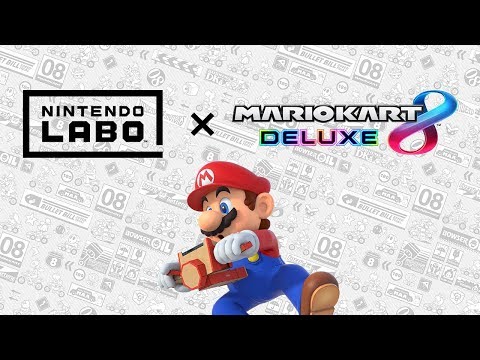 Liked this article and want to read more like it? Check out Phil Brown’s Mario Kart 8 Deluxe review.