Get ready to join the pawsome world of cats in Cat Quest.

PQcube announced today that Cat Quest will be launch August 8 on PC via Steam. Cat Quest is an open world RPG where players take on the role of a young cat trying to save their catnapped sister from the evil Drakoth. Featuring real-time combat, Cat Quest allows players to use dodge roll and powerful magic such as Lightnyan, Flampurr and Healpaw. Cat Quest also allows players to customise their equipment, providing extra stat boosts to fit player’s play styles. Cat Quest also allows for free world exploration, filled with side quests and treasure. The game also features a fully orchestrated score inspired by classic RPGs. 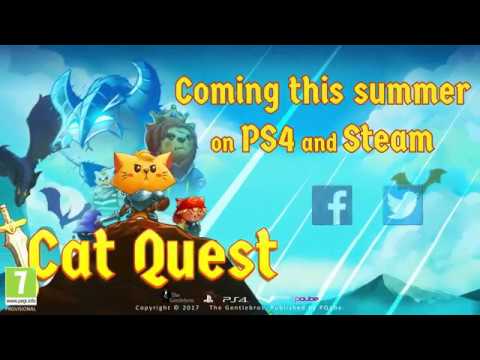 Cat Quest is being developed by The Gentlebros. The game uses a similar art style as the studio’s previous project, Slashy Hero. As the name suggests, Slashy Hero is a hack and slash game where players move through 95 monster-filled dungeons with unique enemy types and difficult bosses. Slashy Hero features a movement system where players draw in the direction they’d like to go in, attacking as they go. Players can loot treasure chests found throughout the dungeon, allowing them to use new costumes that boost character stats. Slash Hero won multiple awards when it released last year.

Cat Quest originally began development as a dancing game called Copycat. Players would have to dance a certain set of moves which would then be copied by the other player. Unlike Cat Quest, Copycat used 3D models. After a case of development issues, Copycat evolved into an adventure game called Cat Travels. Players moved from point A to point B as they battled monsters and collected treasures. With a desire to include exploration, Cat Travels became Cat Quest.

Cat Quest will be available on PC, PlayStation 4, Nintendo Switch and mobile devices later this year.