Square Enix and Electronic Arts are partnering to bring the worlds of the Sims 4 and Final Fantasy XV together.

Players who purchase Final Fantasy XV Windows Edition via EA’s origin service will unlock unique the Sims-themed Llama Suit and Plumbob outfits that can be used by Noctis in the game’s single-player campaign and for player’s avatars in the game’s multiplayer mode.

Also, starting on March 8th, those who own the Sims 4 will also be able to download a special Final Fantasy XV prince Noctis Lucis Caelum outfit for their avatars. The Final Fantasy promotion will run from the game’s launch day on March 6, 2018, until May 1, 2018 and the Sims 4 content will become available to download on March 8th. A trailer for the Llama Suit and Plumbob outfits is featured below. 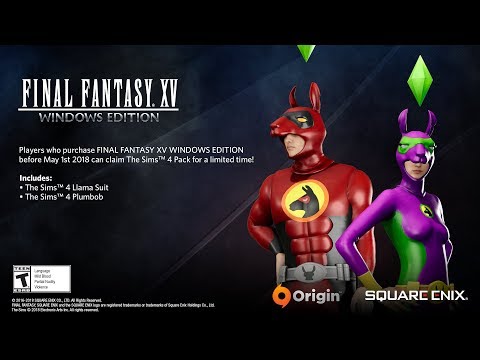 As for the actual game, the PC version is launching with a number of new features. There will be an Expanded Map with new side quests and a fully controllable Royal Vessel boat that players can use to explore further. Also, the game will launch with a new First Person Camera Mode that allows users to experience Final Fantasy XV Windows Edition from Noctis’ perspective.

The game supports Native 4K and 8K resolutions with HDR10™ and DOLBY ATMOS® along with ongoing mod support. Final Fantasy XV originally came out on PlayStation 4 and Xbox One on November 29, 2016 and a mobile version of the game launched back in September of 2017. The PS4 version currently has a score of 81 on review aggregate site Metacritic.