Days After Podrick’s Song Premiered on Game of Thrones, Music Covers and Theories Are Abound

While last week’s episode of Game of Thrones primarily served as another setup for the imminent battle at Winterfell, it also featured an excellent a cappella performance by Podrick Payne actor Daniel Portman, singing a song called Jenny of Oldstones. The song has since set the internet on fire; the studio version by Florence and the Machine is currently topping charts on streaming services and Shazam, theories behind its hidden meaning are spreading like wildfire, and hundreds of cover versions have already gone up on YouTube.

What’s fascinating is the nature of the song’s dissemination in the course of just a few days. It’s normal for story bits in popular shows to be broken down, analyzed, and memed to infinity mere hours after they air. But since Jenny of Oldstones is a song—a folk song with multiple premiere versions—it has taken a life of its own, much like how folk songs did back when minstrels travelled from city to city, kings ruled the lands, and everyone smelt like fresh manure.

First, some historical context: the song first appeared in the book series’ third installment, A Storm of Swords, though only the first line is sung.

High in the halls of the kings who are gone, Jenny would dance with her ghosts…

A Storm of Swords, Chapter 43

In the book, a member of the Brotherhood Without Banners sings the song as payment to an old dwarf woman, called the Ghost of High Heart, for her prophecy. In last week’s episode, however, the song is sung in its entirety, and the lyrical content has enough going on to get fans of the show and the books alike to drum up some more theories on the song’s origins and what it might be alluding to for the rest of the season.

Since the song’s appearance in the books, it’s become common knowledge amongst readers that the “Jenny” in the song is Duncan Targaryen’s wife. Duncan was originally meant to marry a daughter of Lyonel Baratheon and rule the seven kingdoms, but when he married Jenny of Oldstones and spurned the Baratheon lady, he left his brother Aegon V to be crowned instead. As everyone reading the books or watching the show knows, King Aegon—later known as “the Mad King”—would later be overthrown by the armies of Robert Baratheon and Eddard Stark, then murdered by a member of his own Kingsguard, Jaimie Lannister. 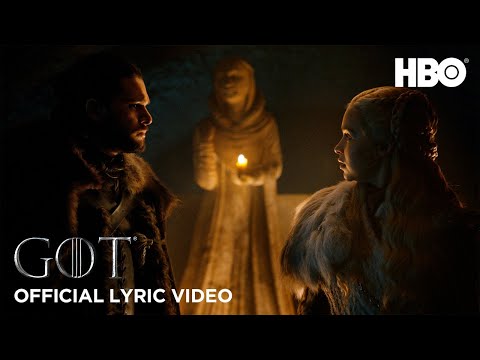 The song itself is a beautiful dirgelike melody composed by David Benioff, Dan Weiss, and series composer Ramin Djawadi. Though it’s common for film songs to premiere with two versions, the two featured in A Knight of the Seven Kingdoms are uniquely very different from each other. Podrick’s version has a very olden-times vibe, switching between minor (sad) and major (optimistic) in a style heard often in 17th-century music and older. The studio version by Florence and the Machine, however, maintains a dark, more modern tone throughout, and has a few distinct melodic variations.

It’s thematically fitting to have multiple versions of a medieval fantasy folk tune, as that’s what folk tunes are like. Usually, folk tunes undergo changes in melody and lyrical content as they pass from performer to performer. And that’s exactly what’s happening with Jenny of Oldstones through the hundreds of musical covers already on YouTube!

The video covers more closely relating to the Florence and the Machine recording are generally well produced and very professional sounding.

Podrick’s rendition, meanwhile, seems to have inspired more impromptu performances; much like the original performance itself.

There are even a couple of artists that seem to be venturing away from both premiere versions, creating their own versions of the song!

The way this song has spread and reformed itself through theory forums, cover songs, and wiki articles speaks to both Game of Thrones’ cultural impact and the ability of its writers to create a such a believable and rich fantasy world. While I look forward to spectacles like the largest battle sequence in cinematic history and the conclusion of the most watched show ever aired on television, it’s the small moments like Podrick singing Jenny of Oldstones in the cold halls of Winterfell that I’ll miss the most.