US Version of Nintendo 64DD Surfaces

Once thought to be a Japanese exclusive, a North American prototype of the Nintendo 64DD has been found.

But first, a little bit of background. Put into production in 1999, the 64DD was an ill-fated accessory for Nintendo’s popular console. The add-on gave players access to exclusive games and online functionality via RandNet, among other things. Some exclusives included the Doshin the Giant games, the Mario Artist series, and an expansion pack for F-Zero X. It was discontinued in 2001, thanks to middling sales, software delays, and a general lack of interest.

This cancellation also halted development on several games, including a Nintendo-developed Harry Potter game and a Doom sequel.

Because of this lukewarm response, Nintendo never had any intent to bring the 64DD westward. At least, that was the narrative until this week, but a forum post on Assembler Games brings that into question.

I acquired what might be a rather unusual N64 64DD drive … the picture with English text (instead of Japanese) is legit. This is the prototype for the US version of the 64DD … This unit also had a N64 blue disc inside, but I don’t know what is on it as the drive just clicks and displays an error message. However, I KNOW that Nintendo of America used this unit and the contents could be anything.

There are three attached photos in the post. Considering the original poster lives twenty minutes away from Nintendo of America headquarters, this is likely legitimate. And according to site moderator ASSEMbler, he has actually stumbled across these US dev units in the past.

Regardless, this still leaves the question of the disc. Could this be a prototype of an unreleased game? An early version of a later Gamecube title? Hopefully, we’ll see in the coming weeks.

We will keep you updated with any news that may come out of this incredible find.

UPDATE – There is now a video showcasing the unusual 64DD, and its oddities, in action: 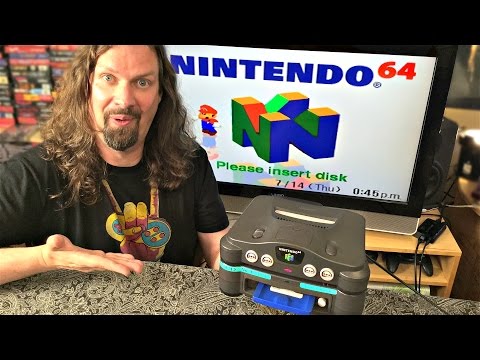