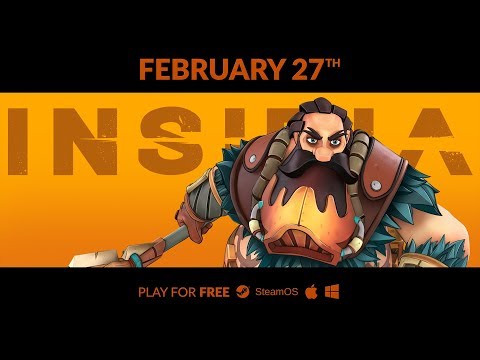 Will this event be about love? Nope! In the world of INSIDIA, the degenerates of the wasteland celebrate war on this day instead. Survive Valentine’s Day and unlock the exclusive Heartbreaker skin for Coma in a special week-long pre-launch event! INSIDIA is currently available on Steam Early Access and officially launches on February 27, 2018.

Quick and deadly, new Champion Coma can dish out powerful chained attacks at medium range. However, to sustain her damage output, the Shadeslinger must carefully choose when to reload her gun, to avoid being caught with an empty barrel.

Trigger Happy (Passive) – Every time an enemy Champion moves to a tile near Coma, she quickly pops a shot his way! This passive can trigger multiple times during each turn as long as Coma has enough bullets.

Reload – Coma reloads her trusty weapon and heals herself in the process. Guns are a gal’s best friend, after all.

Barrage – Coma unloads her gun on a single target, dealing damage for each fired bullet.

INSIDIA — which has enjoyed fan acclaim since September 2017 while in open beta — features familiar mechanics that online strategy game fans love, mixed with a heavy dose of rapid-fire mayhem. Players must assemble their teams of four from a roster of steam knights, fierce punks, odd mutants and other survivors of a post-apocalyptic fantasy world, then take part in quick matches that demand on-the-fly decision making for perfectly coordinated chaos. The game’s unique combo system features simultaneous turns where both players never give up control of the action, introducing them to a new league of tactical depth. Enter the colorful yet brutal world of INSIDIA!

Thanks to its competitive nature and incredibly fun to watch gameplay, INSIDIA aspires to become a competitive esport game. It has been selected to be the first indie game of its kind featured on FACEIT, the leading platform for online competitions, with nearly 10 million members, joining such titles as Counter-Strike: Global Offensive, DOTA 2, Overwatch and more on the platform. INSIDIA‘s integration with FACEIT from launch allows players to easily take part in tournaments, leagues, ladders, hubs and more.