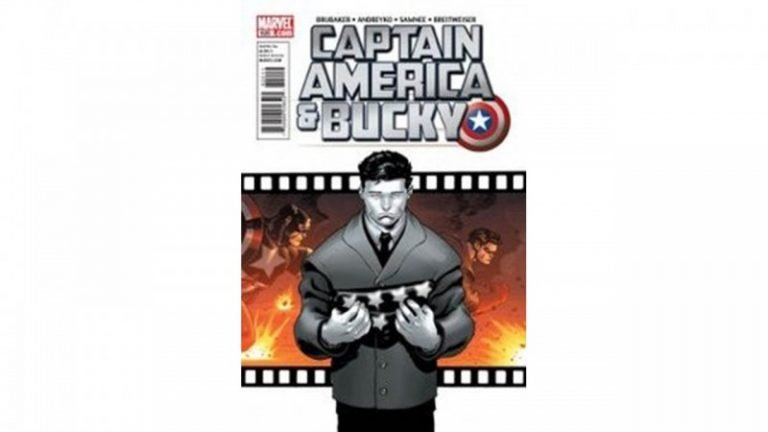 With Brubaker launching a new Captain America ongoing, this title has become Captain America and Bucky, a choice which still seems odd, now that Bucky Barnes has died in the pages of Fear Itself.That being said, this is an origin story, pure and simple, and although the origin of Bucky is fairly well known, it’s interesting to note that the origin story is only well known from one particular perspective, or rather isn’t known from the perspective of the protagonist in that origin story, Bucky himself.This issue is a nice glimpse at his past, how he grew up, and how he would eventually become the partner to Captain America.The closing of the issue dovetails quite nicely into aspects of Captain America/Bucky’s origin that was touched on earlier in Brubaker’s run on Captain America, just told from a different vantage point.

When it comes to writing Bucky Barnes, there really is no other writer that can compare to Brubaker, who is really, for all intents and purposes, the main architect of the modern incarnation of the character.Before Brubaker came along, Bucky was dead, one of the few comic book deaths thought to be permanent, on a very short list.And yet now he’s become a viable leading man, he headlined Captain America for a couple years, and even took on the identity of Cap himself, all thanks to Brubaker’s brilliant writing and characterization.Along with Andreyko, they weave a great yarn, showing more of Bucky’s upbringing than ever before, so that we know more about the man who became Captain America’s sidekick, bringing the reader up to the point where the two men first are introduced to each other (in the modern-day retelling of their origin, which eschews the classic “Bucky caught Steve Rogers changing into Captain America” origin).

Samnee does a fantastic job on bringing this script to life, as his artwork seems perfectly suited to the subject matter, not to mention the timeframe.The artwork has a gritty feel, which fits the script beautifully.If this story were set in the modern day, the artwork would feel out of place, but as the story is set in the late 1930s and early 1940s, it’s a perfect fit.

For fans who were considering dropping this book and just heading over to the newly launched Captain America ongoing, I can’t stress enough how much of a mistake that would be. You’d be missing out on a fantastic story with great artwork, which makes up an engaging and enjoyable read. Recommended!

You’d be missing out on a fantastic story with great artwork, which makes up an engaging and enjoyable read.
REVIEW SCORE
8
File Under: