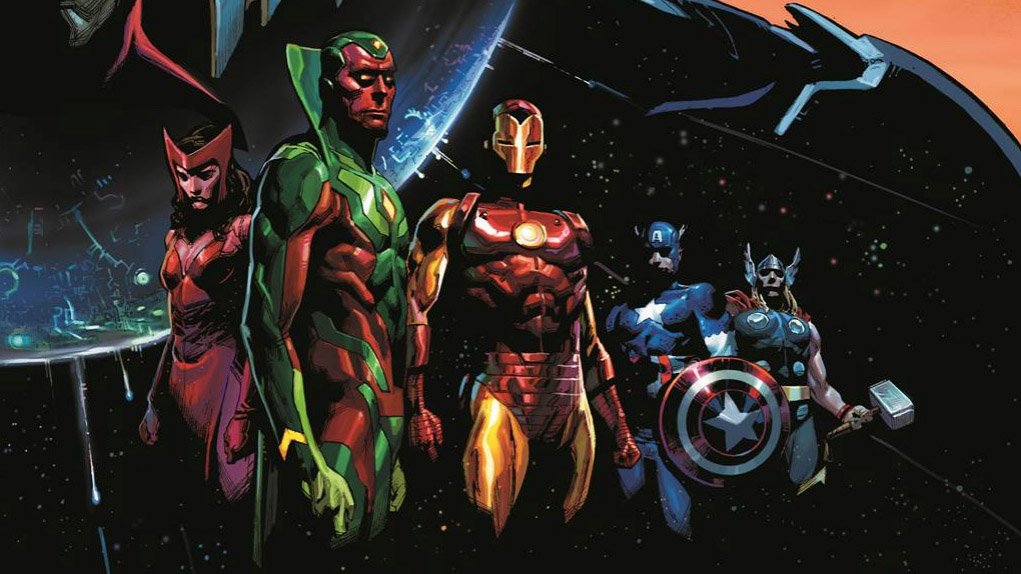 With Avengers Age of Ultron mere weeks away from release in North America, it’s no surprise that Marvel Comics is ensuring that there’s plenty of Ultron-related hitting comic book stores. This has run the gamut from one-shot specials focusing on alternate reality versions of the Avengers taking on Ultron, a trade paperback collecting never-before-collected issues of West Coast Avengers against Ultron, to this OGN by Rick Remender and Jerome Opena. Marvel has been getting back into the OGN market of late, with Avengers Rage of Ultron being the fifth such title set in the Marvel Universe. With the first two releases, featuring the Avengers and Spider-Man, they felt a bit more timeless in their nature, as they weren’t necessarily set in a specific time in the Marvel Universe, and as such felt more accessible to new readers, existing readers, lapsed readers, etc. The third and fourth were focused on the X-Men and Thanos respectively, with the former very much tenured to current X-continuity, and the latter a little sparser in terms of its roots with current continuity.

This fifth volume featuring the Avengers feels like the oddest release in terms of just how rooted in current continuity it is, while at the same time trying to get a new Ultron story told in time to be on the shelves just as the movie-watching public is preparing for the new Avengers movie, and meeting Ultron for the first time. Considering the release and the use of Ultron, it’s clear that there’s a marketing plan in place for this book, and yet the cast of the book features the ragtag group of heroes known as the Uncanny Avengers, who have barely formed a team yet in the ongoing Uncanny Avengers ongoing series by Rick Remender and Daniel Acuna.

Over twenty-five percent of this comic focuses on a flashback sequence, which although entertaining (and feeling much more classic, as it has an Avengers squad with classic renditions of Captain America, Thor, Iron Man, Beast and more) ultimately is too long and means that there’s far less time spent on the present day action of the rest of the story. Whereas prior OGNs felt like they were telling a big story that worked better in this format, instead we’re treated to an OGN which felt like a few different issues strung together, which don’t work well when read all at once. If you were to parse this volume out into a few different issues, I think the flow and development of the story would have been more effective, but in one sitting, the book shows its flaws, as the story isn’t all that well constructed or even thrilling. The odd sense of pacing in the book is a primary culprit for this, as the extended flashback sequence could have been cut significantly, to allow the present-day sequences more room to breathe, and be elaborated on.

There are characters used in this volume aren’t well introduced for the reader, particularly the Descendants, as well as the Stark Sentinels. For fans of the current Avengers books by Remender, these characters are better known, and known quantities. But again, typically the audience for these OGNs is larger, and yet the characters used feel much more specialized and new reader unfriendly. This entire storyline, the way it’s written, the characters utilized, the motivations, it’s all very underdeveloped, not to mention disappointing. Rick Remender has written a lot of fantastic comics in the past few years with Marvel, and yet it would be hard to convince me of that fact based solely upon this work.

The threat of Ultron doesn’t feel as real, or as intimidating as it often does, and even the way in which Ultron is eventually confronted and taken off the board feels disingenuous, not to mention doesn’t seem to make much sense. Hank Pym feels completely mishandled here, but the way that his fellow Avengers treat him somehow feels even MORE off base. Hank Pym is a founding Avenger, and yet is often mistreated by writers and by extension the Avengers themselves in-story. A few years ago Dan Slott wrote a great rendition of Hank Pym as part of his run on Mighty Avengers, and afterwards Christos Gage delivered a very mature take on Hank Pym in Avengers Academy, showing how Hank had grown into a confident teacher of the next generation of heroes. That Hank Pym isn’t to be found anywhere in this OGN, as instead Rick Remender portrays Hank Pym in a fashion that is easiest to manipulate him into the situation he needs him in for this story to work. The problem with that is that it still fails to work, the characterization is sloppy, and the Macguffin on what ultimately happens to Hank and Ultron feels ridiculous and makes no sense whatsoever. In some ways, I think that if it had happened in the first act of the story, and then the rest of the story was finding a way out of it, I think it would have been a more interesting and enthralling concept. Instead the story just kind of ends on a weird down note, which doesn’t feel like the kind of ending you would hope for and expect from an OGN, which is meant to be a done-in-one complete story.

The saving grace for this book is the absolutely fantastic artwork by Jerome Opena. He’s a fantastic collaborator for Rick Remender, his design work is superb, his action thrilling, and his take no the classic Avengers team seen in the flashback segment justifies some of the extra pages devoted to the flashback yarn, just to see his take on this very classic-looking Avengers roster. The artwork has a cinematic flair to it, which is appropriate given the upcoming release of Avengers Age of Ultron.  The colours by Dean White, Rachelle Rosenberg and Dono Sanchez Almara are moody and atmospheric when they need be, in a way that evokes memories of when Frank D’Armata’s style of colours was prevalent in Marvel books from a decade ago. There’s also a bright palette used in the flashbacks, to highlight the colourful Avengers and their battle of evil, personified by Ultron. The present-day colours aren’t quite as bright, which (likely unintentionally) underscores the nature of the Avengers’ roster in the present. Even Starfox manages to look fantastic in these pages (and no, I’m not talking the Nintendo character).

Overall, Avengers Rage of Ultron feels like a missed opportunity to do something truly new and exciting with Ultron. The ending is clearly meant to be the big hook for the story, but by ending on it instead of having it happen earlier in the narrative, it feels like it defeats the purpose of a done-in-one OGN telling a complete story. It definitely asks a big question about what will happen next, but that’s a job for an ongoing comic, not an OGN. The decision to spotlight the current Uncanny Avengers roster, with some characters who have never before worked with them, such as the new female Thor, made the series feel a bit more tone deaf and rushed.

Marvel has been getting back into the OGN market of late, with Avengers Rage of Ultron being the fifth such title set in the Marvel Universe.