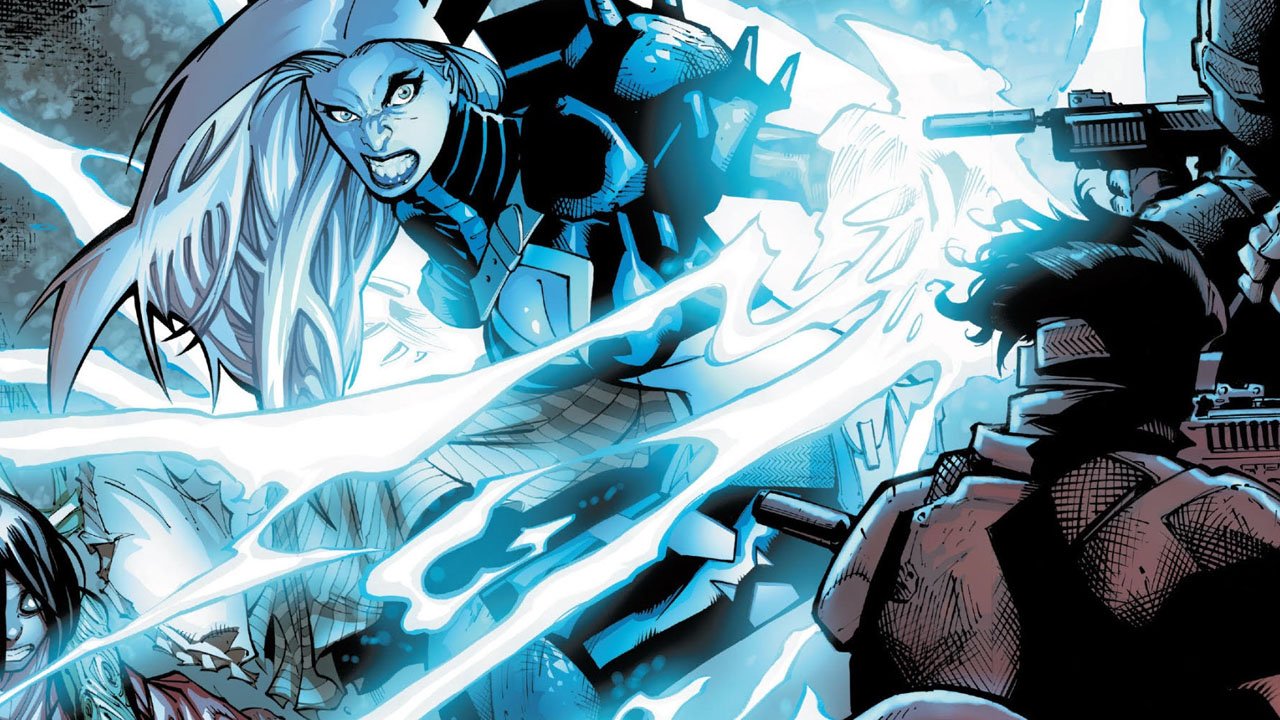 Spinning out of the events of Secret Wars, Extraordinary X-Men #1 is the new flagship X-title for the All-New, All-Different Marvel line. Written by Jeff Lemire (Hawkeye) with art by Spider-Man veteran Humberto Ramos, this book had every right to be amongst the best books of Marvel’s relaunch. Unfortunately, the book struggles to find its footing in this newest iteration of the Marvel universe.

In many ways, this first issue follows the classic setup for new X-titles. The book moves between each of the new members of the team, showcasing their own current troubles and presenting an important reason to bring the team together. This title’s team consists of Storm, Iceman, Magik, Colossus, Nightcrawler, the time-displaced young Jean Grey and the alternate universe Old Man Logan. The reason to bring the team together? The threat of mutant extinction (again).

The Terrigen Mist, the substance that imbues the Inhumans with their powers, is poisonous to mutants and exposure to the mists will sterilize them. As Storm tries to rally the remaining mutants on Earth, the world’s humans have fully turned against them. Mutants and their families are being targeted by mobs and soldiers alike, and the few remaining X-Men are stretched thin trying to rescue them. Things look grim for all of mutantkind, with the mysterious sanctuary known as X-Haven their only hope for survival.

Unfortunately, despite the massive stakes in the story, the issue falls flat. The mutants have consistently faced extinction for the last several years, granted only a brief reprieve in 2012. To return to that storyline feels like a return to the status quo, wasting the opportunity to take the line in a different direction. There’s nothing inherently wrong with this story, but it’s disappointing to see it again so soon.

Lemire does a fine job of introducing his team and laying out some interesting plot points for the first story arc, but the work isn’t up to the writer’s usual calibre. The plot is functional, but lacks the emotional charge that should accompany such a dark storyline. Even the dialogue comes across as stilted, with characters awkwardly delivering exposition throughout the issue. The big exception to this is Nightcrawler. Lemire handles the character flawlessly both in terms of dialogue and story, instantly making his subplot the most interesting portion of the book.

Extraordinary X-Men #1 is hindered by some continuity problems, though that was likely unavoidable at this point. Due to a number of delays, the events of Secret Wars have yet to conclude and it’s unclear how the new Marvel universe is put together. Coupled with an eight-month time jump, the book can only offer vague hints about the events that led to X-Haven and renewed mutant persecution. It works to build mystery, but at the expense of frustrating the reader.

Though the writing in the book was a bit disappointing, the opposite must be said for Ramos’ artwork. There’s an energy that’s immediately apparent in his linework, drawing the readers easily through the muddied exposition. Ramos also makes smart use of his layouts to keep the narrative flowing, specifically when dealing with Colossus and his past. The character designs may have initially drawn some ire, but they work well to give the book a distinct feel. The artist is known for an exaggerated style and while that’s present here, there’s also a degree of subtlety to his characters that help them fit into this serious narrative.

As great as the pencils are in the book, special mention must be made of Victor Olazaba’s inking and Edgar Delgado’s colours. The book looks great, with panels ranging from dark and moody to brilliant flashes of light that pop on the page. As captivating as Nightcrawler’s teleportation and Magik’s swordplay look, the most impressive colouring for me is the Russian landscape. It’s a simple background, but it’s beautifully coloured and stands out from the rest of the book.

Extraordinary X-Men is a disappointingly ordinary X-Men story brought to life by an extraordinary art team. Lemire’s story has plenty of interesting plot points to build off of, so hopefully future issues will feature a more compelling story. Even if the writer never finds his footing, Ramos’ art will be more than enough of a draw to get readers through the first story arc.

Extraordinary X-Men #1 is hindered by some continuity problems, though that was likely unavoidable at this point.