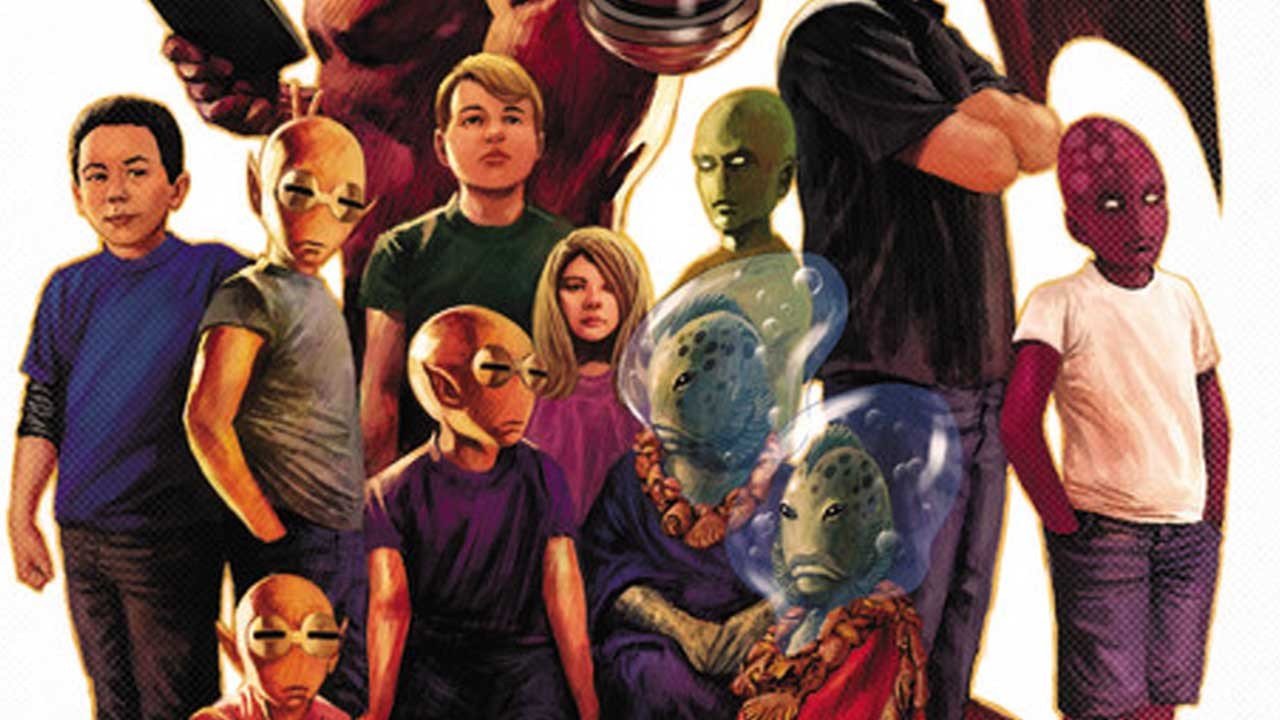 This volume is the newest collection of Jonathan Hickman’s brilliant FF series, collecting issues #12-16. This is not the most accessible of stories, however, as it’s steeped in continuity, as it reaches the conclusion to the mega story that Hickman started writing and putting together when he wrote the Dark Reign: Fantastic Four mini-series, just prior to taking on writing chores for the Fantastic Four. Unlike the first two trades of this title, this is a much more difficult read in some ways, because when these issues were being published, they were coming out the same time, roughly, as the corresponding issues of Fantastic Four, which had returned to the stands with issue #600. As such, you’re not getting the full story, in terms of the entire epic, but you are getting the majority of the story which actually pertains to the children of the Future Foundation. The first issue of this collection makes little sense, however, if you haven’t read issue #600 of Fantastic Four, as the events of that issue launch the story that is contained within these pages into action. Hickman’s plotting is fantastic, as the threads that comprised his entire run on FF/Fantastic Four came together in a flurry of larger than life ideas. When I recommend this trade paperback, I can’t stress enough how important it is to read Fantastic Four #600 first, and to also stop reading after issue #15, and read the rest of the Fantastic Four by Jonathan Hickman Volume 5 collection before finishing out this volume. The story will make much more sense that way. To be honest, I’m surprised that both titles weren’t collected concurrently in one big trade paperback. Yes, it would have broken up the narrative a bit in each story, but there were also benefits to reading the two series side by side, to see how they complemented each other, even as they told different parts of the mega story.

Hickman’s scripting is masterful, and in my opinion, I think the writing on FF was superior than his writing on Fantastic Four at the same exact time. As much as I loved all the disparate elements of his run coming together, it was the storylines that culminated in this title that I enjoyed the most, as the storyline of the Bridge and the Council of Reeds reaches a conclusion, bringing evil Celestials into the regular universe. The story of Franklin and Valeria is enthralling, as Valeria works to prolong events that are going to happen by a matter of minutes, to help save the world. Franklin prepares for the part he is to play in the drama, Nathaniel Richards helps move pieces into place, and Doctor Doom plays his part willingly, and embraces his own destiny, and the gift at the end of the road.

The artwork by Bobillo and Dragotta is extremely expressive, but it will come as quite the stylistic shock to those who’ve read the first two FF collections. With the return of Fantastic Four, it took the premiere artists who had been illustrating FF, and left behind artists who have a very different style of artwork. Although it originally threw me off, with time I came to really enjoy the detail in the artwork, how it DID possess a different sensibility, and absolutely nailed the high drama and excitement of the showdown on The Bridge. Both artists bring different qualities to the book, along with different highs and lows, but overall present a great illustrated take on the script that Hickman put together.

This is a great read, and for fans of Jonathan Hickman it should not be missed. This is a tremendous read, and this is where Hickman’s mega story reaches part of its conclusion (with the other half being in the recently released Fantastic Four by Jonathan Hickman Volume 5 collection). Highly Recommended!

I can’t stress enough how important it is to read Fantastic Four #600 first, and to also stop reading after issue #15, and read the rest of the Fantastic Four by Jonathan Hickman Volume 5 collection before finishing out this volume.