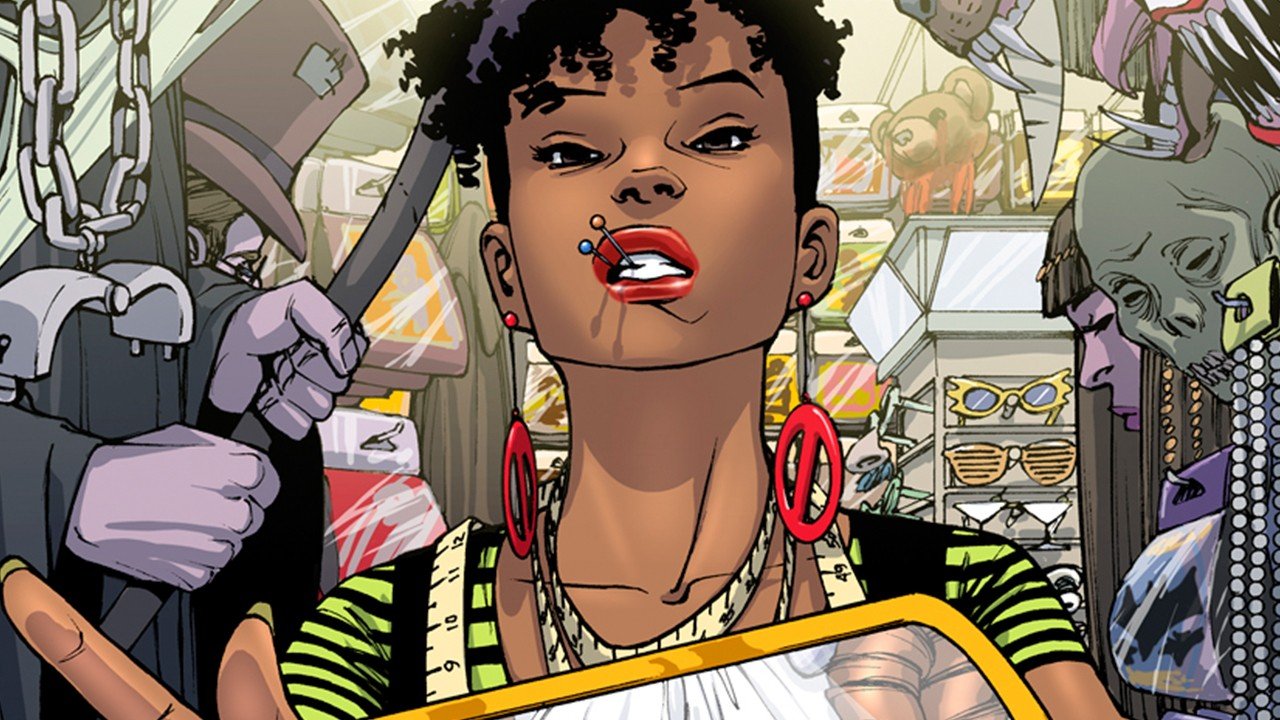 When asked why it is I’m so enamored with Halloween as a holiday, I’m never quite sure how to answer. Is it the chance to dress however you please without being forced to adapt to social norms? Is it the surge in popularity for some of my favorite horror films so that they receive additional plays on TV? I can’t say for sure, but for an amalgam of reasons Halloween remains my absolute favorite holiday. Halloween Eve #1 features a protagonist (Eve, of course) who actually detests the wonderfully gory and garish holiday — crazy, right? But she’s not horsing around. It’s just not her cup of tea. Despite the fact that she’s employed at a costuming store and faces customers each day looking for a great costume to suit them. She feels the whole Halloween thing is an enormous waste of time, and isn’t afraid to show it. Bah, humbug, right? 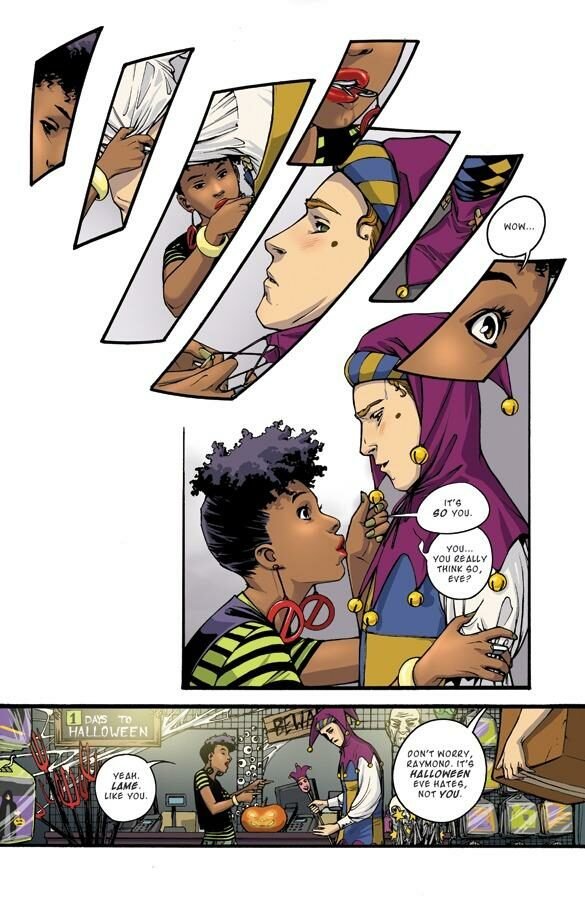 Eve continues to balk at the Halloween spirit every year, and refuses to partake in the costuming her boss and coworkers have devised as publicity for Halloween Land. It becomes apparent rather quickly Eve might just as sooner eat a spoonful of nails rather than slip into the stylized Dorothy costume to a accompany her peers to the Halloween festivities. But as the story progresses we can clearly discern that Eve is fighting off a conflict between her inner persona and her outward appearance. Perhaps that’s why she struggles so much with Halloween and all the things it stands for in our society — accepting and not hiding the inner you; proudly displaying it, via costume or otherwise.

In typical holiday tale fashion, Eve is in for a lesson to be learned about Halloween, herself, and interacting with others. While working late one night at Halloween Land, she’s whisked way to a Wizard of Oz-like world in which truths about herself (and a very special coworker) are revealed. It’s a whimsical whirlwind adventure that we won’t spoil here, but the end result is Eve having openly embraced the real her and the Halloween spirit, as well as the love that’s been blossoming across this one-shot. The tale comes to a beautifully-wrapped, clean ending that manages to tell an entertaining story without reaching for tired clichés or two-dimensional characters. Each player, even those acting as supporting cast, display traits that make them even more endearing.

Unfortunately, the nature of the one-shot does not allow for as much multifaceted characterization as it’s evident writer Brandon Montclare envisioned. I would have loved to see more of Eve as a Halloween curmudgeon and her interactions with customers and the crew, but with such a short story you’re forced to expedite the intricate process of character introductions, growth, and the payoff. But that’s less the fault of the creator than the format itself.

Amy Reeder’s art is colorful and frenetic, and acts as the perfect complement to Montclare’s setup. Eve and her Halloween Land cohorts are drawn to perfection. The cast is a sticky sweet concoction of vivid color palettes, tasty Halloween concoctions, and imaginative costume designs. It’s like a delicious bag of October 31st treats completely animated and given new life. We’d expect nothing less from the fabulous Amy Reeder, and her work here truly shines, especially when it comes to the climax of the issue and unveiling Eve’s gorgeous costume.

Halloween Eve is dark and decadent but still equal parts silly and heartwarming. I wanted to spend more time with these characters. It felt genuine and real, much like true Halloween believers. And now that I’ve found a writer who gets it, I want more. Perhaps we’ll see another glimpse into Eve’s world next year.