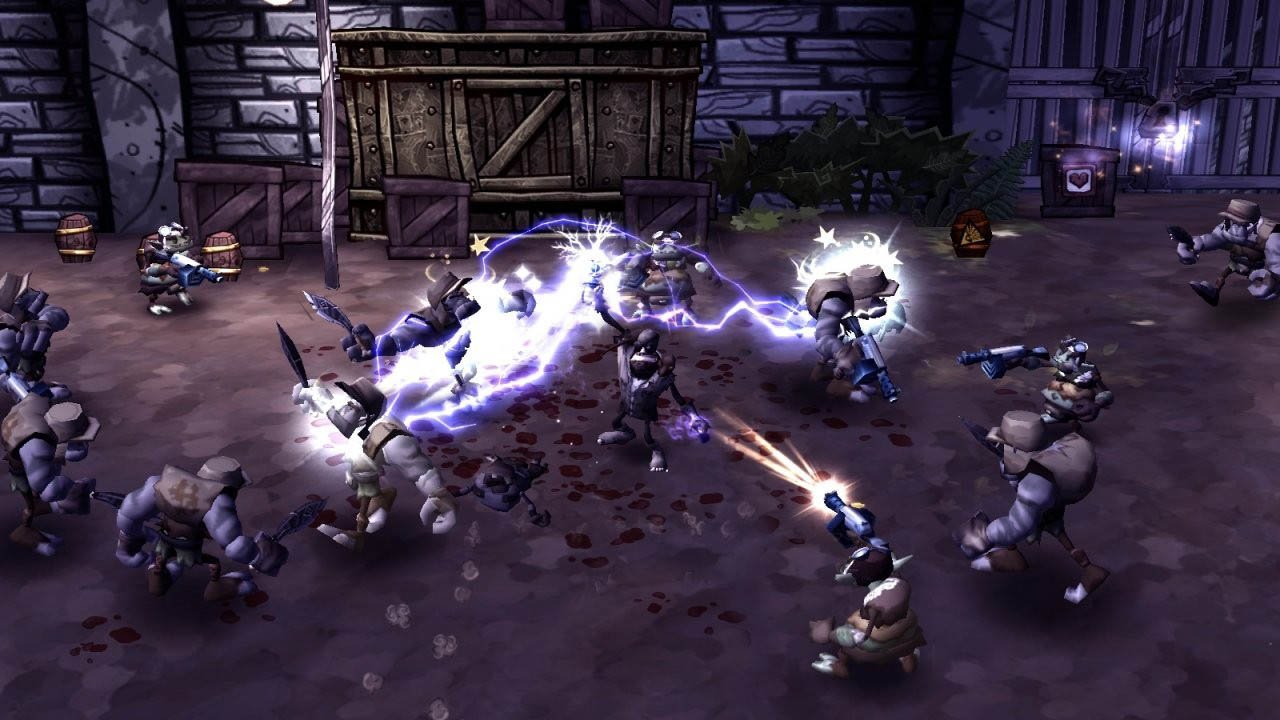 To be perfectly honest, there’s no reason not to buy DeathSpank. The latest downloadable action-RPG from Monkey Island creator Ron Gilbert features hilarious writing and serviceable gameplay, which is far more than you normally get for $15. With that said, the overall experience is so mundane that it almost defies description.

DeathSpank is the kind of game that fades as soon as the console is off, even if it is a loving send-up of video game absurdity.

In DeathSpank, you play as DeathSpank, a thong-clad hero searching for a powerful artifact known only as The Artifact. Along the way, you’ll fill a bag with orphans while building towards a predictable cliffhanger ending after an epic showdown with the evil Lord Von Prong.

All combined, those tasks comprise perhaps ten percent of the total play time. The other ninety percent consists of side quests only tangentially related to narrative goings on. That’s not a problem, because DeathSpank exists primarily to poke fun at other RPGs. NPCs like Pip Apple and his missing brother Red Delicious all have entertaining quirks and personalities, and there are numerous anachronistic references to things like Las Vegas, cell phones, and World of Warcraft. The humor seldom falls flat, and you’ll always be looking forward to the next outlandish comment.

Here’s where the review gets tricky. Despite all of the self-aware in-jokes, the gameplay adopts many of the same generic RPG conventions satirized in the writing. It makes it tough to formulate criticism because you’re worried that DeathSpank is smarter than you are. Are the flaws indicative of bad design, or are the things that you don’t like deliberately ironic parodies of RPG monotony?

Take, for instance, a series of fetch quests carried out for a sentient tree. To complete every single one, all you have to do is walk across the screen, pick up an object, and then walk back. If you examine the tasks with an intellectual eye, the exaggerated repetition is a curiously poignant send-up of many MMOs. That just doesn’t make the chore any less tedious while you’re actually playing.

Fortunately, all such shortcomings are relatively minor. DeathSpank inundates you with new weapons and potions at a dizzying rate. You’ll pick up a better sword with every alternate step, and keeping tabs of everything you’ve acquired breaks up gameplay far more often than anything your enemies are able to do. You can auto-equip the best armor, but that won’t help you manage your offensive arsenal.

The stark power differential between each of the twenty character levels can further create some slightly unbalanced situations. Creatures that had been giving you lethal trouble will suddenly drop in one hit, while anything even remotely beyond your status will be equally dismissive of your HP.

All of that heavy hitting demands an obnoxious amount of healing. Consuming various foodstuffs like root beer floats and pizza takes an agonizing eight seconds that literally everything can interrupt. The act of survival forces you to spend too much time either running away or running in circles while chowing down on fries.

The healing process will also make you peculiarly hungry. The gluttonous sounds that accompany each meal make every snack seem delicious, exponentially magnifying your cravings for a hamburger.

The cumulative issues prevent DeathSpank from reaching more memorable heights. It’s always fun and functional, but in a perfectly forgettable way in which there are no glaring problems or stellar gameplay moments. The hodge-podge of good ideas are held together with minimal structure, meaning that DeathSpank has little internal momentum beyond your own desire to explore and listen to irreverent dialogue.

To that end, DeathSpank does do an excellent job of cultivating that desire with an accessible flow of action for its entire 15 hours. There are no loading screens and combat takes place in real time, so there are no artificially imposed disruptions. Enemies respawn after a comfortable delay, and alternating between the block button and an attack button will usually be enough to take them out again. You can equip up to four weapons and four consumable items at any given time. It’s not the most complex system, but it’s deep enough to allow for several different strategies.

A network of outhouses serve as both respawn checkpoints and teleportation hubs, making it easy to get from one side of the map to the other. The inventory grinder that processes spare items into cash usefully eliminates return trips to the shop and keeps the focus squarely on the fighting. Meanwhile, fortune cookies allow you to buy hints whenever you get stuck, so you’ll always be able to bribe your way out of a situation without having to tax your brain. The system is incredibly helpful and makes the game far less frustrating than it otherwise might have been, as long as you don’t go in expecting a puzzler.

If you’ve got a second controller, you can bring Sparkles the Wizard into the fold for some local co-op gameplay. It’s enjoyably silly in limited doses, but it doesn’t have lasting appeal. Sparkles only has four magical abilities, doesn’t level, and can’t interact with any of the NPCs, so your friends probably won’t want to play through the entire adventure as a rigidly defined second banana.

DeathSpank has a unique visual style reminiscent of a children’s pop-up book written by Tim Burton. The stylized blend of 2D structures and 3D landscapes has a consistent, offbeat charm. Still, I hesitate to label it as a pro or a con simply because its value is a matter of personal taste.

That’s ultimately true of the game itself. If you find the notion of a terminal slap to the backside to be even remotely amusing, you’ll probably enjoy DeathSpank. It’s a solid title with genuine humor that moves quickly and doesn’t wear out its welcome. You’re not missing too much if you give it a pass, but it’s one of the better games of the summer and is well worth the budget-friendly price of admission.

It’s a solid title with genuine humor that moves quickly and doesn’t wear out its welcome. 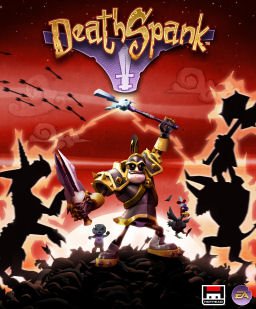