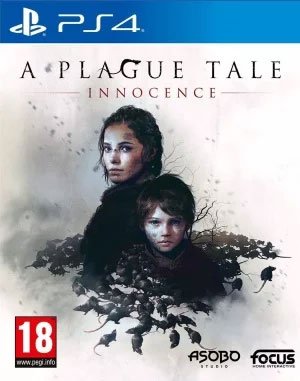 Generally, the initial reveal, or first look at a brand new game, fills me with a level of intrigue that no other medium seems to capture. Sadly, seldom do these games, actually live up to the wild expectations of my imagination.

A Plague Tale: Innocence, from Asobo Studios, surprisingly manages not only to be an interesting game but one that for the most part, had me invested in its world, during the 16 or so hours it took me to complete it. A Plague Tale: Innocence, eloquently brings to life a medieval-inspired 14th-century French countryside, with characters, reminiscent of a certain HBO show, minus the woefully ill-prepared dragons.  As the name implies, A Plague Tale’s narrative is heavily inspired by the Black Death, albeit with a supernatural twist.

Players assume the role of Amicia De Rune, a 15-year-old girl, tasked in protecting her young brother, Hugo, from the clutches of the Inquisition, who are after the boy, believing his blood is somehow intrinsically connected with the plague that is presently ravishing the lands.  My favourite aspect of Plague Tale’s narrative is how Asobo Studio manages to trickle in the supernatural points within the broader, overall plot.

The game doesn’t shy away from its supernatural elements, hinting at the possibility of something being awry from the very beginning of the game, and I don’t just mean the plague and the chaos brought on by The Hundred Years’ War. This ease into the uncanny and supernatural translates into gameplay, as well. Instead of featuring a typical combat system or a reliance on inhuman powers, instead, a Plague Tale: Innocence arms Amicia with a sling, which for the vast majority of the game, acts as the players only means of a direct attack.

A sling may not sound like the most exciting weapon in a game set against a backdrop that heavily features armed soldiers and medieval knights — however, this vast disparity in power is precisely what makes the sling such a powerful weapon, adding a sense of tension that never gets old. At its core, Plague Tale: Innocence is a stealth-action game, meaning players can be reasonably flexible in how they approach each situation.  Although, not as open-ended as games such as Metal Gear Solid V, thanks to a well-implemented crafting system, Amicia’s sling becomes a viable weapon, enough to take down even, armoured-glad enemies, by games’ end.

In terms of enemy types, Plagues Tale eases players in with pretty competent but easy to avoid (or kill) soldiers, featuring exposed fleshy bits, perfect for Amicia to take out with a well-timed hit.  Holding the left trigger pulls up a crosshair that turns yellow, indicating wheater or not the target will be hit or not.  As players’ progress the game,  Amicia will gradually pick up on different alchemic recipes, a prevalent theme in the game, which in terms of gameplay mechanics, ups Amicia’s arsenal from just rocks.

Most of the recipes at Amicia’s disposal are meant to augment her sling. For example, eventually, players will encounter enemies that don helmets, which rocks simply can’t penetrate. Instead, Amicia will rely on her budding alchemic skills. Luckily, some Devarontis, which is a concoction composed of potassium nitrate, derived from saltpetre (one of several collectible resources within the game)  is more than capable of causing most guards to remove their headgear, due to its toxic, burning nature.

Undoubtedly, the most noticeable and recurring theme within A Plague Tale: Innocence is its illusions to death through the use of plague harbouring rats. Not only do the rats act as the most significant hazard for both Amicia and company to navigate through and thwart but they also act as a means of survival, when used against the opposing forces of the Inquisition.  An early example of this is through the use of the Odoris recipe.  Like Devarontis, Odoris is a powerful alchemic compound that when in use, unleashes a potent pheromone-like substance that attracts the savage rats, meaning enemy guards exposed to the stuff, generally end up dead.

The grisly depictions of death and decay at the hands, or rather paws of the rats, tread a fine line between cool and macabre, thanks in part to the photorealism the game strives for in its visual identity.  Watching enemies fall to their feet, quickly getting swept away in a current of fluidly animated rats, transforming into a pile of torn flesh and viscera in a matter of seconds, truly feels unique to the game, for better, or for worse.

On the note of photorealism, A Plague Tale: Innocence supports HDR, which can be hit or miss, given the title. Thankfully, Asobo’s HDR implementation feels like a welcome addition, at least, after going into the settings and finding the sweet spot between well-lit but not overexposed.

Finally, the HDR within the game feels especially warranted as it helps bring to life the interplay between the dingy plague-infested ruin of the world with moments of serenity and calm, further cementing the titles core philosophy in portraying life and death, with good and evil.

Like its impressive visuals, A Plague Tale offers an equally impressive soundtrack, one that captures the cinematic feel of the game in both its quieter, sombre moments and its larger, more bombastic sequences.  The voice acting in the game is also of quality, especially for the two stars of the title, Amicia and Hugo, whom both feel well realized and believable in their familial love and bond for one another, thanks to the banter between the two, throughout.

My only real complaint with A Plague Tale: Innocence, can be found towards the ending of the game. For the most part, the title feels quite grounded in reality, however, the promise of a supernatural presence, ultimately manifests in a strange manner, not really paying off in the way the game hints at, instead, the game just sort of ends, perhaps due to Asobo wanting to leave room for a potential sequel.

Additionally, by the end, Amicia ends up feeling a bit too powerful, meaning that most enemies, including the final boss, ends up feeling a little underwhelming, if not trivial.  In other words, the tension of the sling that permeates throughout feels somewhat diminished by the time the credits roll.

Readers looking for an engaging and dark story, one that isn’t afraid of embracing the harsh realities of the middle ages during its tail end, are encouraged to try A Plague Tale: Innocence. Those who can’t stomach seeing more rats on screen than those found in the sewers of NYC, or for those who aren’t fans of the stealth-action genre, should at the very least, get a friend to play the game for them.

Readers looking for an engaging and dark story, one that isn't afraid of embracing the harsh realities of the middle ages during its tail end, are encouraged to try A Plague Tale: Innocence.
REVIEW SCORE
8.5
File Under: