A Walk in the Dark (PC) Review 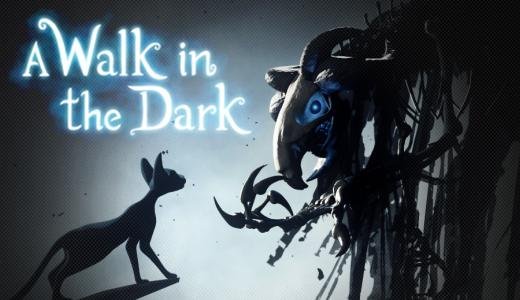 The name A Walk in the Dark seems to have been a cruel prank on the part of Portuguese developer Flying Turtle Software. Yes, for the first dozen or so levels you’d be forgiven for thinking the game would be “a walk in the park,” but by the end the average gamer will be out for blood.

You see, A Walk in the Dark is a hardcore platformer in the same vein as Super Meat Boy, and while it isn’t as punishingly difficult, the later levels will still present a serious challenge. The game pairs this skill-testing gameplay with a surreal aesthetic ripped straight from Limbo, almost entirely consisting of dark, 2-D silhouettes. It might seem like an odd pairing, but such minimalism allows you to focus completely on the action — an advantage you will need.

The game’s plot is even simpler: girl gets taken to the dream world by some kind of magical skeleton, and you, a particularly acrobatic cat, have to traverse 100 levels to save her. You achieve this entirely via platforming, as your only available actions are to run, jump, crawl and wall-jump. The game throws all the usual hindrances at you: spikes, saw blades, disappearing platforms and various kinds of turrets. There are a few basic enemies, but they act more like obstacles, moving in predictable patterns and with no AI to speak of. Comparisons to Limbo become even more obvious when the game throws in gravity-flipping halfway through.

There are a few stages where you play as the girl wandering the dream world, flipping gravity at will, but they are easy, short and few in number. If you’re masochistic, there are also a series of bonus “shinies” you can collect in each level, but for most people the game will be taxing enough without complicating things.

When it works, A Walk in the Dark conveys a wonderful sense of grace. The most basic manoeuvers require you to get within a hair’s breadth of a mass of spikes before leaping into the air, rapelling off a wall and landing on the only safe square-foot in sight. There’s also good tension during the cave levels, in which you’re driven forward at a sprint and need to leap between the floor and ceiling to stay alive. The game feels like it rewards skill, patience and timing — most of the time.

However, at some points the difference between death and a successful jump is so small, the game feels like it rewards only luck. That is a particularly egregious failure for a game like this, in which you are expected to die and die and die again. That’s fine, as long as you feel that your deaths are your fault, that the goal is achievable and that you are improving. That’s not always the case here.

Mercifully, the game makes your many failures as painless as possible. You die in a brief puff of smoke and immediately reappear at the start — no gaudy sound effects, no “YOU LOSE! TRY AGAIN?” prompt. The presentation helps as well: the backgrounds are soft and deep, although there are only a handful of them. The music is the definite high point, making extensive use of piano, percussion and strings to suggest a tranquil, enchanting loneliness. The last track, which plays over the final 10 levels, mixes it up with a militaristic drum beat that really sets the mood for a final confrontation.

Sadly, that final confrontation never happens. The game just slams to credits as soon as you reach the last goal. A boss fight against the mysterious kidnapper would be out of place, but there isn’t so much as a cut scene of him skulking off into the darkness, or of the girl and her rescuer escaping the dream world. As it stands, the game lacks resolution and feels a bit unfinished.

Of course, only so much can be expected of a tiny team of seven. The game also sells for about $6.50, which would be a bigger advantage if there weren’t dozens of great games at that price point or better available on Steam these days. In fact, there are plenty of free browser games that rival it in quality and length. While A Walk in the Dark isn’t a bad game by any means, its lack of depth makes it a must-have only for the artistic, cat-loving, hardcore platforming crowd.

While A Walk in the Dark isn’t a bad game by any means, its lack of depth makes it a must-have only for the artistic, cat-loving, hardcore platforming crowd.
REVIEW SCORE
6
File Under: Action, Fantasy, Indie Game, Platformer