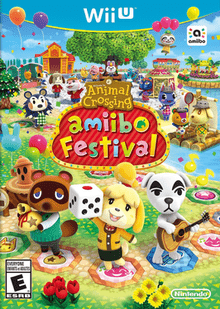 I’ve always had a hard time selling Animal Crossing, as a game, to people. When asked why I like it so much, I can never seem to answer beyond “I don’t know.” It may be its simplistic design, gameplay that’s not demanding, or the aesthetic that’s cute and mellow. In terms of gameplay, there’s not much room for expansion, and it makes me happy to see the franchise branching out into new and interesting territories. Animal Crossing: Amiibo Festival is definitely that.

Animal Crossing: Amiibo Festival takes the form of a board game, and right away I WILL NOT waste my time drawing comparisons to Mario Party because Amiibo Festival ISN’T Mario Party nor does it HAVE to be. Players play through one calendar month, each round of turns equaling one day. The goal is to earn the most Happy Points by the end of the month. As players traverse the board, they’ll land on tiles that can reward or reduce Happy Points, Bells (Animal Crossing’s form of currency), or both through little stories. Despite what you think you know, money can buy you happiness in Amiibo Festival as at the end of the game, every 1,000 Bells get converted into one Happy Point.

In proper Animal Crossing fashion, each week will have random visits from different characters in game. Visits from Crazy Redd allow players to purchase single-use cards or visits from Katrina can earn players week-long Tarot cards that can reward or reduce Bells or Happy Points if players roll the number on the card. Each month has related holidays and players can earn bonus points for participating in Halloween, Christmas, Earth Day, or a variety of others. Outside of the holidays, each month has Fishing Tournaments and other Animal Crossing events that can earn players more Happy Points.

The other key component in Amiibo Festival is the Stalk Market. Every Sunday, Joan the Warthog shows up to sell her turnips. There’s actually quite a bit of strategy in this as each week base prices may be different, and once the Stalk Market opens, each tile of the board has different prices for turnips. There’s no telling when the market might spike or crash, so deciding when to sell becomes a delicate balance of chancing a dice roll for a better price, or selling when it’s better safe than sorry.

Amiibo Festival doesn’t inherently have a competitive element, and I feel that’s very much in the theme of Animal Crossing; however, there are small ways you can mess with other players. Landing on the same space as someone else creates random “meeting” events that can be detrimental or beneficial to both players, or in some very sweet cases, extremely beneficial to one player and vice versa. I find a lot of fun and humour can be had actively rooting for your friends to land on bad spaces, even if you can’t actively influence their demise.

One of the stranger and extremely poorly implemented features in Amiibo Festival is the structure of the multiplayer. If you choose to play alone, the game automatically assigns three computers to play against. However, if you have a friend, you can only play 1v1; the game doesn’t assign characters to fill in the gap. This is incredibly poor game design and significantly restricts the amount of fun and challenge one (or two) might have with the game.

The main shtick of the game, as found right in the name, is the Amiibos. Animal Crossing Amiibos are required to play the game as they act as the game’s pieces. Initially, I was worried this would be a full priced game that was reliant on Amiibo support (willing to let it go if it was only a $30 game that required you to buy Amiibos), but fortunately, Nintendo didn’t totally sell out with this and Amiibo Festival is bundled with two Amiibos so anyone interested in picking it up will be able to play alone or with a friend.

Honestly, I thought I’d find the Amiibo use kind of annoying, but there is a simple charm in touching an Amiibo to the GamePad as if you’re moving a piece on an actual game board. At the end of each game, EXP is stored on each Amiibo which unlocks different outfits for each character. Amiibo Festival is also compatible with Amiibo Cards which are mainly used for additional mini-games outside of the main board game. These are actually pretty fun, especially during the Acorn mini-game as you’re frantically trying to swap cards in the middle of a heated game of cat-and-mouse.

I honestly don’t see where all the hate for this game is coming from; Animal Crossing: Amiibo Festival is an enjoyable board game that blends in the elements of Animal Crossing perfectly. While it’s a bit slower and not as cutthroat as other board games, I had fun playing it, both alone and with friends and actively want to go back for more.