A World in Progress 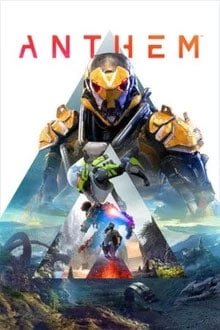 When Anthem was revealed to the world during E3 2017, I was thrilled to see Bioware return with a brand new IP. No longer tethered to the Mass Effect franchise after Andromeda, I was ready and waiting to get my hands on powerful mech suits and fly around the exciting ecosystem they promised to deliver. While Bioware has definitely succeeded in creating some exciting features and mechanics within Anthem, much of its world and systems are still in the process of being developed in future updates, creating a half-baked experience for players at launch.

Anthem attempts to tell a gripping tale of adventure and discovery. Players are put in the role of a Freelancer, the term referring to a pilot of the world’s powerful Javelin exo-suits. After surviving a large cataclysmic event, players are tasked with rebuilding the lost reputation of the Freelancers and defeating the forces of the Dominion, a faction who will stop at nothing to control the infinite power held within the Anthem of creation. The 11-15 hour campaign ultimately boils down into a generic story of good vs. evil, but what is truly missing is that Bioware charm of captivating characters and unforgettable missions that I still fondly remember from the Mass Effect Trilogy and Star Wars: The Old Republic. Outside of a few notable characters, a majority of Anthem’s cast lacks their own charisma. Instead, most of them are there to provide context to their role in the world and how they affect it.

What Bioware expects players to be hooked on the most is Anthem’s unique world, which will change and evolve as the game is updated with new content post-launch. The road map of future content sounds genuinely exciting, as Bioware has plans to introduce new events, systems and more mission variety over the coming months. As a base experience however, this world lacks a sense of identity and life despite being visually impressive. With only one biome to explore at release, the jungles, waterfalls, and ruins of Anthem quickly blend into each other and failed to immerse me when I explored more areas of the map. Flying around in my Javelin for the first time was definitely a powerful moment for me as a player, but even that unique mechanic lost most of its luster when it was primarily used to extend the runtime of missions.

Anthem is built up as a four-player multiplayer experience and gives players multiple incentives of XP and better loot if they pair up with strangers and friends alike to complete the game’s various expeditions. Obtaining new gear is addictive, but players won’t see the true value of collecting more powerful weapons and augments until they reach Anthem’s true endgame at level 30. This is where players will begin to uncover new rarities of weapons, packed with buffs and benefits to imbue their Javelins with overpowered abilities and min-maxed stats.

As of release, the endgame of Anthem consists of replaying the three available strongholds at launch, and running laps around the hub world of Fort Tarsis for contracts offered by Freelancer support factions. While shallow in variety, each of these activities has six levels of increasing difficulty to progress through and gives players a higher chance at obtaining the best quality loot in the game. The real challenge of Anthem’s endgame will begin to creep up in the Grandmaster difficulties, which is where Freelancers will need to coordinate their team composition and build their Javelins to fulfill different roles in combat if they have any hope of defeating the significantly buffed enemies. The aspect of this endgame that disappoints me is that there is nothing exclusive to work towards or a reason to grind out just one of the strongholds. While these are not considered raid-like content by the devs, currently all of the expeditions possess the same loot pool of items that can potentially drop, which creates a lack of incentive for me to make goals and weapons to work towards.

The four playable Javelins are without a doubt the true highlight of Anthem’s experience. I love both their unique designs and their interplay with one another. The Ranger is the jack-of-all-trades DPS, capable of wielding nearly every weapon type in the game and able to rain down hellfire on large groups of enemies with a volley of missiles. The Colossus is the immovable tank, equipped with a shield to withstand any attack and armed with powerful cannons that can devastate the world’s strongest enemies with ease. The Interceptor is the most agile of the Javelins, focused on ducking in-and-out of battle with a flurry of projectiles and melee attacks. The Storm is the Javelin I encountered the most during my journey through Anthem, and while it may be fragile, their power over the elements made them key in executing powerful team combo attacks.

Combat is one of the few parts of Anthem that feels genuinely great out of the gate. No matter which Javelin players pick, they each possess a fun set of unique abilities and combo potential. Using abilities feels great and delivers a great sense of impactful force when you blow something to kingdom come or crash down on a mob of enemies with a melee attack from up high. This is also where flying and hovering play nicely within the game’s world. Javelins may not be as nimble or athletic as Warframes, but they can still dodge, maneuver, and hover their way into an advantageous position in a fight. Coordinating well with teammates will execute the extremely satisfying combo attacks, which deal massive damage to any foe and highlight the games impressive particle effects. There are multiple ways to trigger these attacks, but most are set up by priming enemies with an elemental affliction and then “detonating” the mob with a large explosive, such as the Colossus’ ultimate cannon ability.

While combat felt great, that’s only when I was actually able to play the game smoothly. Heading into its release date on the 22nd, Anthem is still rife with bugs, glitches, and questionable quality of life design decisions that dampened my overall experience. Load screens, in particular, are one of my largest pet peeves with the game. Everything I do as a player requires a loading screen, whether it is opening a menu, customizing my Javelin, or praying I get into a mission fast enough. The most egregious ones were when I would load into a game late after waiting for 2-3 minutes at a time, only to be thrown into another loading screen in 20 seconds because I spawned too far from my team.

When I wasn’t contesting with loading screens I would have to put up with the game’s assortment of bugs and glitches. Despite all the time spent loading into a mission, I would spawn into areas with one or multiple of the following: missing textures, missing geometry, no audio, missing dialogue, enemies weren’t present but could damage me, rubber banding, server connection issues, missions would fail to exit despite the objective being completed, missions failed to start at all. As of writing this review, these bugs are appearing less frequently as the early access period continues and a day one patch is on its way to address many of the games technical problems, but I still fully expect these issues to reappear in full force when the game officially releases to the masses as the dedicated servers try to handle the oncoming traffic.

A large unanswered question about Anthem leading to release is how the game was going to handle microtransactions, specifically pricing for its cosmetic items. Currently, epic javelin skins can be purchased for 61,000 in-game currency or purchased outright for about $8 USD. The pricing for emotes, skins, and textures have definitely improved since the community leaked a screenshot of one of the game’s previously proposed pricing iterations. That doesn’t mean this system won’t change with time though, especially when Epic gear is not the highest rarity players can obtain. However, I believe the game actually possesses a good balance of handing out free currency as well. Players will begin with a bank of 40,000 coins in their account, and after I completed the critical path and every side mission, I had racked up just over 116,000 coins after 24 hours of play, without the added bonus of the game’s weekly alliance system.

Despite its abundance of bugs, narrative shortcomings, and an overall small pool of content, I still enjoyed the fun gameplay of Anthem and plan to revisit it after the game has developed a larger suite of content and events for me to experience. In its current state though, the experience is one I would recommend waiting on for people on the fence because it doesn’t quite deliver yet on what Bioware envisioned for this game. Anthem reminds me in many ways of Warframe’s launch on PlayStation 4, where nothing clicked with me completely initially and I dropped the game after only a few hours of play. Once I made a third attempt to join into the fray with the release of “The Sacrifice” on PC, all of the pieces began to fit in place and I became addicted to both its fast gameplay and fleshed out lore. I fully believe Anthem can reach the same heights of Destiny and Warframe if, given the time to grow properly, I just hope EA doesn’t pull the plug too soon.

Despite its myriad of issues, I still enjoyed the fun gameplay of Anthem and plan to revisit the game after it has developed a larger suite of content and events for me to experience.
REVIEW SCORE
7
File Under: