Batman: The Telltale Series should have felt like it also ran in the Batman gaming sweepstakes following Rocksteady’s amazing Batman trilogy that just wrapped up last year (that’s right “trilogy,” that stupid Arkham Origins doesn’t count). After all, the Arkham games delivered satisfying Batman combat that fans didn’t even dare to dream of in previous gaming generations, buckets full of fan service, and some compelling narratives worth exploring. However, they were first and foremost action games, and the reason that the Dark Knight has remained a pop culture fixture for decades is because the character is remarkably complex and the storytelling opportunities are filled with depth uncommon in the superhero genre.

The folks at Telltale have delivered one hell of a Batman game with their first Batty season and a major reason was the focus on narrative, psychology, and morality. They poked at the Bat myth and found new angles that not even comic book writers have explored. It was a fascinating journey for Bat-fans filled with surprises uncommon in games based on popular pop culture properties. Given that the series would be primarily consumed by those who have encountered countless Batman tales in the past, this was a welcome surprise and a deeply satisfying experience. Well done gang, even your typical tech issues are entirely excusable given everything that you did so right.

Getting into even mild plot descriptions for this episode seems unfair. After all, it’s pretty much all pay off for plot threads that have been stretched out over the four previous episodes. It even starts with a potential spoiler given that the opening of the story is dependent entirely on the choice that players made at the end of episode four of Batman: The Telltale Series. So I’ll be talking it light when discussing the specifics of City Of Light. All you really need to know is that Gotham is burning, various villains are running wild, and Bruce Wayne needs to come to terms with some incredibly difficult personal truths. You know, all the stuff of a good Batman yarn. 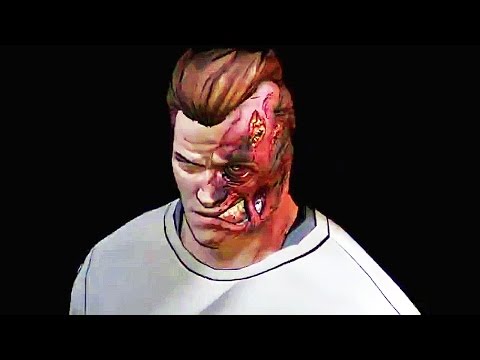 The pacing issues that have plagued a few of the previous chapters in this series due to the secret-concealing realities of long form storytelling are thankfully all but non-existent here. The Telltale writers hit the ground running and nimbly wrap up one story after another until everything falls into place. A new villain has been introduced who fits in well with the regular rogues, which is pretty amazing given the high standard of the characterizations inherent to this universe. The writers nailed it—they just get the wounded psychological appeal of this series as a whole. All of the villains played with in Batman: The Telltale Series are oddly empathetic in one way or another. City Of Light presents Gotham as a land of broken toys where no one is fully guilty or innocent, least of all Bruce Wayne. It’s a heartbreaking and intriguing exploration of the popular mythos that the Telltale crew handled with care and confidence. Kudos especially to their take on The Penguin, who is drawn out beautifully here just in time for a curtain call.

While the narrative is handled wonderfully in City Of Light, the climatic tale also takes advantage of the track laid up to this point and hits the ground running by delivering a story driven by action. There are some excellent set pieces here as Batman beats his way to the finish line and the Telltale style of quicktime action remains smooth, stylized, and cinematic. The visuals are gorgeous, even in this ambitious chapter with the deliberately comic book aesthetic being pushed to epic extremes without breaking the core mechanics. It all flies by in a rush of Batty joy, tickling the brain n’ heart while still delivering all of the ass-kicking that a good Batman game needs.

There are flaws of course. The chapter and season end rather abruptly on a cliffhanger to set up season two—which was mildly disappointing. Sure, it’s the nature of comic book storytelling to always leave them wanting more and desperate to see the next story, but given the way the season elegantly wrapped up elsewhere, it felt like a bit of a cheapshot to avoid a satisfying ending in favour of a built-in advertisement for season two. Oh well, the nature of the beast I suppose. Likewise, the game was a little choppy with some framerate drops, but less so then previous chapters of Batman: The Telltale Series and something that is just sort of to be expected from Telltale. It’s never that bad. The “connect-the-dots” detective sequences proved to be a story hopping drag again, which was particularly frustrating in a chapter that should be a breathless rush to the finish line. When this series returns for the practically inevitable second season, the Telltale folks would be wise to revise their detective mechanics or ditch the concept all together.

Thankfully, the flaws here were minor. Batman: The Telltale Series ended on a high note. As a matter of fact, City Of Light just might be the best chapter of this whole damn series. Anyone who doubted that Batman would be suited to Telltale’s adventure game style can feel free to eat crow. These folks clearly love and respect the character enough to do it right, while also loving and respecting their players enough to take risks with an established property to deliver genuine surprises. This was one hell of a ride that any and all Batman fans should take. It’s exciting to think that Telltale has plans to continue telling stories in this universe. They should only get better at playing in this sandbox now that they’ve had a season to experiment. To be blunt, Batman: The Telltale Series exceeded my expectations in nearly every way. Buy it, play it, love it. You won’t regret it.