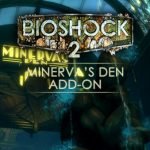 Bioshock 2’s downloadable content this past year has been focused entirely on the multiplayer mode. While a fun diversion, the atmospheric single-player story and environments are what most people come down to Rapture for, and thankfully this has been addressed with Minerva’s Den: a stand-alone, single-player chapter written and designed by 2K’s Steve Gaynor.

The episode begins as a Big Daddy code-named Subject Sigma wakes up on the ocean floor. As he grabs a starfish off of his face and struggles to lift the piles of wreckage off his body, the player is immediately reintroduced to the tragic Big Daddies, whether sentenced to their protector roles in Rapture or roped into Brigid Tenenbaum’s scheme to escape it.

Minerva’s Den chronicles what Tenenbaum’s been up to since she made her brief cameo at the beginning of Bioshock 2, but focuses on two new characters, Charles Milton Porter and Reed Wahl. Porter is the man in your ear for this mission, as he leads you through the Den and Rapture Central Computing. This area is home of The Thinker, an Adam-infused supercomputer designed by Porter and Wahl. Porter has been ousted thanks to Wahl’s politicking, and he needs Sigma to get it back for reasons that are gradually revealed throughout the episode’s four-to-seven hour duration.

Minerva’s Den is split up into two generous levels and one smaller end-section, and despite the relative lack of unique textures the area feels quite distinct from the main game. Machinery reigns supreme: giant computers fill the hallways and offices, and arcane contraptions spit out reams of data on printing paper. Broken down “vacuum bots” contain treasure once cracked open, making for a quick and dirty Achievement quest. The most interesting area is probably McClendon’s Robotics, whose 1950s “jukebox” decor and terrifying Robotic Little Sister prototypes make it look like the Team Fortress 2 Engineer’s workshop on a really bad day.

The gameplay in Minerva’s Den is nothing new, since you’re still an Alpha Series Daddy and have access to almost every weapon and ability from the main game. The speed at which you’re introduced to new tonics and plasmids is astonishing, and all the more necessary since Splicers are more numerous and aggressive than usual. Upgraded versions of your weapons are scattered around the levels, allowing for some entertaining set piece Notably, you will find an upgraded version of your drill lodged through the corpse of a very unlucky Splicer.

The new items are nice, but not game-changing. The Ion Laser is a natural extension of the laser cutters we’ve seen Rosie use to repair Rapture’s leaking infrastructure. It’s got the full complement of alternate ammo, including a Burst Cell that allows you to charge up and unleash a huge blast, Mega Man-style (it’s even blue!). The Gravity Well plasmid is less impressive, although it’s fun to suck in enemies and objects for a quick fit of ragdoll physics at their finest. If it weren’t for several doors that dictate its use to proceed, I wouldn’t carry it around.

Speaking of which, the episode’s short duration makes it harder to ignore the reliance on “this door is locked, find the key/plasmid, repeat” formula. Adam Gathering sequences are here in full, although after all the similar moments in the main game and the Protector Trials DLC it’s starting to wear thin. The Lancer Daddy wields the Ion Laser gun you have while also possessing a blinding flash bang manoeuvre, but the most memorable thing about the guy is probably the darling red cape he wear

You’ll probably have read in a dozen or so online reviews that the plot is better than that of the main Bioshock 2 game. It’s not entirely accurate, as the best moments of Delta-Lamb aren’t topped here. But Minerva’s Den benefits from its shorter playtime, avoiding unnecessary sub-plots and detour The end result is a tightly-wound package of all the action you can expect from Rapture, coupled with a deeply personal story that hits all the points that a well-written short story or novella aims for.

The end result is a tightly-wound package of all the action you can expect from Rapture, coupled with a deeply personal story that hits all the points that a well-written short story or novella aims for.
REVIEW SCORE
8
File Under: Bioshock, DLC, PlayStation, Shooter