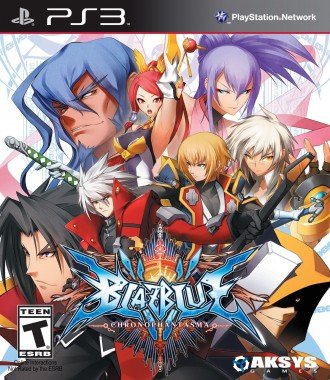 Fighting game aficionados must be genuine masochists. After playing Street Fighter IV, Persona 4: Arena, Marvel vs. Capcom 2 and Tekken Tag Tournament 2, my confidence reaches an all-time low whenever the term “online” is mentioned. While this is not the case for all (champions, enjoy it), many can attest to the steep learning curve the genre offers. Yet nothing feels quite as great as pounding the living hell out of an opponent using your newly mastered 14-hit combo. Such is the dilemma with Blazblue: Chronophantasma (and fighting games in general). It’s a hot, jam-packed anime mess that has no apologies for its self-aware fan service or its over-the-top, offensive play-style. This is why people love Blazblue, but also why people seem intimidated by it. I fortunately don’t fall into the latter category, as its challenge as well as its gorgeous style kept me playing. Whether this is your first attempt at a fighting game or you’re already a grizzled veteran, Blazblue delivers on both ends. The unfortunate side is that those new to the franchise will have a tough time catching up and fully understanding the complex and detailed story mode.

There are timeloops, crazy vampires and tons of wars in here (and that’s just the tip of the iceberg). The fine folks at Arc System Works have created an entire world filled with lore and intricacies, rather than the standard bare-bones tale Capcom and others try to present. Yet it’s clear that those unfamiliar to the franchise will have a hard time catching up. Despite a mode called “Teach Me, Miss Litchi!” that helps brings scrubs up to speed, it can be hard to comprehend all the Blazblue universe has to offer. Fortunately, those caught up in the series will appreciate the continuation of the story.

In past entries, the story was divided up so that each character had their own mode. Chronophantasma simplified this by having three main arching storylines that intersect, letting the narrative flow in a much more straightforward manner. While some fans might be frustrated by this change, I found it to be a necessary change that hopefully continues in the future.

As a critic I could go on and on about how important Blazblue’s story is, but the majority of players are there for one reason: to kick the crap out of each other. Chronophantasma brings back the zany craziness that Continuum Shift and Calamity Trigger established. All the fights are 2-D and feature gorgeous animated sprites, while many of the characters have been rebalanced with an entirely new look.

New additions include the Overdrive system, which takes away Gold Bursts completely. At any time in the match, players can press all the face buttons to activate overdrive, granting them different abilities to turn the match in their favour. The less health you have the longer the overdrive will last, but be careful as it may be too late if you wait too long. Much of what you’ll find though is the same as past titles, yet there’s enough new content to justify its $60 pricetag. Seven new characters have been added, two of which are downloadable on the PSN store. One of these characters, Kokonoe, is extremely over-powered in every sense of the word. She has two drives and can sway entire matches with a single combo (even more so than usual). This brings a vast array of balance issues in tournaments, resulting in her banning at some events in Japan. Most of the other additions add variety to the roster and make the title that much more appealing, so don’t be worried about finding a fighter that fits your ability. And yes, eighty per cent of the ladies still have massive cleavage. What else would you expect in a game that glorifies anime stereotypes?

Another fantastic element to Blazblue is the amount of content the game provides. There is a tutorial mode where players will learn every little facet the title has to offer. They can then continue their learning in challenge mode, which offers newbies the chance to learn new combos for each character. There is also score attack mode, abyss mode, unlimited mars mode and a full online mode to boot. It’s a lot to process so be sure to take ample time in each mode. The most unusual modes I found were abyss mode and unlimited mars mode. Abyss mode plays like a survival RPG while unlimited mars mode pits you against extremely strong CPU opponents. Both are fantastic and will probably eat up hours upon hours of your time.

Finally, the online portion features matchmaking as well as online lobbies. The online lobbies allow you to choose and fully customize an avatar to walk around a mini-arcade (much like in Japan, only weirder). This level of polish and detail to the online makes it much easier to access and, honestly, much more fun. Just know that if it’s your first time playing against a net opponent, be prepared for a difficult beating.

Chronophantasma is a bittersweet combination. It improves on one of the most creative and beautiful fighters, but makes it hard for newcomers to jump into the community. The story mode should have contained the past two parts in it, but the new overdrive system and characters make up for it. Still, this is once again more of an update than a sequel. But if you have a penchant for fighting games and whacky anime, this may end up being the game you never put down.

Another fantastic element to Blazblue is the amount of content the game provides. There is a tutorial mode where players will learn every little facet the title has to offer.
REVIEW SCORE
8
File Under: Aksys Games