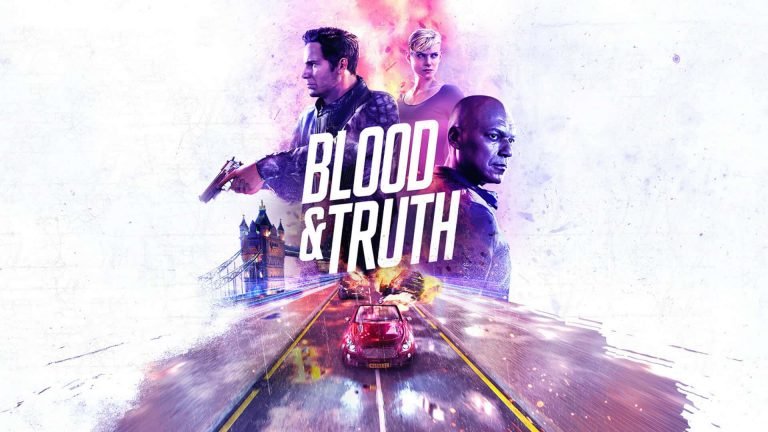 I remember my first experience with Sony’s PlayStation VR hardware, which came in the form of the launch title, PlayStation Worlds. Like many others, it opened my eyes and gave me a brief glimpse into the potential future of the new medium.

Flash-forward to 2019 and Sony London Studio has finally delivered their main course—or at the very least, a much more significant portion of gaming goodness—in the form of Blood & Truth, the true, spiritual-successor to 2016’s London Heist.

For the uninitiated, Blood & Truth follows a typical action movie narrative, in a not-so-typical VR package. The story follows the exploits of Ryan Marks, a veteran soldier who, upon his return from the battlefield, immediately becomes involved in a war with an opposing family following the death of his father, a successful entrepreneur who has left behind a vast empire of wealth—one seemingly too tempting for the underbelly of London to ignore.

Blood & Truth aptly employs a prolepsis approach in its storytelling, with Marks, the player character, held for questioning, slowly piecing together the whole story.  Before talking about gameplay, I must commend SIE London in its thoughtful approach to accessibility and comfort.

I live with a degenerative muscle disease, meaning over time I’ve lost the strength required to hold up my arms properly, making motion-oriented games, particularly those that utilize the PlayStation Move controllers, a hit-or-miss affair.  Although not perfect, Blood & Truth‘s comfort settings, specifically its cinematic difficulty setting, granted me an overall pleasant playing experience while still getting to use the Move controllers.

Despite fully supporting the standard DualShock 4 controller, the Move controllers are both the best and worst thing about Blood & Truth. Like London Heist before it, Blood & Truth is an action shooter that takes advantage of dual Move controllers, acting as the left and right arm of the player.  Unfortunately, due to the reliance on hardware designed for legacy hardware (PlayStation 3) Blood & Truth features limited movement, akin to a point & click adventure game, where players can move horizontally using the face buttons of the Move controller—or forward, although, only in specific locations indicated via gameplay markers.

The limited movement isn’t necessarily a bad thing, as SIE London have done their best to ensure most areas within Blood & Truth are densely packed with things to interact with or enemies to snuff out. This approach to design is mostly successful, as the individual levels are structured in a way that breaks up the gunplay sections with areas that feature strictly exploratory sequences, making for a decently paced experience.

At its worst, the gunplay sections within Blood & Truth can feel a bit like a shooting gallery, reminiscent of old-school lightgun titles such as Lethal Enforcers and The House of the Dead series. Thankfully, despite its constraint nature, the shooting sections within the title never felt like they were outstaying their welcome, partially due to every weapon in Blood & Truth requiring the player to reload, holster, or otherwise interact with in a way that acted like an analogue to the real world through the use of the dual Move controllers.

Mirroring the cliché but fun story, Blood & Truth borrows several classic shooting game tropes such as a bullet time mode, which can be triggered by simultaneously pressing the Move button on both controllers, in addition to things such as regenerative health and ostentatious but well-implemented sprays or skins for weapons (among other, more meaningful weapon mods).

The biggest draw Blood & Truth has going for it is its meticulous peppering of moment-to-moment gameplay sequences that cleverly require the use of both hands to proceed. Examples of this include actions such as picking locks, setting explosives, and climbing across perilous precipices in addition to more unique situations that let the player toy with other, miscellaneous paraphernalia.

In a way, Blood & Truth harkens back to the days of early, 3D videogames, specifically games like Deus Ex and even Shenmue, in that they offer players a plethora of non-essential but fun things to interact with, aiding in fleshing out the game world as a whole. Blood & Truth punctuates this level of interactive set dressing even further thanks to the nature of VR.

Delivery of lines, motion capture, and overall graphic-fidelity are paramount when it comes to VR experiences, and thankfully Blood & Truth features strong acting across the board, with characters that feel well realized. Their presence in each scene feels real and grounded, even during some of the more batshit, nonsensical action sequences. In contrast to the main cast, most enemies in the game feel rather hollow, which admittedly can become a bit grating at times. Yet in a sense, the pinheaded enemies also add to the hokey, cornball heart of the game, ultimately making them still feel like they belong with everything else within the title.

Priced at a more reasonable, $50, Blood & Truth comfortably finds a middle ground between a full retail release and something more indicative of a smaller, VR experience. Owners of PSVR, especially those yearning for more, after their time with PlayStation Worlds, are wholly encouraged to check out Blood & Truth.
REVIEW SCORE
8.5
File Under: