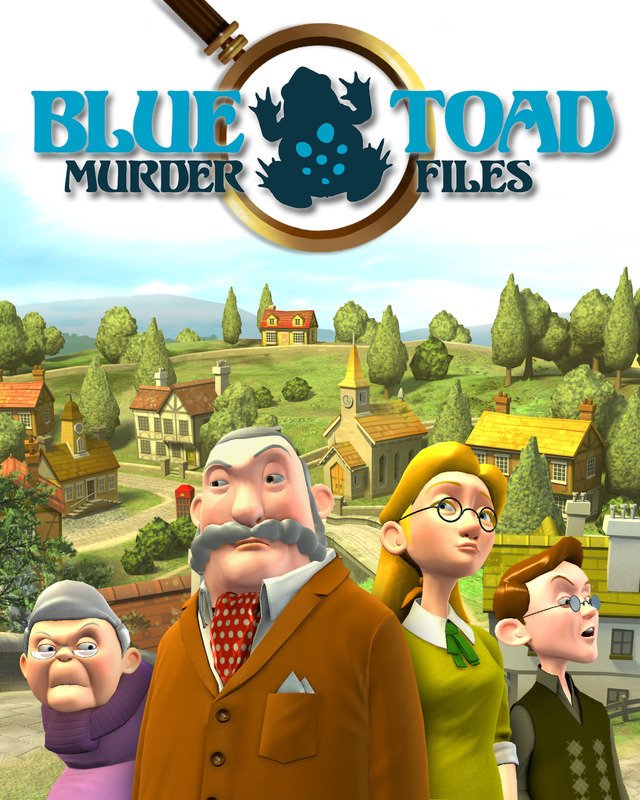 Blue Toad Murder Files is an example of the empowering nature of digital distribution, allowing smaller, more diverse projects the opportunity to be created with lower risk and greater creative control. Capybara Games’ Critter Crunch was a beneficiary of this, both developed and published by the company in Sony’s Playstation Store. Now England’s Relentless Software steps in with another. The result is a charming, whimsical game in the classic vein of Clue, though its long term value is questionable.

Blue Toad Murder Files is an episodic series with a total of six chapter For now, North America only has access to the first three chapters, though for people with European Playstation accounts, the complete series is available. It is essentially the digital equivalent of a board game, with all the interactive bells and whistles associated with a video game. Set in the fictional, relentlessly British town of Little Riddle, the premise starts off with a collection of famous detectives from the Blue Toad agency looking for a little R&R in a quaint English town, only to have the Mayor of the village shot within minutes of their arrival. Over the course the series, players are tasked with solving a series of puzzles and deducing various culprits of minor crimes that tie into the larger mystery.

For a downloadable game, Blue Toad Murder Files shows a surprising amount of ingenuity within a limited framework. The graphics themselves won’t impress anyone on a technical level but Relentless has done a good job of taking numerous stereotypes of the isolated English village and rendering it in a pleasing, satirical, cartoon-like aesthetic. The colour palette is bright and friendly and every character design is caricature of a British cliché, from the classic Old Family Dame to the bumbling town constable.

Dialogue and music are the real stand-outs of the game’s presentation. According to the credits, the entire voice cast is done by one man, Tom Dussek, who does an amazing job of sending up every imaginable kind of British stock character. The music also gets a nod for going the traditional route, an orchestral score composed as a deliberate nod to the overblown, melodramatic accompaniment normally associated with cinema of the 40s and 50 The game’s aesthetic conspires to give players the sense that they are in the middle of a classic British mystery.

The Game is Afoot

Blue Toad Murder Files owes a massive debt to the Professor Layton series on Nintendo’s portable DS system. Both of them share playful puzzle-solving sequences in the service of a larger mystery. The game is structured much like a typical board game, with Little Riddle itself being the “board” in aerial view, while one to four players either co-operate or compete with each other to solve various puzzles and gather clue Unlike the Layton series, the puzzles presented here are at least tangentially related to the plot. For example, where Layton simply presents a puzzle as an obstacle with no context to the plot, Blue Toad presents an obstacle in the form of a pair of old sisters unwilling to part with information they have. They are willing to spell it out, literally, on broken cookies which players must reassemble.

Players take turns, either using individual controllers or simply passing one back and forth. The game is a strictly local experience, which makes sense considering that it is essentially a board game designed to encourage interaction with others in the same room. Language, logic and math puzzles are the main obstacles, and while the first episode can be negotiated with a minimum of brain twisting, subsequent episodes ramp up the fiendishnes In addition, players will also be periodically quizzed on details of the case to make sure that they’ve been paying attention and have their facts straight for the endgame, where all players must finally select a culprit based on evidence gathered.

On the whole, Blue Toad Murder Files is a family-friendly experience that is a fine virtual parlour game. However, it is hit hard by one aspect, and that is that the puzzles and final outcomes of the episodes are fixed. In other words, once the puzzles are solved and the criminals are known, there is really no reason to go back and play the game. At $7.49 per episode or $14.99 for three collected episodes, potential customers need to exercise some caution and judge the lack of replay-ability against the sheer entertainment the game offer Blue Toad Murder Files is actually a fun, enjoyable, shared experience. Unfortunately it also a largely one-time experience, so for people that look to value for money with their game purchase, this is a serious issue.