What madness is this? Borderlands 2 is barely a month out on store shelves and in that short amount of time, we’ve gotten an extra character class and now some full on downloadable content. And it’s not just your typical “new weapons and costumes” DLC either, this is Borderlands DLC, which means that for the price you’re paying (About $7.50 for those with a season pass, $9.99 for those without) you get a lengthy, entertaining expansion with play length rivalling full blown $60 retail releases. How the hell Gearbox expects to make money by providing so much entertainment for so little cash is beyond me. But even if Gearbox’s accountants are the big losers here, we as gamers get a big win.

Continuing with the massive hints that Pandora once housed vast seas during its colonization period which are now gone, Vault Hunters come to Oasis, a massive ocean of sand that still holds human and Pandoran remnants of a time when the seas prospered. It’s here that Captain Scarlett, in her massive floating sand barge, struggles vainly to locate a great and secret treasure. Of course, once Vault Hunters show up, all things are possible and the game is on. 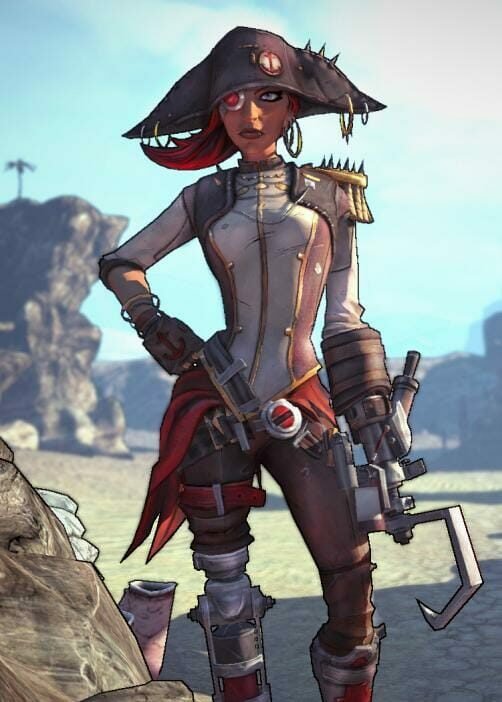 Anyone with previous experience with Gearbox’s past DLC knows what they’re getting into here. This is not a small dungeon, or even a mid-size dungeon that will take up a couple of hours of your time. Depending on how meticulous you are with side-quests and optional bosses, Captain Scarlett can take anywhere from six to eight hours to complete. Like past Gearbox efforts such as The Secret Armory of General Knoxx there is no skimping on production values here. Captain Scarlett comes with full new voice work, completely new environments, new vehicles, new enemies, and of course, new insane optional bosses for those looking for a tough challenge and a chance at some rare loot. The quests and characters all use the now signature irreverent Gearbox humor and the pop culture references come fast and furious, from a deranged Hunter S. Thompson to a nod to a famous game character from another 2K franchise. Nothing is sacred to the Gearbox writers, and the rapid fire nature of the jokes shows that their sense of humor is not only vicious, it’s got its finger on the pulse of today’s trends and obsessions.

Captain Scarlett even takes the time to introduce a new “currency” to the game to replace the Eridium that players used in Borderlands 2 to upgrade their characters. Seraph crystals are only obtainable after the main story has been completed, and it’s highly advisable you be a hardcore player that is also a glutton for punishment if you’re going to attempt to get these crystals. They’re difficult to obtain, but they can be used to purchase some of the most powerful loot in the entire game, so if you’re the sort of person that feels like a game isn’t complete until the very best loot is yours, prepare yourself for the challenge of attempting to farm these crystals.

All in all for owners of Borderlands 2 who enjoyed the game, this is a definite buy. If you got the season pass, you can rest assured that this—at least initially—justifies your purchase. If you didn’t get the season pass because you wanted to handpick only the good DLC that might come out, this is one of those good ones you were waiting for. The Mechromancer character class might be debateable since it’s priced at $9.99 and your mileage may vary on whether you find the skillset attractive enough to use, but from a pure entertainment value perspective, Captain Scarlett and Her Pirate’s Booty delivers more of the same shooting, humorous gameplay that fans of the main game enjoyed. The only real gripe with the DLC is that like the main game, some of the sidequests fall into “shopping list” of killing and/or collecting things, but if you haven’t hit the current level 50 cap, even this is productive since it’s getting you XP.

All in all for owners of Borderlands 2 who enjoyed the game, this is a definite buy.
REVIEW SCORE
9
File Under: Borderlands, DLC, PlayStation