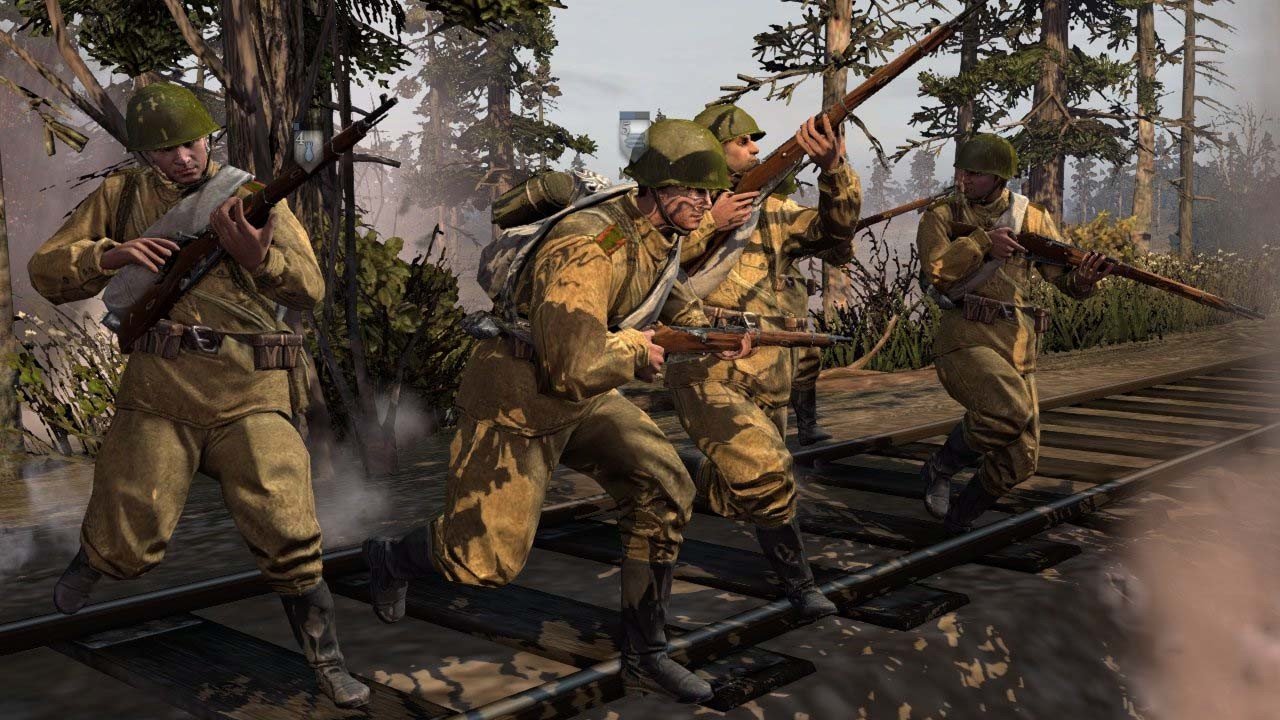 The horrors of the Second World War, especially the human cost of the battles that took place on its Eastern Front, should be in the forefront of the mind when considering Company of Heroes 2. The worldwide conflict took an enormous toll on the populations of nearly every nation involved. Especially stomach-churning was the sheer brutality of the fighting between the Allied and Axis forces in the East, even when rendered as raw statistics. More than 10 million Soviets and over 4 million Germans died in just under four years of combat. These numbers, staggering as they are, discount thousands of casualties from other countries.

Setting a videogame with this historical backdrop seems like a worrying proposition, but this is what Relic Entertainment does with Company of Heroes 2.

The game’s story is presented through a framing narrative that sees Lev Abramovich Isakovich, a veteran Soviet lieutenant, recounting his part in the Second World War to an interrogating officer from within a Siberian gulag cell. Through Isakovich the player is taken on a tour of key battles between German and Russian forces from 1941 to 1945. Each of the real-time strategy missions are bookended by computer animated cutscenes that show Isakovich struggling with the drastic measures taken by the Red Army during its defence of Russia and capture of Berlin.

The game fails to instil the historic facts it portrays with anything close to the necessary level of gravity, though. One mission that sees the player controlling a group of Polish Armia Krajowa partisans ends with their being executed by Soviet soldiers after completing their mission. Another shows Red Army commanders executing German soldiers who have already surrendered. Events like these — ones that demonstrates the ugliness of Stalin’s USSR — are offered up as context to WWII’s Eastern Front then pushed aside in favour of bog-standard strategy gameplay. This becomes disconcerting when, just after being reminded of how monstrous the Second World War was, Company of Heroes 2 asks players to get enjoyment out of reliving its battles.

If players are able to push this type of disconnect from their minds, they’ll find that the gameplay itself in Company of Heroes 2 is actually very good. The foundation of the game will be familiar to anyone who has spent time with real-time strategy greats like Starcraft, Warcraft or the original Company of Heroes and its expansions. Single and multiplayer missions involve amassing armies made up of diverse unit types, safeguarding bases and attacking enemy positions. Possessing control points helps contribute to the amount of resources (like fuel and munitions) being generated by one side of the conflict. A steady stream of these supplies allows for unit recruiting, upgrading and calling in support skills such as air strikes and bombing runs.

Company of Heroes 2 keeps itself from being generic by being laden with small details. Flavour text, drawn from historic facts regarding the WWII-era Red Army, fills every nook and cranny of the game, making the bits of written information displayed during multiplayer troop customization and within unit descriptions worthy of attention. This level of attention to detail helps Company of Heroes 2 stand out from its predecessor mechanically as well. While much of the game feels very similar to Relic’s first foray into WWII strategy, the introduction of new features does help.

Despite the large separation between disturbing history and emotionless gameplay that characterizes most of Company of Heroes 2, a few elements of the real Eastern Front have been turned into strategy mechanics. The most prevalent of these is taken from Stalin’s infamous Order 227 — a short-lived decree that included orders to enlist battalions of Soviet “criminals” to fight on deadly front lines and forced special detachments to shoot friendly soldiers fleeing the battlefield. In the game, Order 227 allows players to call in free, lightly-trained conscripts to act as cannon fodder unless upgraded or kitted out with equipment. Once these troops have been ordered in a countdown timer starts. If a retreat is attempted before the timer has run out, the Commissars stationed at the player’s headquarters will execute soldiers attempting a “cowardly retreat.”

The harsh Eastern European winters that played such a large role in the Red Army’s ultimate victory also has unique gameplay consequences. In one campaign mission units will freeze to death unless they shelter indoors or around a bonfire. More interestingly, battlefields will sometimes feature frozen rivers that separate control points. Savvy players can bombard enemies attempting to cross the ice and sink them. This, as trivial as it may seem, ends up being the most interesting strategic factor since it can stop powerful tanks or waves of deadly troops from getting to their target. Cutting off hostile units using the environment itself makes for a great wild card to add on top of the usual considerations of managing a real-time battle.

Relic accompanies a robust single-player campaign with multiplayer, co-op and skirmish modes. Playing against other humans, whether in an intimate one on one facedown or sprawling four vs. four battle, is easily the biggest draw. The unique Eastern Front features added to Company of Heroes 2 only help to bolster the already deep mechanics, providing an enormous level of complexity for competitive players to master. The Theatre of War mode with its variety of solo, co-op and bot matches is well worth spending time with as well. Challenge maps with restricted unit types, resources and win conditions make it necessary to develop new strategies on the fly, illustrating aspects of the game that may otherwise have gone unnoticed by someone who sticks to the campaign or competitive matches. All of these modes are coupled with a labyrinthine army customizer and progressive unlocking system. Though the single-player is fun enough, the game really shines when brought online.

The fact that the core features still hold up so well helps alleviate the fact that so much of the gameplay experience has only been slightly altered from what was already on offer through the first Company of Heroes. It would have been nice to see Relic making more extensive changes to the series’ formula, attempting the kind of large-scale innovation that made the first game such an impressive shot in the arm for the stagnating field of real-time strategy. A few good new ideas and an enormous amount of content go some way toward making up for this, but won’t do much to win over those who are uninterested in playing an impressive yet unadventurous entry to the genre. Company of Heroes 2 basically feels a bit like an enormous expansion to the first game. Depending on your perspective this might not be a bad thing.

What may be the real deciding factor is whether or not spending hours within the darkness of the Eastern Front setting is something a potential player feels like doing. This is a war game that very strongly evokes the awful history of the time and place in which it’s set. Because this is evident in every mode of play, from the weak narrative of the single-player campaign through to the excellent mechanics of the multiplayer and Theatre of War components, Company of Heroes 2‘s subject matter may seem too grim to spend significant time exploring.

Because this is evident in every mode of play, from the weak narrative of the single-player campaign through to the excellent mechanics of the multiplayer and Theatre of War components, Company of Heroes 2's subject matter may seem too grim to spend significant time exploring. 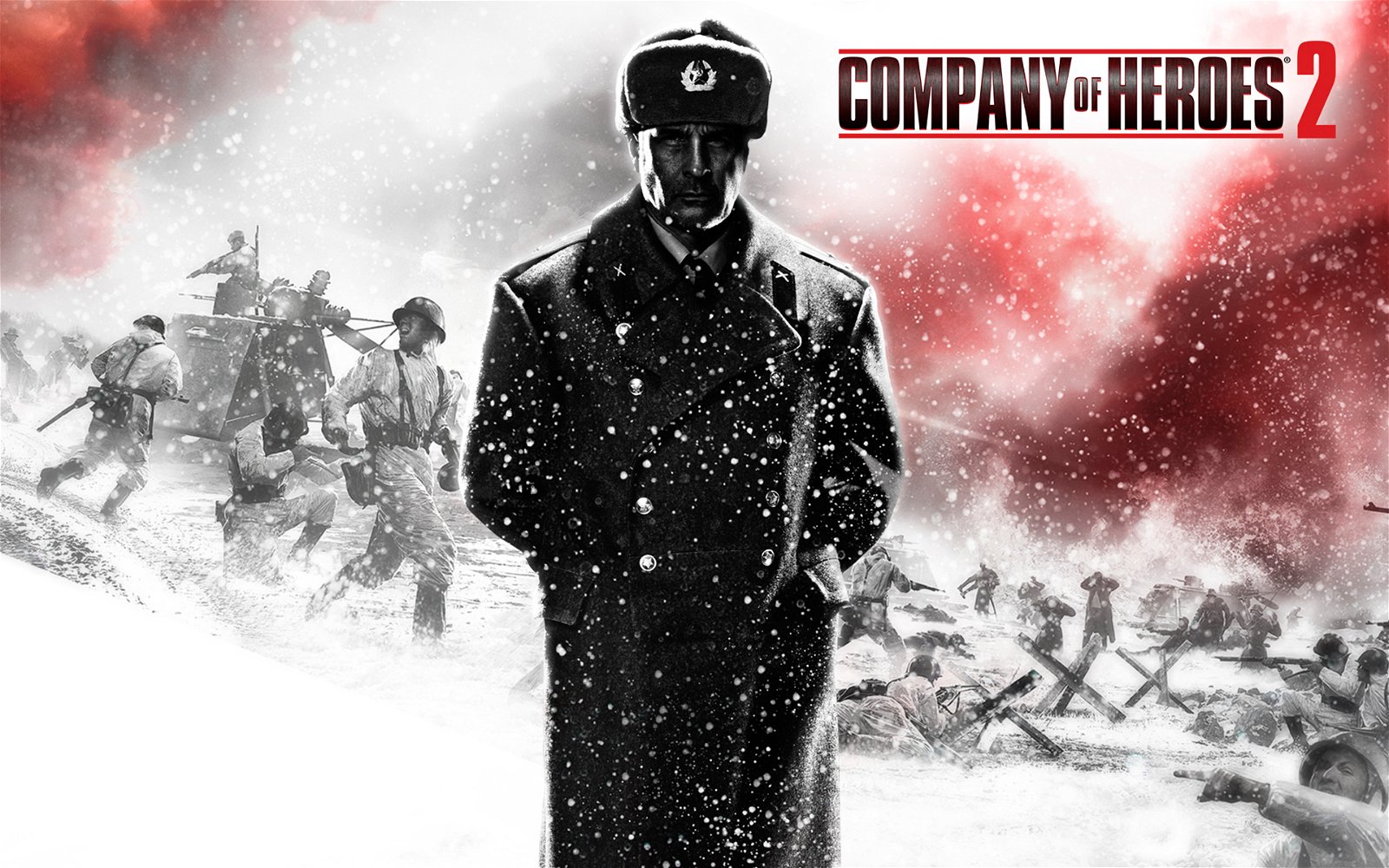