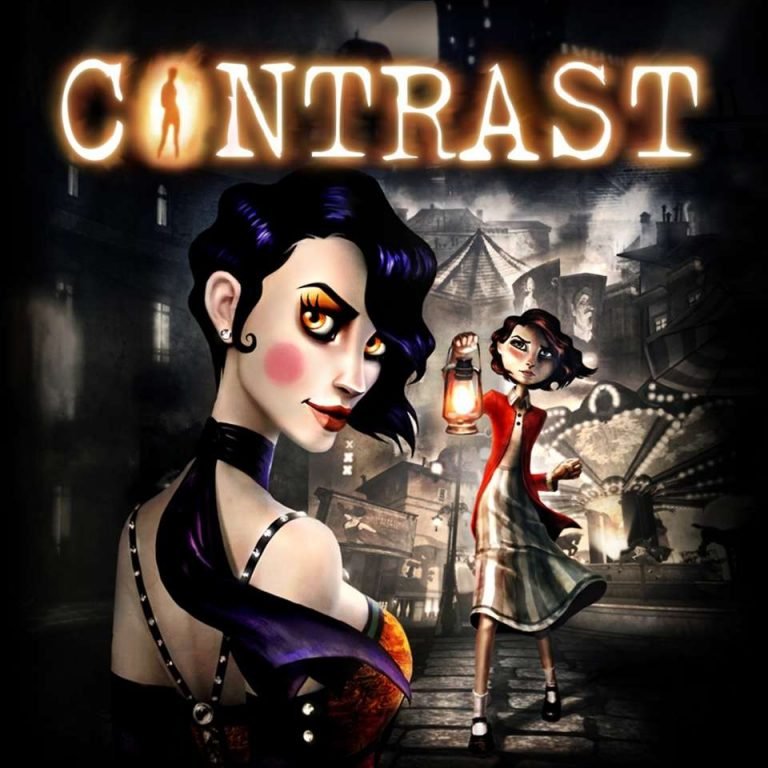 The Light & Dark Of Family

Contrast is, in more ways than actually intended, a sad game. It’s not just a game that tackles dysfunctional families and the effect they have on the psyche of children, it’s also a game with great ambition that is ultimately let down by a lack of technical ability on the part of its developer, Compulsion Games. There are many good ideas here in this game, but the elegance of the concepts on show is regularly let down by the execution.

The story of Contrast is quite unique. In some nameless city set in an era that is likely the height of the jazz period in the late 20s and early 30s, a young girl, Didi is trying to save her family from domestic implosion. Her mother is a cabaret singer, her father is a dreamer constantly lying and getting into trouble, and her imaginary friend is a tall, statuesque woman named Dawn that can turn herself into a shadow and interact with other shadows projected onto walls and other surfaces. From this seemingly random combination comes a puzzle platformer that repeatedly threatens to become something great, before hamstringing the achievement with some problem that kills all its momentum.

Compulsion Games went to the trouble of hiring a screenwriter—Alex Epstein—to craft the story for Contrast. That was a good move on their part as there’s an emotional authenticity to the dialog and situations the player encounters as Didi tries to save her parents’ marriage. The sultry lounge singer with a broken life and the desperate schemer that cuts a deal with the wrong people create an engaging plot with some painfully honest moments character weakness for everyone involved. Where the story fails—and I don’t know who’s at fault here, Epstein, Compulsion or perhaps the Canadian Media Fund since they were involved—is the disappointing “all’s well that ends well” ending that doesn’t ring as true as everything that came before it. It’s almost as if someone making decisions here became concerned about the touching but bleak relationships involved here and insisted that no one wanted a game that ended on a “downer.” The result is an ending that doesn’t feel earned or true.

However, the biggest culprit to the game’s missed attempt at greatness are the controls. This is a platformer, but camera controls are a throwback to the 90s 3D games, which makes a clear, reliable view uncertain at times. Dawn, the character that players control, also handles quite badly during any 3D segments. When she’s in “shadow mode” and the game is a classic 2D platformer, she handles fine. But during any of the more elaborate puzzles that involve negotiating an environment in 3D, the combination of poor camera and character controls turns the acrobat/shadow jumper into a plodding boat. This is also matched by her stiff, mechanical animation, which doesn’t feel appropriate to an agile acrobat. There are also geometry issues where if Dawn moves too close to objects she can get trapped with the only way out being to repeatedly hit the “dash” button hoping that will finally bust her loose.

Despite these problems, the actual shadow-based puzzle gameplay is genuinely charming. There are a lot of good ideas here, and the short duration of the game—between four and six hours—means that it never feels repetitive. There’s a nice combination of puzzles with plot and exposition so that even the simple act of negotiating a simple level to get higher can reveal something about the nature of the characters when it happens. This is a mixed bag when it comes to mechanics, as sometimes the simpler 2D platforming will feel like the game is working “as intended,” and can be fluid and simple, allowing the player to sit back and enjoy the ride. Other times, the 3D puzzle solving can hold everything back in a dramatic way, nearly killing the interesting narrative that unspools as the levels progress.

This is a game that could have been an indie classic, but the lack of polish—and conviction—kept it from really shining the way it could have. An interesting experience if you’re playing for free, but a bit too rough around the edges to easily recommend even at $15. This is a game that could have benefited from a few more months of tweaking to get its mechanics up to the level of quality as its narrative and core design concepts.

The story of Contrast is quite unique. In some nameless city set in an era that is likely the height of the jazz period in the late 20s and early 30s, a young girl, Didi is trying to save her family from domestic implosion.
REVIEW SCORE
6
File Under: