Precarious Platforming and Pitfalls at 2160p 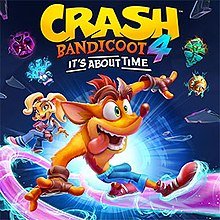 The ’90s were a fast-moving time for the videogame industry, particularly regarding the arrival of early 3D graphics, which brought with it the birth (and death) of several 3D mascots, including, of course, Naughty Dog’s Crash Bandicoot, who made his debut back on the original PlayStation.

Like his contemporaries, everyone’s favourite Bandicoot unfortunately stumbled and even crashed a few times over the years, as he left his first home and found varying levels of success after going multiplatform. Thankfully, since then, Crash has once again emerged, like a phoenix, reclaiming his balance as a king within the platforming genre, thanks to titles such as 2017’s N. Sane Trilogy and the more recent It’s About Time follow-up game.

For the uninitiated or for those like me, who hasn’t played a Crash game in a long time, Crash 4 feels wholly cut from the same pair of jeans found in the original trilogy and remakes, respectively. Levels are broken up into worlds, with a healthy mix of linear and more open-ended stages that expertly use fixed camera angles with an emphasis on pin-point platforming.

New additions to spice up the formula include several playable characters which augment gameplay enough to feel unique while still sticking to the core platforming found in a typical Crash-centric stage. The vast majority of levels, however, will have players jumping, bashing and ducking through hazardous traps and precarious steps as the titular Crash Bandicoot himself, augmented with mask abilities that spice up his regular spin attacks while taking advantage of specific stage gimmicks centred around said abilities.

The PlayStation 5 version of Crash Bandicoot 4: It’s About Time offers minor but welcome upgrades over its 2019 PlayStation 4 release, including shorter loading times (around 10 seconds at most), 4k output and a rock-solid 60fps presentation. Additionally, Activity Cards and use of the Dualsense’s adaptive triggers and the PlayStation 5’s 3D audio fill out the package, making it the definitive way to experience the game on a Playstation console.

Graphically, Crash 4 is stunning, particularly on the PlayStation 5, which seems to present the game in native 4k — however, the option to play at a lower resolution at 120hz would have been a great addition, particularly for a title that requires fast reaction times. The lack of HDR is also somewhat disappointing as Crash Bandicoot 4 is an incredibly colourful and cartoony game that looks great on an OLED display (or any other display for that matter).

In terms of difficulty Crash Bandicoot 4: It’s About Time can thoroughly be enjoyed casually and offers a depth of variety and interesting and fun levels that feel both familiar and new that will keep players engaged throughout their playthrough. Character and enemy designs are also fantastic, with my favourite being a pirate eel found midway through the game.

Unfortunately, completionists and trophy-hunters be aware, Crash 4‘ is absolutely brutal in terms of the requirements needed in completing each stage with a completion rate of 100%. Thankfully, aside from a bevvy of unlockable cosmetics and skins (remember those?), no actual gameplay is locked behind these formidable challenges, aside from very specific flashback courses that feel more akin to bonus gauntlets than stages, proper.

Ultimately, Crash Bandicoot 4: It’s About Time may not be the biggest upgrade over its last-generation release, but for a game that just came out a year prior, it does what it needs to do and presents the best console version of an already well-polished game for players to enjoy.

Crash Bandicoot 4: It's About Time may not be the biggest upgrade over its last-generation release, but for a game that just came out a year prior, it does what it needs to do and presents the best console version of an already well-polished game for players to enjoy.
REVIEW SCORE
8.5
File Under: