Crypt of the NecroDancer (PC) Review

This is a rhythm based rogue-like.

The concept didn’t quite grab me upon hearing it. Crypt of the Necrodancer has been in Early Access for quite some time, and I’ve seen thumbnails for YouTube playthroughs. While I tend to enjoy rogue-like games (randomly generated dungeons and frequent deaths seem to appeal to the ‘do same thing, expect different result’ portion of my brain), but mixing that with mechanics based around keeping rhythm seemed like it might be a bit too much.

Well, I’ve played it. I enjoy it. And the completed game seems to be rather special.
The aim of Crypt of the Necrodancer is to guide Cadence, a young adventurer exploring the aforementioned Crypt. Your exploration takes you through four zones, each composed of four randomly-generated levels filled with treasure, enemies, and traps, ending in a boss fight. The game’s primary feature, however, is built into the stage’s music – your character’s heart beats along to the song, controlling the timing of your actions and those of enemies. Timing your movements and actions to the beat of the song is the only way to actually move – just jamming on the button simply leaves you stuck in place, as enemies hop around you. The enemies also move when you do, following a wide variety of patterns, and while you can wait and stand still, this will remove your score multiplier and deny you extra gold from kills (and other bonuses tied to strength).

Traversing the dungeons in any Rogue-like is about strategy. You have to choose whether to skip encounters and rush through, or linger and search for more money and items to make yourself more powerful, risking the loss of health and a sudden death to improve your chances or just to pick up what you’ve lost. Having to do it while keeping beat to the stage’s music is harder, and actually more fun.

Saying ‘there’s a rhythm to it’ actually applies to this game. Everything is done with the keyboard’s directional pad. Enemy movements are to your beat, and predicting their movements while maintaining a movement pattern that avoids hits is critical for taking out a room with maximum reward and minimum risk. The enemy patterns play on this, some of them disrupting your movement or requiring certain approach vectors to work, such as a knight who leaps back and lunges at you, requiring you to dodge him to land a true strike. In a crowded room, this can wind up going spectacularly bad, with your character bouncing around and getting torn apart. You need to enter enemy proximity when they’re able to attack so you can avoid trading blows. The Mini-bosses often require being mindful of their attack directions and movement – the red dragon, for example, fires a horizontal beam of fire that can only be avoided by moving vertically, making attacks from the sides impractical and deadly.

The bosses themselves take this philosophy farther, and I was pleased with the fights. Most of them are also puns on music, which I appreciate, but their concepts tend to work quite well. For example, Deep Blues is an entire chessboard, where the pieces move as they would in chess, requiring you to keep this in mind to avoid being taken out by the queen (or queens, if the pawns make it to the other end). I had immense fun with the boss fights, even though losing sends you back to the first level of the zone, requiring you make the trek again. It also ensures they don’t get stale.
The right gear can also make a run go smoothly (or not), and I found the wide range of items to be welcome and complementary. Aside from your default dagger, there are weapons like the longsword that hit two squares in front of you, or whips that strike anything along a horizontal row in the direction you face. These weapons also modify movement, by extension – your weapon attacks will sometimes prevent moving without attacking, or even make certain enemies (like the above knight) far more difficult to kill. I love finding the right weapons and stat upgrades to deal with the situation at hand, or spells that can clear a room or disable tough foes. There seems to be a lot of thought into this element, which is one of the most important aspects of the rogue-like.

When I played this game, I found myself losing track of time. I would play a few rounds, and look up, realizing I’d played for hours and it was now four in the morning. The gameplay is engrossing, and seemed to avoid getting stale (though breaks to avoid frustrated screaming when you die for the twentieth time are recommended). There are several other characters as well, with unique mechanics, one of which I can’t get anywhere with because I am just too bad at the rhythm. It’s somewhat forgiving in most cases, allowing you to skip beats or press a little early or late.

The music is catchy, electronic beats that I don’t mind hearing repeatedly, important for a game based around the sound. The voice acting is a bit off to me, but it’s such a small part of the game I don’t particularly care. The stages even light up as your multiplier goes up, and the pixelated graphics have a detail to them that enhance the experience. In the end, the music, and the singing shopkeeper’s operatic tones, kept me going, enough to collect diamonds to buy permanent upgrades and unlock new items, or to try out the advanced tutorials (which are some of the most clever I’ve seen).

This game deserves attention. It’s a good addition to the rogue-like, and nobody else is going to get a chance to make rhythm-based games like this again. The bar’s set pretty high after this.

The aim of Crypt of the Necrodancer is to guide Cadence, a young adventurer exploring the aforementioned Crypt. 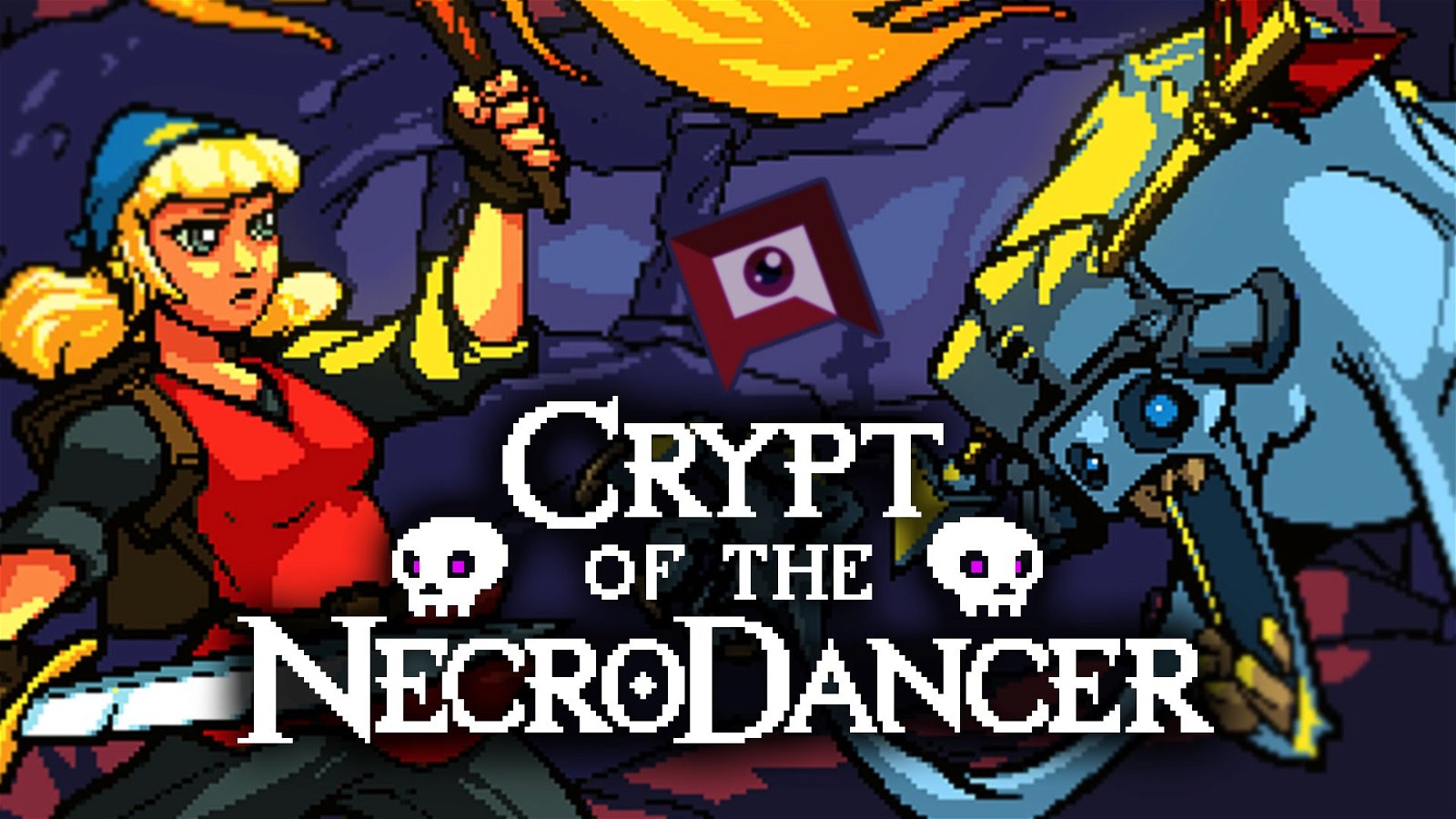