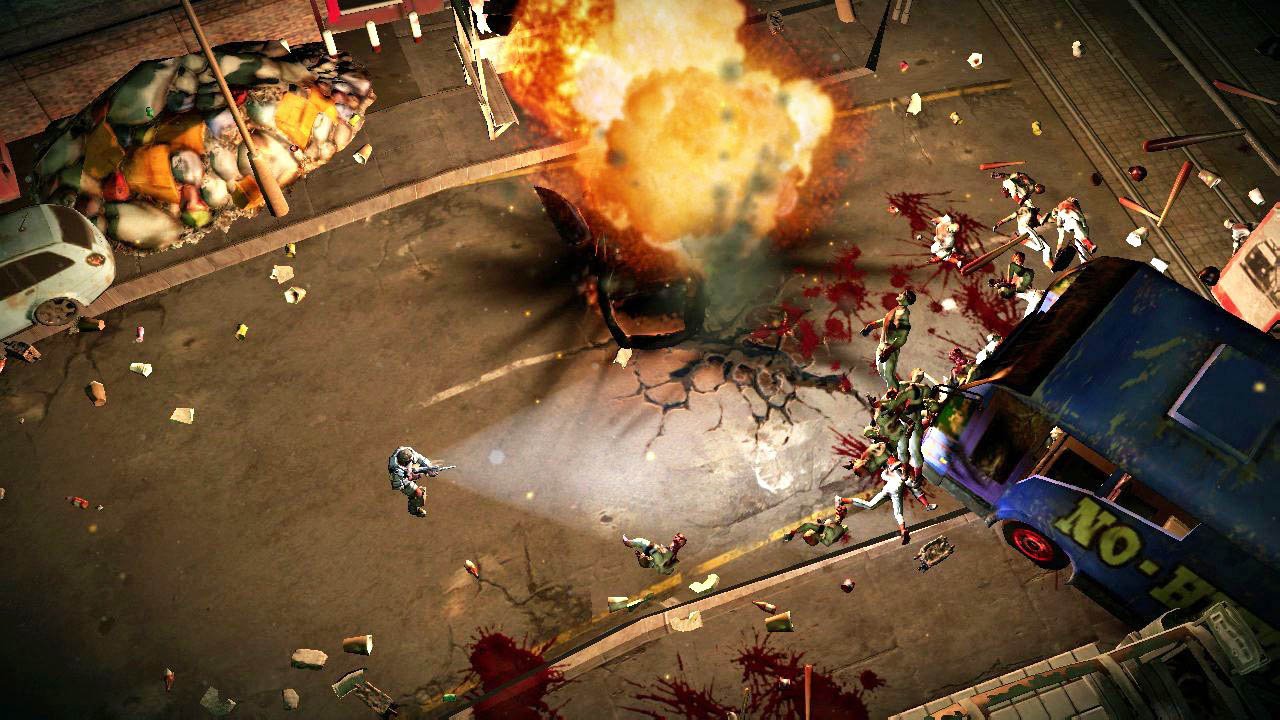 Zombies have entered the mainstream media in a large way in recent years. With shows such as The Walking Dead and books like World War Z, it is no wonder we are now seeing a large selection of games taking on the concept of zombies. The newest title to take on the mantle is Dead Nation from the folks at Housemarque, the studio known for Super Stardust HD. If anyone is capable of taking zombies and injecting them into the Duel-Joystick Shooter style gameplay it is these guys.  They do a great job save for a few choices that leave the title begging for an update.

The gameplay takes the hero (or heroes if playing in multiplayer) through ten levels filled with every manner of zombie you can think of. The decently low price of $15 buys you hours of gameplay, a minor story, and co-op that allows you to go though the game alone or with a friend. As you progress you are rewarded with money that can be spent on upgrades and weapons such as Shotgun, Flame Thrower etc.

The graphics do the job and give the concept of the desolation in the world you slog though, but with the camera pulled out from the action you may feel you are missing many of the details, along with zombies that feel repetitive after a while it seems like the game could have done with more work in the realm of graphics. The darkness of the game can also be an issue at times.  With constant waves of enemies rushing towards you, the lack of visual awareness of the surroundings can be a real problem. With most shooters being bright and vibrant (especially Super Stardust HD), the darkness of the world adds to the challenge and often adds a layer of frustration to the experience that is unnecessary.

Still, the controls are easy to understand, so the interface never feels overly complex. Once you get the hang of how the game plays, it is simply a matter of trying an area until you find the way to overcome the obstacles. Sometimes the solution to how to survive is much simpler then it may first appear, and it can be very rewarding to overcome a section by the skin of your teeth.

The guns in the game do feel a little underpowered for the task at hand. Also, the lack of a laser scope upgrade (only the starting rifle has a laser sight) means that many of the guns feel imprecise. The lack of an unlimited ammo upgrade also made the rifle seem the default choice for any given scenario. This is disappointing since many of the later guns pack much more punch, but run out far to quickly to deal with the sheer number of enemies you will face.

Story is lackluster at best – some small still-images and voice-over help set the tone for the game – but there is no dialogue or banter between co-op partners, and the feeling of urgency for the motivations of the characters is non-existent.  Games like Left 4 Dead helped deal with the zombie apocalypse yet also gave an idea of why things are happening, and banter with the characters allowed them to feel like people. In this game you are only a human gun, and your only real reason to play is to kill zombies.

Speaking of Left 4 Dead, if you played either of them many of the things seen in this game may feel familiar. The zombies have a very Left 4 Dead-feel and some seem almost taken right out of the Valve games. The boomer, Spitter and tank all make cameos in this title (or at very least their mirror likenesses do). This is not necessarily a bad thing, but it does take away from some of the concepts seen in this title. It has a feeling of been-there-done-that, yet this is by not fully the creators’ fault. The Left 4 Dead series has shaped how many people view zombie in games and with this fact we may be looking for the similarities.

The online play version is where the game really shines with a friend tagging along for the ride. Many of the struggles of the game seem far less difficult. One friend can fend off the initial swarm as the other gets their back to a wall and takes out another swarm. Due to some level design issues and the sheer number of enemies at one time, it can be very difficult to defend yourself when playing solo. There are very few places to put your back to a wall and deal with the oncoming threat. The online version at the time of publication does not feature voice-chat, although it is promised in a future update of the game.  The present omission is glaring in a title released in 2010.Dead Nation manages to retain much of the charm Housemarque have been known for but with the obvious issues listed here such as story, graphics, and lack of voice chat make it a less then perfect game. For the price, it will keep you killing zombies for hours, and if you are a PlayStation Plus member you can get the game for $13; there is more then enough to recommend for that price. With updates this game could be a “must-play”, but in its present state, it is merely a solid purchase for the zombie lover.

The newest title to take on the mantle is Dead Nation from the folks at Housemarque, the studio known for Super Stardust HD. 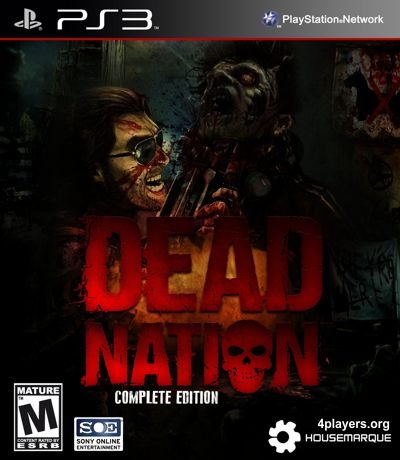