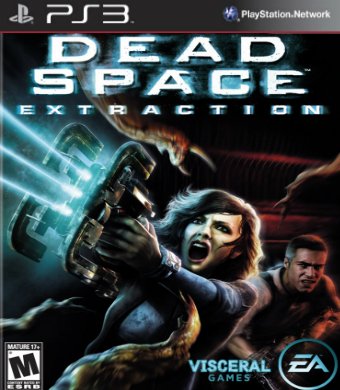 Dead Space: Extraction is a rail shooter that debuted for the Wii in 2009, and now that Sony has followed Nintendo into the realm of point-and-click motion control, it’s being rereleased for the PS3 and the Move. The game comes packaged with every PS3 copy of Dead Space 2, and as free giveaways go, Extraction is spectacular. The install includes a ten-state single-player/local co-op campaign, an arcade challenge mode, and full trophy support, so you’re essentially getting two quality games for the price of one, and both are well worth a few hours of your time.

For those that missed it the first time around, Extraction is a prequel set during the initial necromorph outbreak that takes place prior to the events of the original Dead Space. Extraction follows a small band of survivors as they attempt to escape the infestation, first on the planet Aegis VII and then aboard the Ishimura.

While the plot adds some depth to the Dead Space universe, it doesn’t offer much in the way of narrative excitement. Most of the characters are pulled straight from the book of cliché and you can tell which ones are good and which are evil simply by listening to the various tones of voice. The plot twists are eminently predictable, and it’s not surprising when the antagonist starts stabbing people in the back.

None of that is new, however, so let’s turn to the hardware. Extraction has survived the transition to the PS3, and the new version is a competent and faithful port of the original. Graphically, that’s not exactly a compliment. Even with the PS3’s additional processing power, Extraction looks like a Wii game, and while I can’t say I blame the developers – they are giving this away for free – it’s still a tad disappointing.

Fortunately, the mediocre visuals are easy to overlook because Dead Space: Extraction otherwise plays extraordinarily well. The Move sensor is extremely accurate and the game makes excellent use of the controller’s convenient array of buttons. You’ve got far more options than you do in the average rail shooter and the experience is deep enough to be worthy of the Dead Space label.

That’s true both with and without the supplementary Navigation controller. A two-handed configuration is ideal – the directional buttons on the Navigation controller make it easier to scroll through weapons – but that’s the only significant difference between the two schemes and the game is fully functional if you’ve only got the wand.

Extraction does fall into some of familiar stick-waggling motion control traps, although that’s hardly unique to the Move. Make sure that all of the necromorphs are dead before they get too close, and you won’t have to do too much wild flailing to fend them off.

Meanwhile, you can play Extraction with a standard wireless controller, but you will be at a disadvantage since the thumb stick can’t match the Move’s split-second response time. It’s serviceable if you’re looking to get through the story – the wireless controller has the best button layout and it will give you a steadier (yet less precise) aim – but it’s only recommend for lower difficulties or for Player 2.

Taking all of that into account, the PS3 version of Dead Space: Extraction is an upgrade over the original. It’s not worth buying twice and it doesn’t add anything new (there’s still no online support), but if you’ve got a choice, it’s probably the preferable option.

Beyond that, there’s not too much more to say about a rail shooter that’s already two years old. You point the cursor at whatever needs to die and you do so within the context of Dead Space. You have to target limbs instead of torsos and you use telekinesis to grab spare ammo, health, and collectibles. The camera moves around a lot and you’ll end up leaving a lot of power-ups behind, but you’ll generally have enough firepower to complete the level and your reflexes will improve by the time you make it to chapter ten.

Most of the other gameplay conventions are similarly imported from Dead Space. There’s a time slowing mechanic, the contents of your clip are displayed on your weapon, and you can’t see how much more ammo you’ve got in reserve. That lack of information can be a little aggravating in a rail shooter, but the splash of survival horror does up the tension when your plasma cutter clicks empty in the middle of a fight.

There are, however, some more serious technical concerns. I had to replay two levels because of glitches – in one instance, a closing cut scene refused to load, while in another, an enemy I needed to kill got stuck behind a wall with no line of sight – and while both felt like isolated incidents, there are no mid-mission save points and you have to clear one level in order to unlock the next. If something goes awry, you’ll have to redo 40 minutes of playtime, and that’s never a pleasant experience.

Thankfully, none of that seriously hurts the game because Extraction is already taking most of its cues from the arcade. It’s consequently been built for replay value and the profile structure is infinitely preferable to quarters. With ten different ten-wave arenas, the high-score driven Challenge Mode pushes that concept even further. There’s just something wholesome about dismembered necromorphs, and the ceaseless supply of monsters is not entirely unwelcome.

Taken on those terms, Dead Space: Extraction delivers everything that you could reasonably expect. It’s forgettable, but it’s enjoyable while you’re there and it’s fun to play with a friend, so it’s the sort of thing that’s perfect in 30-minute bursts while you’re looking to kill some time. You’ll want to play it for the back-story now that EA has announced that the first batch of Dead Space 2 DLC will feature two of the protagonists from Extraction, and given the cost, there’s really no reason to complain.

Dead Space: Extraction follows a small band of survivors as they attempt to escape the infestation, first on the planet Aegis VII and then aboard the Ishimura.
REVIEW SCORE
7
File Under: Action, DLC, Horror, PlayStation, Shooter