Game developer Cave is no stranger to shooters.  They’re most known for arcade 2D scrolling shoot ’em ups (commonly known as shmups), but not just any shooting games –Cave specializes in the “bullet hell” subgenre, the sorts of shooters where enemies eventually start to fill the screen with multicolored barrages of fire in intimidating patterns.  Their latest installment, DeathSmiles, offers Touhou-esque visuals (Touhou is a Japanese dōjin game series focused on bullet hell shooters made by the one-man developer Team Shanghai Alice), but with Cave’s trademark bullet insanity: a match made in heaven.

Instead of guiding a spaceship against swarms of UFOs and aliens, you guide one of many cute, magical girls tasked with fighting wave after wave of demonic forces. You’ll fly through several short but challenging levels (each with adjustable difficulty settings), facing off against a huge boss at the end of each. The stages are very intense from beginning to end – there is always something happening on screen, be it waves of bullets flying at you, enemies swarming in every direction or perilous obstacles impeding your shots and movement.  It’s an amazing thrill weaving through that impenetrable-looking blanket of deadly enemy fire and living to tell about it.

There are no powerups to speak of, unlike most shmups, but DeathSmiles still manages to offer enough variation in its gameplay. First consider how you shoot: one-button fires to your right, the other to your left. Enemies come from all sides, but the game helpfully warns you when enemies are about to arrive from behind you.  Tapping a fire button produces weak shots, but they also typically follow a pattern that makes it easy to hit multiple enemies. You can fire continuously by holding down one button, which narrows your weapon’s focus while increasing its power, but this slows you down.  In essence, these multidirectional shots add a level of flexibility to the controls making this game far more approachable than previous Cave releases.

DeathSmiles uses an infinite continue mechanic, so no matter how much you die, you can make it through the whole game.  For hardcore gamers, this will take much of the tension out of the challenge.  At the same time, using continues does whittle away that precious high score — and when it comes to bullet hell shmups, score is everything.

In addition, DeathSmiles offers numerous replay options. There are two additional modes — version 1.1 and Mega Black Label.  Each alters the game mechanics and scoring system, forcing you to devise new strategies and add great replay value to an already addicting game.  If that weren’t enough you can either play the game in the original, low-res arcade version, or use re-rendered art tailored for HD displays — sadly, not all of the art is redone, leaving some of the stages a blocky, pixilated mess. There’s also a 2-player co-op mode that includes the ability to play online with friends; however, like in many games of this competitive genre, 2-player mode isn’t really well suited to certain types of play.

All this enthusiasm leads us to the sad reality of the game’s release.  While there are many people devoted to the genre, not everyone will get the appeal.  Bullet hell shmups are a niche market, far more prevalent in Japan than in America.  It’s a shame seeing as how addictive these games can be, DeathSmiles being no different.  Even so, there’s still a devoted fan base (hence being published in America), and while shmups in general are dwindling the genre continues to live on long after the mainstream left it behind. While not typically the most accessible genre, DeathSmiles is a very welcoming title to those looking to dive into the thrills of bullet hell.

While not typically the most accessible genre, DeathSmiles is a very welcoming title to those looking to dive into the thrills of bullet hell. 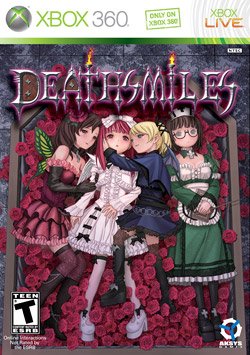