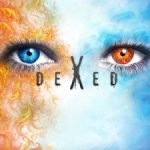 Another virtual reality title, another game that feels like a tech demo—only this time it is from Ninja Theory and costs $10. Yay? Dexed is a PlayStation VR on-rails shooter in the vein of Star Fox or Panzer Dragoon, where players will find themselves locking onto multiple enemies at a time before firing for maximum damage and score. Aiming can be done via physically looking around, or via tracking of the DualShock 4, which is what I preferred. Both are serviceable, but personally, I find aiming with my head to be a literal pain in the neck.

There are only two enemies in the entire game: demonic flying skulls and the final boss. The flying skulls can be fire or ice varieties and must be shot with the opposing type of bullets, as shooting them at with the same kind will impact your score and possibly your health.

Players are tasked with locking onto enemies with the correct bullets before shooting while coasting slowly through uninteresting levels that lack any real detail thanks to the limitations that VR puts on current hardware. There is no story to speak of across the handful of stages here (the game doesn’t even tell the player who or what they are), and there is a score based arcade mode that doesn’t do much to offer value other than having a catchy soundtrack. At least the final boss fight is fun, if not extremely easy (like the rest of the game).

Overall Dexed is just another pay-to-play VR tech demo with barely any meat on its bones. While the combat is reminiscent of some decent games, Dexed pales in comparison to them. If you’re looking for something so easy it is almost zenlike, then maybe Dexed might be worth it for you, there is even a zen mode though I don’t see the reason for it as it felt impossible to fail playing on normal mode. For me, though, Dexed is one of the most boring virtual reality experiences I’ve had which is ironic since everyone seems to bill the tech as the most exciting thing to happen to gaming in a long time.

Dexed is one of the most boring virtual reality experiences I've had.
REVIEW SCORE
6
File Under: HTC Vive, Ninja Theory, Oculus, PlayStation