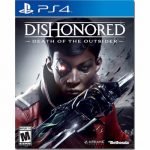 Dishonored: Death of the Outsider offers players some delightful playgrounds to ply their stealthy abilities—or simply use brute-force. Beautiful cities, banks filled with clockwork machines, and underground boxing arenas offer multiple routes for completion, allowing players to decide how to best deal with interference. Even better though is seeing these places come alive and gain meaning as players catch hints of scattered conversation, collect information, and read notes, each piece giving the environments and people within them a deeper context that makes the world more satisfying.

Dishonored: Death of the Outsider features some sprawling areas, taking place in clutches of city streets or large, complicated buildings. When in the streets, there are various ways to get around undetected using protagonist Billie’s warping abilities to snap to a different location on the pipes and awnings that line the thoroughfares. She can also hide in the various bushes, sewer pipes, and outcroppings that line the game’s twisting streets. The indoor areas tend to be more straightforward, only offering a route or two, but still feature a lot of places players can tuck themselves into. These layouts give players many hiding opportunities, letting them feel clever when they find a route past their foes.

Billie can also use a few abilities to better sneak around. One power lets her freeze time and leave her body, floating through the level. While disembodied, she can mark foes to keep an eye on them, better see items lying around, and get a feel for areas before stumbling into them. Players can also use her handy warping power to move around faster or reach high perches, or use her identity-stealing powers to knock someone out and take their form for a time. All of these drain her special meter, but it recharges quickly, encouraging players to play around with these abilities.

If sneaking isn’t much your thing, Billie comes with loads of weaponry in Dishonored: Death of the Outsider. Shots from her wrist launcher can stun or kill foes, and she can hurl explosive grenades and leave mines that will snatch a foe as they run by. Ammo is plentiful, so even if Billie gets assaulted by groups of guards, if she can funnel them carefully, she’s more than capable of killing them all with crafty attacks—which never gets old.

That might make it sound like aggressive play is perfectly viable, and for the first few stages, it seems to make the game a snap. Guards can be lured into chasing her into the various alleys and tight areas and then get torn to shreds by Billie’s weapons and supernatural powers. Later, though, clockwork soldiers and tougher foes are introduced that can be hard to kill, meaning brute force won’t turn the game into a cakewalk.

Dying to these foes does get frustrating, as the game features some long, long loading times. Unskilled players will find this a constant nuisance as they get used to the game, having to sit and wait due to missing a guard or stumbling into the wrong area. However, Death of the Outsider does feature a quick save feature, so at least those deaths won’t take the player back very far.

As playgrounds to commit murder or sneak about, Death of the Outsider’s locations are a delight, but like Dishonored 2, they’re also fun to look at. Shops and signs line the roads as people wander about, taking in street performers and chatting with one another. In the game’s buildings, various bits of machinery and business are lying around, each area feeling like it serves a purpose in a real place.

What adds to this is the general mission structure of most areas. Players are given a loose task, like rob the bank or find an important item, and then left to see how they will do that. Perhaps while stabbing people they’ll find a note that indicates a secret knock that will get them through a locked door. Maybe they’ll overhear someone say something in the streets that will lead them to pickpocket a certain person. The game’s clues hint that there is so much going on beneath the surface, with characters and places having actual relationships and connections to one another.

Side quests add deeper meaning to Dishonored: Death of the Outsider as well. Players can pick up odd jobs from a black market if they want a bit more to do, such as missions where they may have to steal a certain item without being seen, clobber a specific person, or kill a mime and make it look like a suicide. Each of these adds another welcome layer of challenge to the game in their own way, either by giving players another activity in guard-filled areas or by seeing how the player will manage to sneak an unconscious body all the way across town.

The only downside to these side missions is that they often lean more towards one play style over the other. Some of these require people to die, while others require stealth above all, and since they provide huge financial rewards that players can use to buy bonecharms (buffs) and items at the black market, it can get annoying trying to do them all for the money. Players who are more loyal to their play style will have to skip some of them and deal with the lost benefits from completing them, but they also force players to move out of their comfort zone if they want to reap all the rewards.

Dishonored: Death of the Outsider offers some robust locations that will keep players busy, offering a lot of enjoyment in seeing them come alive through overheard conversations and hidden information. They become realized locations as players choose their own path through them, creating their own route to the game’s ending. Whether quietly or in a shower of blood, Death of the Outsider offers a satisfying romp through a complex, living, deep world.

Whether quietly or in a shower of blood, Death of the Outsider offers a satisfying romp through a complex, living, deep world.
REVIEW SCORE
8
File Under: Arkane Studios, Bethesda, Dishonored