A Great Game, That Is Far From A Cash Grab 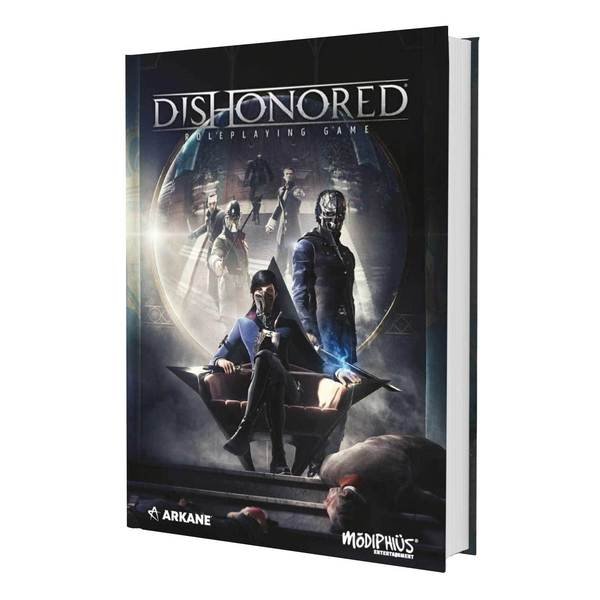 I love the Dishonored series, so when I had the chance to check out Dishonored: The Roleplaying Game with a few of my friends, I jumped on it. The story takes place in the Empire of the Isles, a place that players of the video game will know as a truly wretched place. It’s a world full of grime, sorrow, and rats. So many rats.  Both the setting and the time period, the Industrial Age, make for a very clever and fun tabletop RPG that I strongly recommend.

To get started playing Dishonored: The Roleplaying Game (not the most imaginative of names), all you will need is the Dishonored Corebook. It’s a beautiful hardcover book totalling 300 pages. It will give you all the rules and background you need to play the game, but I would encourage players to also check out the video game series if they haven’t already. One, because the series is best in class, and two, is that it will help flesh out the role-playing aspects.

My friends had not had the privilege of playing the games but quickly figured out the gist of it. This is the Victorian era that has been pushed to the creative extreme and is an alternate history of our own.

The book starts with an intro to the Empire of the Isles, so you and your players will have a better understanding of its history, people and struggles that they face. It also has a very simple to follow step-by-step guide to playing the role of the Protagonists. I opted for a rugged criminal while others could be assassins or stoic crown loyalists. There’s lots of info and storyhooks on additional antagonists that will give you everything you need to feel inspired and tell a wonderfully dark, twisted tale that feels authentic to the universe. Overall, this is a pretty simple game to pick up.

One of the things I most like about the Dishonored series is the strange nature of the Void, and the way it bends reality. It’s used very smartly in the Dishonored: The Roleplaying Game and allows players to stay on their toes, especially if the game master is feeling sneaky. Just like in the game, chaotic behaviour is all over the tabletop version. If players continue to act out of line, the game master receives his own resource of chaos, he can then use it to make it more difficult for players in the future. It resembles the chaos mechanic in the game, and it makes players think carefully about the decisions they are going to make.

“To get started playing Dishonored: The Roleplaying Game (not the most imaginative of names), all you will need is the Dishonored Corebook.”

There’s a mini campaign included in Dishonored: The Roleplaying Game that is told in four acts that is a great intro to the world called, “The Oil Trail” or you can do a streamlined narrative playthrough using the Modiphius 2d20 game system. I suggest the mini campaign to get started and make sure it’s to everyone’s interests.

I have to say I’m amazed at how faithful Dishonored: The Roleplaying Game is to the video game series I love so much. For fans of the series who can’t get enough of Dishonored you’ll find lots of extra info not previously mentioned in the video game that is worth the purchase alone. There’s plenty of info about the Kaldwin family and the city of Dunwall, but there’s also a ton of new info about the Empire you won’t find anywhere else.

Nothing feels shoehorned in here, and if you’re looking for a great tabletop game to play with friends, I’d highly recommend giving Dishonored: The Roleplaying Game a shot. It’s pretty straightforward, character creation shouldn’t take you more than 30 minutes and, despite being a dark and twisted setting, it’s a lot of fun. And hey, if you can’t get any friends together, it’s never too late to finally give the Dishonored series a playthrough in case you missed it the first time around.

Dishonored: The Roleplaying Game is an amazingly faithful rendition of the Dishonored video games, that you can play with your friends.
REVIEW SCORE
9
Buy On Amazon
File Under: Dishonored, RPG, Tabletop