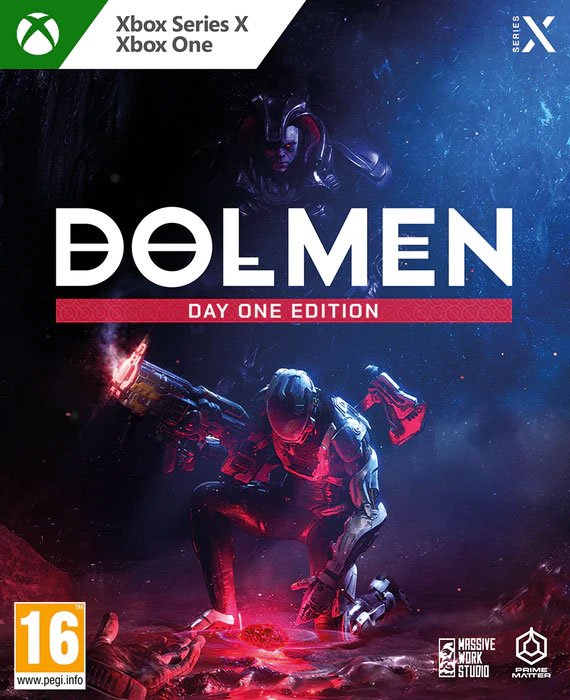 Many games have derived a progress loss system akin to FromSoftware’s Souls series, and Massive Work Studio’s debut console title, Dolmen, follows suit with the best of them. Dolmen is a cosmic horror, Sci-Fi adventure that borrows from the series that came before it but crafts its own identity amidst the three-act narrative of its story, a huge feat for a title that is difficult to describe without saying “it’s like Dark Souls.”

Dolmen inserts the player in the middle of a futuristic setting, where humans have travelled the far reaches of space to expand humanity across the universe. Of course, there are multiple dog-eat-dog based organizations that seek to advance their own interests in pursuit of power, knowledge, and military advantages. This is where the Zoan Corporation comes in, an entity that sends genetically modified superhuman types — called Drillers — to a planet called Revion Prime, where the entirety of Dolmen takes place.

The Zoan Corporation’s main objective is to retrieve Dolmen Crystals, powerful items that grant the ability to interact across dimensions, with the aim of advancing Zoan’s technology. After a horrific accident which leaves the planet in a dystopian-like state, the player’s character is recruited to locate and return the Dolmen Crystals to Zoan, while facing unimaginable Lovecraftian inspired horror creatures fully equipped with tentacle like appendages, many teeth, and none can be described as friendly.

Dolmen is hard and unforgiving. There are no difficulty sliders to help the player, and many sections that would normally require a small tutorial for the player to understand what they’re doing, are presented without them. As the player advances through the beginning of the game, which is ironically called ‘Main Path’, there are small circles that inform the player of the control scheme. Although B = Dodge roll, and RB = fast melee attack would make Elden Ring players feel right at home, there is an option to change the controls in the ‘System’ menu of the start screen, a good addition to help newcomers adapt to these types of titles.

“Dolmen is hard and unforgiving.”

The gameplay tutorial is well done. Massive Work Studio assumes the player can function without hand holding, and the beginning of the game does a good job of this, tossing the player into the fire with a ‘this is how you breathe, now live’ type approach. There are different types of weapons and armour the player can craft on their journey through Revion Prime, with one-handed axes and swords, two-handed swords and clubs, gauntlet weapons, shields, and even GUNS which utilize an energy gauge (like a magic meter) that can allow for different playstyles.

There is a good amount of freedom to build the main character as the player wishes. The game rewards the player for focusing on one—rather than all—of the three types of technology between Human, Revian and Driller, as their stat requirements are too steep for a player to be a jack of all trades, which kind of makes the player feel like ‘I messed up my build’ if an obstacle seems too hard to overcome. Aiming on the endurance stat allowed my character to utilize the Revian technology, allowing a life steal type melee, extending an olive branch of health in the harsh setting. These boons don’t break the game, they even the playing field. A worthy allowance against the tentacled menace.

Where Dolmen becomes its own title, is the introduction of elemental damage and ‘reactor’ like items that can be equipped and activated with the Y/Triangle button, making basic movements—like dodging—utilize the ‘energy gauge’ instead of the stamina bar. The success of combat relies on managing the player’s lifeblood—the Health, Stamina, and Energy gauges—while dispatching enemies. This focus allows the player to experiment with fire/ice/acid damage in search of enemy weaknesses.

“Dolmen rewards the player for focusing on one—rather than all—of the three types of technology between Human, Revian, and Driller, as their stat requirements are too steep for a player to be a jack of all trades…”

This is an awesome design, as the player gains more experience and knowledge of their adversaries, the enemies in turn become far more manageable. The title’s combat is cohesive and smart, while enemies—even the weakest ones—can annihilate the player at any point. By utilizing what was learned, I was able to go through areas I once struggled through with ease, but Revion Prime never rested on its laurels, focus is always necessary.

Placed throughout Revion Prime are beacons that act as respawn points when the player dies. To add insult to fatal injury, all experience points (called Nanites) are dropped along with Dolmen Fragments upon death, leaving behind a small fetal position ghost—very much like the green wisp in Dark Souls—that on the next attempt the player can grab and ‘restore the timeline’, allowing the player to retrieve their Nanites and Dolmen Fragments.

Dolmen Fragments have a unique feature, they allow a rematch on the massive bosses at terminals placed before the gargantuan encounters, gifting the player with much-needed Nanites and crafting materials to outfit the player with their fangs. These terminals also act as BOSS AHEAD signs in warning, which is a huge adrenaline rush on the first encounter, and multiplayer lobby zones. Dolmen’s multiplayer only allows Co-op during boss fights, which works admirably, but my brother and I found it disappointing. Conquering the entire Revion Prime surface with a friend would have been a great experience.

I had a few heavy gripes with Dolmen. There is a feature to choose ‘quality’ or ‘performance’ graphic options, and with a combat system that relies on precision, quality is basically unplayable on the Series X. The dip in frame rate, while small, is suicide. The menus are clumsy. Almost all functions on the menus use the directional buttons, which make accidental menu skips a certainty.

The game hub is a small two-floored hallway Zoan ship, that allows for character armour colour customization, levelling up, crafting, and that’s pretty much that. The level up part of the Zoan ship reminds me of a Super Metroid save point, which is cool, but going through loading screens to get to a bland, cramped area to use functions that could have been delegated to the beacon points feels moot and excessive. There are HUGE camera issues. The lock-on button for combat and the camera-centre button are delegated to pushing in the right stick, which is a common function, but due to the paltry lock-on range the function centres the camera unnecessarily. This makes the camera get stuck in doorways and walls, causing immediate death in precarious situations. The camera is the hardest boss in the game.

Dolmen is a love letter to the Souls series of games in difficulty, a well-thought-out combat system, a dynamic soundtrack that fits the setting, unique mechanics that are fun to learn, and an experience that leaves the player feeling truly accomplished when surpassing insurmountable odds. However, grappling with staple game mechanics such as the clumsy menu, the cramped hub Zoan ship, and the camera are notable frustrations that take away from the overall immersion and experience. With quality-of-life improvements, and more emphasis being placed on the narrative, Dolmen can be considered great, but it falls just short of that.

Dolmen is a massive achievement on a small Indie team of 30 developers and is a solid recommendation to those familiar with FromSoftware’s titles but shouldn’t be recommended to the more casual gamer.
REVIEW SCORE
7.5
File Under: Dolmen, Horror, Massive Work Studios, sci-fi, Souls-like