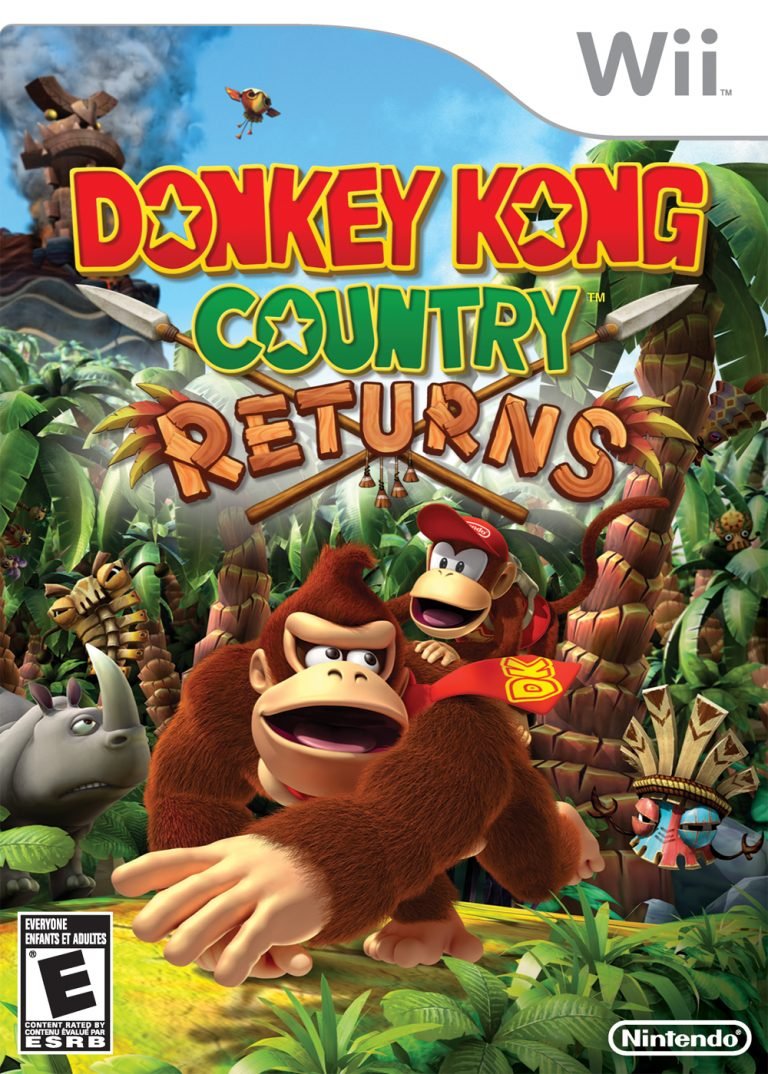 Donkey Kong Country is a title whose historical impact in the industry can’t be denied. Besides helping popularize the idea of pre-rendered 3D visuals in 2D games, the game also inspired the development of today’s “2.5D” games. Now, after years of odd cross-genre attempts with the Kong characters (with mixed results), it makes sense that Nintendo would want to rekindle Donkey Kong nostalgia in a pure side-scrolling action game. But with original DKC developers Rare now busy at Microsoft, can Metroid Prime producers Retro Studios make Kong a king again?  While Donkey Kong Country Returns is a strong affirmation, the game still has some irritating issues.

First off, the general formula of a solid side-scroller is intact, complete with themed worlds, demanding jumps and pattern-based, increasingly challenging boss battles. As usual there are also a multitude of hidden bonuses in each level ranging from bananas, coins, and KONG letters to valuable puzzle pieces.  Each can be found with a keen eye and a sense of exploration and experimentation. Unlike the original DKC games, bonus stages and items are rarely placed in arbitrary, out-of-the-way locales like random pits, careful players will see clues to help them find the hidden stuff. And if you’re ever really stuck on your treasure hunt, old man Cranky Kong will sell you the services of puzzle piece-finding Squawks the Parrot. The goodie-grab aspect is a lot of fun, and will keep perfectionists occupied for quite some time.

DKC Returns does an excellent job of keeping things interesting, even though you’re technically just moving to the right. It also plays with your expectations every few levels, switching things up so you never quite have a chance to get bored with the presentation.

Sadly, the platforming pleasure is often held back by DKC Returns’ biggest fumble: controls. You can play the game using the Wii Remote held sideways or a combination of the Wii Remote and Nunchuck attachments – no Gamecube or Classic Controller support here. The game assigns multiple actions to a “waggle” movement of either the main controller or the Nunchuck – pounding the ground, rolling, and blowing air are all accomplished by shaking the controller. It sounds novel in theory, but it’s downright infuriating in practice. Since several functions are assigned to the same motion, you will inevitably encounter situations where you meant to do one thing and do something else entirely – like rolling off a cliff to your death when you meant to ground-pound.

With these controls in mind, there rises another, equally strong sense of difficulty in gameplay.  However, it’s not in a fun, challenging, “one more time” kind of way, but in a frustrating, unclear and often misleading way that is unlike any prior Donkey Kong adventure.   This isn’t your typical retro game challenge, but rather a death-laden trial and error sections that break up the typical momentum familiar in past DKC titles.

There’s no one stage that really surpasses the next in difficulty since the main issue at hand isn’t difficulty per se, but rather a lack of communication.  There are several points in the game that never clearly illustrate what you can and can’t jump on, or which crumbling pillars you should bother standing on and so forth.  It’s as though Retro Studios was expecting players to know just what to do and when to do it, whether it be a specific jump in the mine cart stage or a specific battle tactic. DKC Returns’ cryptic and particular nature is frustrating to say the least and borderline unfair.

Cooperative mode – one player takes control of Donkey Kong and the other of Diddy – doesn’t really make this any easier either. Diddy has slightly different moves, including a jetpack and peanut popgun. He can play normally or ride around on Donkey’s back to offer the same extra powers as his single-player counterpart. Despite having the mode, DKC Returns isn’t the least bit cooperative and the 2-player option works more as a free-for-all for both players. In fact, the game is actually harder with two players (which is saying a lot; the game is hard enough in single-player mode). Forcing two characters to navigate the tricky obstacles can make things a lot more chaotic, to say the least.

Donkey Kong Country Returns is undeniable proof that Retro’s prowess isn’t limited to sci-fi first-person shooters. It may not be the most groundbreaking title on the market, and it is laden with various problems in its controls, difficulty and co-op, but DKC Returns is still a solid title dripping with care and detail. It’s bright and colourful, but not in a garish way, and some of the more surprising things in the art style lead to some of the most memorable levels I’ve ever seen.  DKC Returns is a step in the right direction in terms of graphics and set up, but it’s riddled with far too many unnecessary problems.  Memories of games never die; just don’t expect those nostalgic needs to be met.