From its selection of video filters—including fake scanlines—and its customizable health bars/ hearts setup to its D-Pad control of a cursor at level select and vintage NES “fake typewriter” sounds during story pieces, Creepy Castle is a shot through time straight to the heart of a 30-year-old who is suddenly four again, sitting on the carpet with his mom shouting at him for being too close to the TV. It may sound sappy, but I actually welled up at one point from the flood of nostalgia and happy childhood memories that came rushing back. If any of that appeals to you, well, I probably don’t need to sell you any more than I already have. If, however, you’re after a bit more info, may I present to you this wonderfully crafted review? *gestures forth*

The first thing I should probably mention is that Creepy Castle harkens back to an era closer to the Atari than the NES, but it borrows heavily from both. Also, if the idea of minigames as battle mechanics doesn’t jive with you, that could be a concern. That being said, there is a menu option to make the minigames much less challenging for players who are terrible with reactionary-based minigames (which I am) or for those still using an Xbox360 controller with its notoriously “worst D-pad in gaming history” (which I use).

The story itself has the player assuming the role of a moth—named Moth—and exploring a creepy castle henceforth referred to as The Creepy Castle. Along the way, players will encounter plenty of enemies and critters to punch in the face (no, really, the game’s tutorials come in the form of adorably-drawn manuals describing how to best punch a new type of enemy in the face), plenty of story bits describing the castle and its inhabitants, and the occasional dissenter against the castle’s master, Darking. At the risk of giving away too much, Moth discovers that not all is as it appears regarding Darking and his cronies. 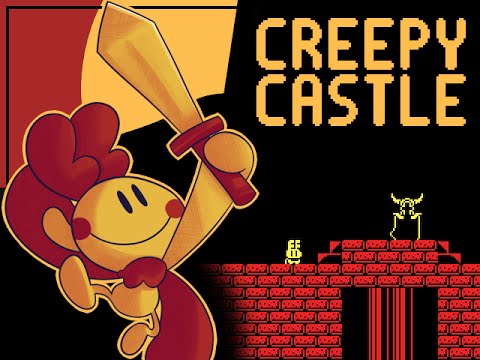 The art style is spot-on; featuring all the squee-inducing sprites that one can handle and which serve as the game’s primary link to the Atari generation. I’m also unsure as to whether it’s intentional or not, but Moth’s sprite doesn’t overlay when walking, instead carrying his black background around with him when he crosses in front of pillars or climbs ladders—a wonderful throwback to the games of yore. Likewise, the music is bang-on as well, with an absolutely killer soundtrack that I’d swear was hacked out of a NES cartridge. Similarly, the sound effects evoke memories of so many of my favourites, including the original TMNT, Might and Magic, Contra, and more.

That, I think, is Creepy Castle’s greatest success. It draws so much inspiration from the games that I grew up with without ever borrowing directly from any of them. The connection is real and immediate, but there’s no tangible link between this and any of the games from which it evokes memories; it is its own entity and it stands on its own merits as a game—like a game tucked away in a time capsule, only to be dug up after 30 years—like that ET game, only not buried for shame. Recently, I reviewed Syndrome and learned how poorly nostalgia-based experiences can go, but this? This is something special. Creepy Castle is the kind of game that I would have seen on Video & Arcade Top 10 and decided that I couldn’t live without. It’s the kind of game that would have come encased in a black or a gold cartridge, like Gauntlet, or Zelda—none of that grey nonsense here; you’d know this was a great game just by the unique profiling on the cart.

Moreover, Creepy Castle touches on some modern storytelling elements as well as poignant topics, both for gaming in specific, and for our time at large. To have received this game 30 years ago would have been wonderful—a glimpse into a future similar to The Jetsons, where everything flies and covered in chrome, yet remains the same white, oppressive America—but to receive it now is something truly magical. I’d love to elaborate on all the sappy reasons why I feel that way, but I fear that if I do, I’ll wake up in a “Forever Young” Diet Pepsi commercial. I may be older now, but thanks to my time with Creepy Castle, I was able to reconnect—if only briefly—with all the wonderful moments in my childhood that have led me to this very moment as a games journalist. That’s a magic that, as a lifelong player, I can’t put a price tag on.

Final Thoughts
If Undertale and Cave Story weren’t enough for you, Creepy Castle is the fix you need.
REVIEW SCORE
8.5
File Under: