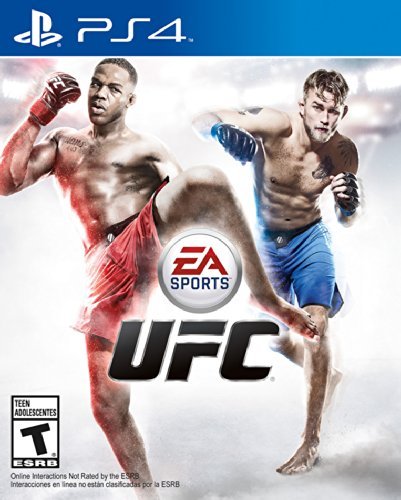 The first thing you’ll notice is that EA Sports UFC uses the same tile based menu system that all other EA Sports games and Windows 8 PCs use. I am guessing this is some strange mandate from the people at EA Sports who wear business suits; because at this point someone at EA Sports must realize that these menus are clunky and are in no way intuitive. I could be debated into agreeing that it’s nitpicking to point out how clunky the menu system is, however, the game as a whole is not very intuitive, so the menu system just becomes the that final mouse that broke the camel’s back. That said, once you’ve memorized the menu system you’ll find that EA Sports UFC has a career mode, a fight now option, online activities, FighterNet, and a challenges mode.

The good news is that while there are parts of the game that need a major overhaul, there are still parts of the game that are extremely impressive. The career mode is of especially high quality, and starts with you making your own fighter. This isn’t the sort of game where you’ll be given sliders to manipulate the spacing between your avatar’s eyes. As with McDonald’s, everything is chosen from a menu of pre-made options, and you might think that would lead to generic character designs; however, when you put all the options together you can still make a very convincing Santa Claus, Chris Hemsworth, or even a 1970’s bike cop complete with afro, dirty porn moustache, leathery skin and lots of body hair.

If you want to put in the time and effort, EA Sports UFC will even let you put your own face in the game by submitting a few profile images to one of their websites. Either way, once you create a character the objective is to become the champion of your weight division. You start as an unknown fighter trying out for the Ultimate Fighter reality TV show because the winner of that is given a UFC contract. Once you win you’re in the UFC and you fight and train to get into a title match. There will be a lot of training, and that will bore some. That said, my only career mode related issue is that the game’s “narrative” is told through videos that some fighters shot on their couches, or it’s Dana White talking to you but looking off camera. The way these videos were shot makes it seem like they were taped in offices between other more important business meetings. As a result, these videos make the whole effort seem half-assed, and now I wonder if anyone at the UFC HQ actually cares about this game.

“There a many things that EA Sports UFC gets right, but the top of that list is most certainly visuals.”

The fight now and online options are exactly what you think they are; bare-bone modes where you pick characters and fight people either on or offline. You can also fight the computer if you pick the game’s fight now mode. The FighterNet option is a tool that lets you track online progress, and that challenge mode is actually more like a practice mode. A warning to anyone who picks up this game, you will be practicing a lot. The main way to upgrade your career mode characters is to practice punching, kicking, and wrestling between fights. The better you perform in practice the more points you collect, and then you use these points to upgrade your character.

The challenge mode is made up of the exact same practice routines from the career mode, but it has been cut off from the rest of the game. That said, each time I booted up the game I would normally go to the challenge mode first in order to familiarize myself with the button combinations before actually going into matches, especially since many of your critical moves will require pressing three buttons simultaneously.

My other big issue is that the game rarely gives you any indication of what’s right or wrong. As someone who doesn’t follow the UFC at all, I have no idea why a specific person wins a fight anytime a winner was picked by the judges. If that wasn’t bad enough, both fighters in a match are given a wire outline of a man on their side of the screen and parts of that wire man will glow or flash red. I don’t know why it turns red, but since the flashing usually happens to the body parts that are taking the most punishment, I’m guessing that it’s some sort of damage indicator. What bugs me is that they start and stop glowing red faster than traffic lights, and there is no indication that the theoretical damage you’ve done to the other guy is permanent.

It’s not all bad. There a many things that EA Sports UFC gets right, but the top of that list is most certainly visuals. The team behind this game have caught every inch, and replicated the look and feel of actual UFC broadcasts. Each UFC fighter, referee, ring girl, and even Dana White has been replicated in extreme detail by using scanning technology, and the development team has also modelled famous arenas (like the Air Canada Center in Toronto). The result is one of the best looking PS4 and Xbox One games to date. EA Sports UFC also features a full body deformation system. This system will ripple and move your fighter’s flesh when that section of your avatar’s body has taken a big blow.

In the end, I had fun with EA Sports UFC, but I would warn all but the dedicated UFC fans away from this one. Clearly some prior UFC experience is needed to fully appreciate, or even understand, this game.