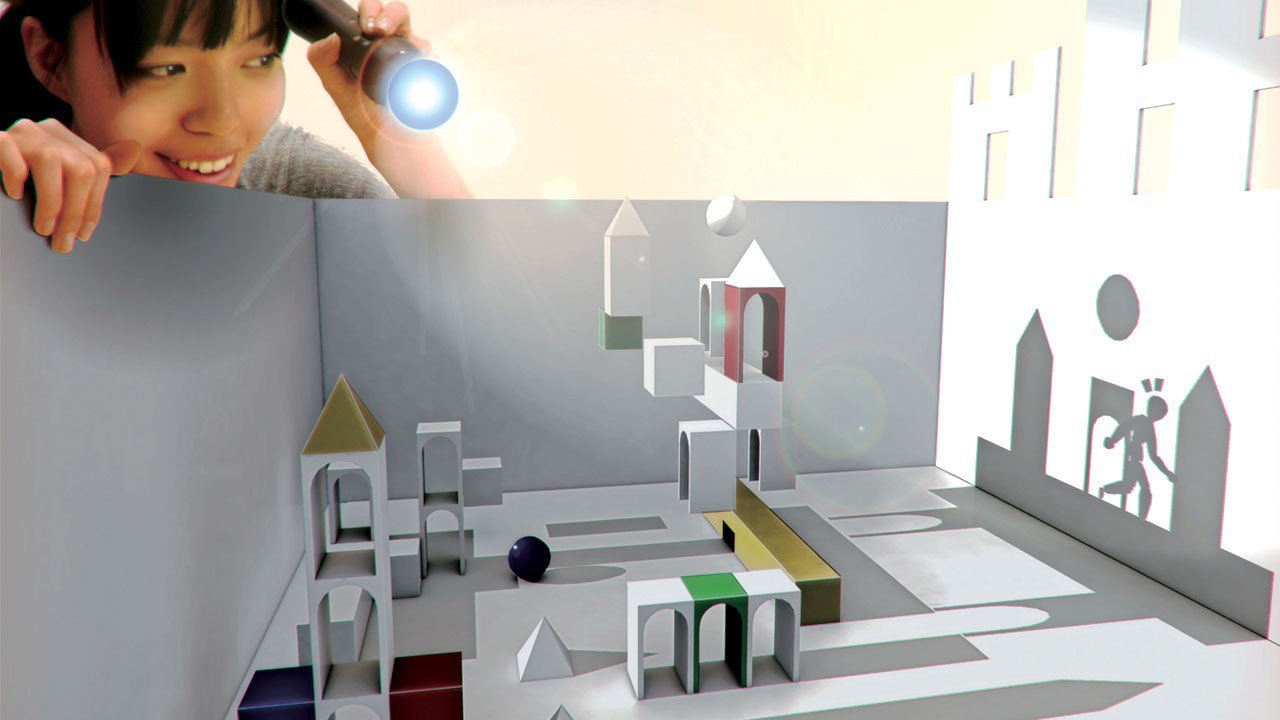 Like Lost in Shadow, Echochrome ii is a projection-based puzzle platformer in which you help a shadow figure navigate a shadow landscape, and while Echochrome is a much more literal realization of the concept, it’s generally uninspiring in a way that is both interesting and entirely forgettable.

In the PS3-exclusive, the Move controller operates as a flashlight that determines the shape of the environment. Every stage contains a cluster of disconnected blocks and you have to reposition the light source to bring the shadows together to form a path. There’s usually one optimal configuration, and there’s a satisfying sense of discovery when all of the disjointed shadows come together to form the image of a snake.

The core gameplay is built around the game’s Escort mode, in which you try to move a shadow character from point A to point B. You have no control over the character, so you have to manipulate the shadows in order to help him reach is goal. He’ll walk when the world stops moving and wait silently while you’re changing the light, and while you have to be careful not to crush him, the gameplay is otherwise highly competent and intuitive.

It’s also completely at odds with more conventional hero titles, and many players won’t have the patience needed for such a passive strategy game. Echochrome requires one minute of planning for every ten seconds of action, and even then there’s still nothing resembling a jump button.

If you are up for some mind games, Echochrome offers a decent amount of variety with dozens of separate maps and three different gameplay modes (Escort mode included). In Echo mode, you have to help the character reach predetermined points to collect echoes, while Paint mode is essentially graffiti. Walking over a shadow will splash the corresponding block with color, and your goal is to paint as much of the stage as possible.

There’s also a full level editor that allows you to make shadow art of your own, and much of the replay value will come from your own personal investment in those tools. If you’re not an artist, you probably won’t even bother, but the game does have full online support so you can at least check out the new stages that get uploaded by the community.

Yet even with all of those features, Echochrome ii – with it’s classical music and white backdrop – just isn’t particularly engaging. It’s the type of bland game that instills no strong feelings of any kind, and while it’s not bad, it’s not challenging enough to overcome that apathy. Most of the puzzles can still be solved with a bit of random guesswork, and the luster quickly wears off after little more than an hour.

Echochrome ii is essentially a glorified tech demo that lacks the immersive pull that would normally keep you coming back for more. It’s enough of a novelty to warrant a cursory glance, but I wouldn’t recommend buying it unless you feel a pressing need to experiment with the Move technology.

If you are up for some mind games, Echochrome 2 offers a decent amount of variety with dozens of separate maps and three different gameplay modes.