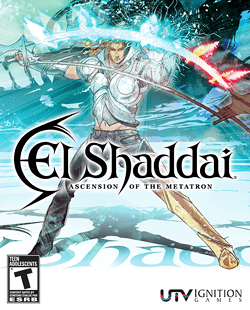 For those in the west, the idea of religion will commonly dredge up memories church going on Sunday, a lot of sober discussions about right and wrong, and the validity of faith in a secular world. Apparently the same concepts, when given to Okami Art Director Takeyasu Sawaki, it means humans favoured by God fighting in a combination of divine armour and stylish jeans while angels watch over them and take calls from God directly on their cellular phone. And that’s the part of the game that’s easy to grasp.

For those that aren’t familiar with Hebrew lore or apocryphal gospel, El Shaddai concerns itself with Enoch, a human that was brought up to Heaven in order to chronicle the progress of the universe.  Here, however, his writing duties are brought to an abrupt halt when a very stylish Lucifel gives him an assignment straight from God himself. A group of angels have rebelled against God, becoming involved in the development of humanity, and Enoch must recapture them to prevent an epic flood from laying waste to the Earth in order to eliminate the “contagion.” In other words, Enoch is the surgical strike to head off the more drastic scorched earth tactic that Heaven has in mind. In typical Japanese fashion, this is a deliberately disjointed narrative, with more implication than revelation, and tidbits of narrative text scattered about for more curious players to optionally search for within levels.

The crown jewel of the game is, without a doubt, the visuals. Sawaki is first and foremost an art director, and it shows in the beautiful, haunting, often abstract levels that comprise the game. El Shaddai is by no means a technically perfect game; it doesn’t push a lot of polygons, and even the framerate can take a slight dip from time to time. Where it excels is in allowing the imaginations of the artist to run wild. Free from the constraints of striving for photorealism, the levels are moving, interactive mood pieces that do what artists have always done best, ignoring the limitations of the tools at their disposal to create unique offerings based on their own creative uses of light, shape and colour. Every level of El Shaddai is a showcase of how games can be used to create startling environments that simply couldn’t be replicated anywhere else. In many ways, it’s a demonstration of how little many artists are doing in games because of the constant pursuit of photorealism. Where most games strive for that one look, El Shaddai throws one fantastical, artful environment after another. Sound is of a similar calibre, by first taking the smart route of offering the game both with English and Japanese voice acting. Both languages manage to hold their own in terms of delivery. The music on the other hand, is grandiose, orchestral, and has several strands of DNA from the score for the Evangelion series. “Epic” is an overused word in today’s landscape of language, but it suits the ambition of El Shaddai’s compositions.

El Shaddai manages to walk a delicate line between presenting something genuinely new while being a traditional action game, the likes of which haven’t really been seen or played in a non-indie, mainstream console title for years. A uniquely Japanese sensibility pervades every pore of the game, which is divided into two components, roughly 60% 3

person combat, and 40% side-scrolling platformer. The platforming is, in one sense, about as classic as it gets, requiring that Japanese blend of timing and occasional daring in order to cross gaps that appear to have no safe way across. It has one fatal flaw in that the 3D platforming sequences still fall victim to the problems of depth perception. All the platforming sequences of the game require precision, but where the 2D sequences let players easily slip into reflexes honed through years of Mario and Sonic games, the 3D sequences often make it extremely difficult for players to judge whether or not a gap is near or far enough to safely jump to.

The combat is simple—and yet not. Using only one button to attack, one to block and one to jump, the combat strikes a balance of simple button combos and timed button presses to provide a surprisingly large range of moves. The system is further complemented by how the availability of moves is dependent on which weapon Enoch steals from enemies to use against them. Grab a “Veil” and Enoch becomes a bruiser, able to block almost every attack and retaliate with slow, devastating punches that tear through armour. Grab the “Arch” and Enoch resembles Dante or Bayonetta, with fast, agile attacks largely based on stringing together deadly combos. Grab the final weapon, the “Gale” and Enoch becomes a long range attacker, firing off swarms of guided mini-missiles at his enemies but having almost no defence to speak of.

It’s a simple system of combat, but the tweaks Sawaki and his team have introduced to it give it a subtlety and range that reward practice and experimentation. There is also a unique way to avoid the dreaded “Game Over” fail-state in that when Enoch’s armour is chipped away and he finally sustains a fatal blow, the game gives players the option to frantically press every button used in gameplay. Do this fast enough and Enoch will revive with a full set of armour to continue the fight. However, should the fight go badly, with multiple deaths, the speed the game demands for reviving Enoch goes up until it gets so high that most players simply won’t be able to mash buttons fast enough.

This is the constant tension of El Shaddai: Ascension of the Metatron. It introduces new elements, while adhering to some very traditional Japanese design sensibilities. The end result is a game that does many new interesting things, while at the same time feeling slightly inaccessible to anyone that only got into gamin with the current generation of consoles. Old school gamers with more exposure to Japanese gaming will likely find the stiff challenge and precise, disciplined, demanding gameplay a surprising palette cleanser in today’s gaming climate. This is not a game bent on making players immediately feel dangerous and powerful, such as the chaotic Just Cause 2.

But perhaps most important of all, particularly in a period of gaming where almost nothing new is ever seen, El Shaddai manages—at least from the art direction angle—to do just that. The level design is elegant, and the mix of platforming and combat creates some stunning moments of exploration. This is a game that shows players things they genuinely have not seen anywhere else, except, perhaps in the more obscure realms of religion and anime. It’s not a game for everyone, with it’s stubborn adherence to older Japanese game design in some respects, but for those looking for something curious and new, it manages to provide a sufficient challenge and open the doors on the most imaginative art direction of the year. Is it worth the full retail price of $60? To those that buy games frequently and don’t need every gaming investment to be a blockbuster, “AAA” hit, yes, it is. For those that can’t buy games as frequently, particularly those averse to platforming, the game might be a better choice after a discount of $20 or more dollars.

It’s not a game for everyone, with it’s stubborn adherence to older Japanese game design in some respects, but for those looking for something curious and new, it manages to provide a sufficient challenge and open the doors on the most imaginative art direction of the year.
REVIEW SCORE
8
File Under: Action, Adventure, Japan, PlayStation, RPG