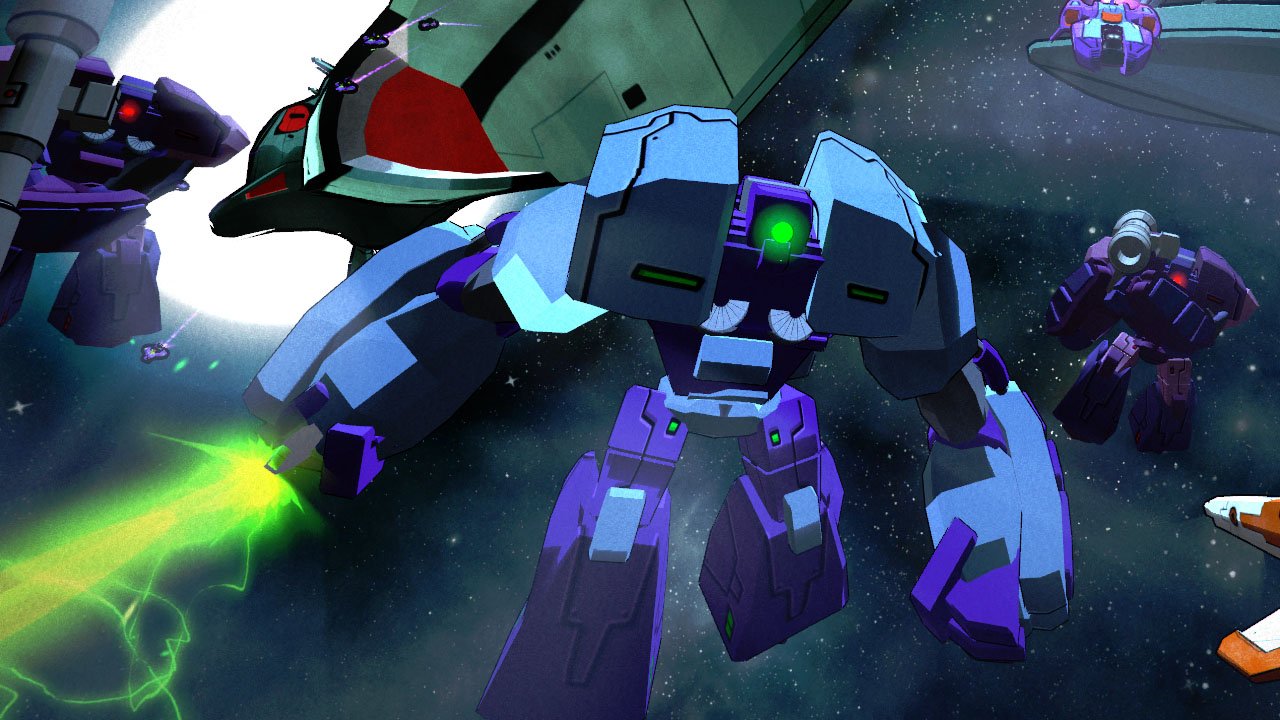 Galak-Z: The Dimensional, developed by indie studio 17-Bit, is an eccentric and aesthetically pleasing roguelike shooter. At first glance, it might just seem like a simple 2D arcade shooter replete with your usual array of space lasers and enemy vessels to blast, but once you play it a bit  more, you realize Galak-Z is full of depth and challenge. It demands that you invest the appropriate time and effort required to master the game’s mechanics in order to survive each of its five sizable episodes.

Right off the bat, the first thing I noticed about Galak-Z is its exquisite art direction. Heavily inspired by classic ‘90s Japanese anime and arcade games like Space Invaders, it’s one of the most original looking titles of the year. It sports cel-shaded graphics, crisp animations, 2D character models, a deluge of colours that add to the outer space setting, and giant mechs for you to control. The soundtrack is both harmonious and pleasingly bombastic, while the menus look like they were ripped out of off an arcade machine, complete with mono sound.
You play as a rookie fighter pilot named A-Tak who is sent into the far reaches of the galaxy to battle the nefarious and powerful Imperial army. After being shot up and stranded, and subsequently rescued, you’re tasked with working your way through five episodes of five levels each. To this end, A-Tak must salvage supplies, attempt to recuse other fighter pilots, destroy giant space bugs, and more. So much of Galak-Z is about exploring and discovering precious loot, thinking twice about your every move, and collecting Crash Coins—the game’s collectible currency. 17-Bit has created a layered system that will constantly kick your butt until you’ve finally got the hang of what Galak-Z is all about.

You can fire lasers, dodge attacks, strafe, and reverse thrust. Don’t charge into fights with your guns blazing but instead, pick out your battles against Imperial fleets and bugs accordingly depending on the enemy level—separated by color—as well as health and missile reserves. You can also upgrade your ship in a myriad of ways, including adding faster firing rates and additional shields. As mentioned, Galak-Z is a roguelike, meaning once you die you have to start an entire episode from the beginning with all of your supplies gone, and yes, this will happen often.

This is perhaps Galak-Z’s only flaw, but it’s a major one. Its difficulty and learning curves are very steep, and I can see plenty of people being put off within the first hour. It demands a lot of patience, tactical awareness, and strategy. 17-Bit could’ve done a better job of introducing what Galak-Z really demands of you, as well as easing you into its complete system in a friendlier way. Instead, you pretty much have to figure things out on your own through constant deaths. The button layout also adds to the frustration and slog, as dodging and firing missiles is particularly difficult—they’re strangely mapped to the Circle and Square Buttons. Good luck performing both moves at the same time.

Still, completing levels and episodes in Galak-Z is incredibly rewarding. In this regard, it’s reminiscent of the Souls series; brutal, but satisfying. It is an indie title that isn’t afraid to challenge you and suck you into its world. If you can ride out the learning curve, there’s plenty to enjoy in Galak-Z, and it could very well last you for 20 hours, but be prepared to endure a lot of frustration along the way.

17-Bit has created a layered system that will constantly kick your butt until you’ve finally got the hang of what Galak-Z is all about.