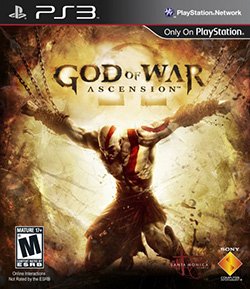 The tale of Kratos came to a pretty definitive conclusion with God of War III, but naturally, with a series this successful, it’s hard for Sony to walk away. As a result, we once more travel to the past of the god/family/everyone else killer to get a little more insight into what drives a man to such extremes. Mind you, we’ve already had two PSP games that did exactly the same thing, but those weren’t done by the “studio prime,” Sony Santa Monica itself. Those were pretty good, but not necessarily essential additions to the God of War franchise. Does the home team do any better? Actually, no.

With God of War III leaving no way forward, the obvious thing to do is go back, so we’ve got our first retail disc prequel with Ascension . The events here seem to take place shortly before the original God of War as Kratos attempts to leave behind his service to Aeries and is punished by the Furies for breaking an oath to a god. As with Chains of Olympus and Ghost of Sparta, Ascension can’t really do anything to change continuity and instead attempts to shed a little bit more emotional nuance on Kratos’ eventual quest for vengeance by revealing more of the circumstances that add fuel to his raging fire. There are some nice character moments for Kratos here, but ultimately the story doesn’t actually add anything significant to the mythos. Like the PSP games, this feels like a side-story; nice, but hardly as compelling or satisfying as his crusade against the Olympians.

When it comes to the audio, things are par for course with God of War: Ascension. That is to say, the usual high standards have been achieved with few surprises. As to be expected from a GOW game, this is a sub-woofer friendly title that will shake walls when the volume is cranked up as titanic monsters roar and buildings crumble. The music is still an evocative mix of hysterical orchestra with wailing chorus and more subdued tracks with classic Greek instrumentation, though ignorant players might erroneously think they are “ripping off Battlestar Galactica.” One unexpected surprise is the voice acting. Although T.C. Carson returns to voice Kratos, he actually gets to exercise his acting chops a little bit more in this instalment, doing far more than just shouting, “ATHENA! ZEUS! AERIES! YOU WILL PAY,” all the time. Some of the flashbacks call for a human side to Kratos that requires him to speak at normal volume and it’s a nice change to see Kratos acting in a fatherly manner and actually reinforcing that he had something worth losing.

A Return To The Last Generation

In some ways, the most surprising thing about God of War: Ascension is how much it feels like the original God of War. The series has always juggled a trio of gaming mechanics in the form of melee combat, some platforming/traversal, and puzzle solving. The ratio of these elements has changed somewhat over the years, with God of War III definitely erring far more on combat than either traversal or puzzles. This time around, the distribution is more even, with many more puzzles cropping up, and quite a lot of clambering about for Kratos to do in between fights. And while all this sounds good on paper, it never quite gels together as a cohesive whole. It’s not that Ascension is a bad game, far from it, in fact. But it never reaches the same heights of mind blowing “epic” that previous games achieved. Part of that is simply familiarity with the franchise and the other part—however unfair—is the prequel nature of the game removing any uncertainty from the proceedings about where this is all headed.

What does not feel padded out, surprisingly, is multiplayer. For the first time a God of War game has an online multiplayer component, and for the most part, it works. It looks like Sony Santa Monica was paying close attention to Playstation All-Stars Battle Royale, because despite the more serious, steroid enhanced Greek aesthetic, it’s still basically a multi-level, 3

person brawler with people using melee and special attacks against each other in team matches and free-for-alls. The slower, less antic combat of GOW translates extremely well to an online competitive arena, giving players a chance to read moves and counterattack, while not overly taxing the network requirements. Players also gain XP for kills and achieving certain milestones, which can then be spent on buying new skills and upgrading equipment. There’s even two-player co-op play in the tradition of Gears of War’s Horde mode, which can be played in single player as well for people that want to grind out XP to power up their characters. There’s longevity in this multiplayer, it’s well thought out and a lot of fun, though it remains to be seen whether a community stays and sustains it in the weeks after release.

All in all, God of War: Ascension is a “nice to have” game that scratches the itch for more God of War without doing anything to advance the series. It feels like a big budget version of the PSP games, even suffering from some of the same weaknesses as those titles like relying too much on repeating waves of combat. On the other hand, some of the set-piece action sequences—while not as jaw dropping thanks to familiarity—show an amazing mastery of the PS3 that can still impress. The multiplayer component is surprisingly fun, and might be another reason to keep the disc spinning in your machine. God of War fans can safely buy this and count on enjoying it, though perhaps not loving it. Others who have never played the series may be more awestruck with the action, though the increased frequency of puzzles may grate on less patient nerves. A fun, if uneven package.

Read Wayne’s full review of God of War: Ascension in the next issue of Comics & Gaming Magazine out next month!

When it comes to the audio, things are par for course with God of War: Ascension. That is to say, the usual high standards have been achieved with few surprises.
REVIEW SCORE
8
File Under: Action, God of War, PlayStation, Sony