The golf game I never knew I needed 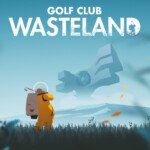 In typical sports video games, there is little to be offered in terms of story, short of creating your own player and going through a short snippet of your career. Golf Club Wasteland is anything but your typical sports game. This game is all story with some sporting elements as a framing device.

Golf Club Wasteland sees you controlling Charley, an inhabitant of Mars who returns to an apocalyptic Earth to play one last round of golf. Sounds poetic, right? Not quite. It seems that the rich fled from Earth to live on Mars and only visit to play golf. As a result, Earth has become an ill-kept wasteland (it’s right there in the title!) of crumbling buildings, abandoned apartment complexes and malls, graffito-tagged structures and other similarly maintained (or lack thereof) monuments.

Unlike almost every other sports game, this one is a side-scrolling adventure. Charley finds that the golf course he is playing is made up of the remains of the buildings and structures left behind by the population. There are no picturesque tree-lined fairways or quaint greens tucked behind a pond to be found here. This landscape is brutal and unforgiving, and the game is all the better for it.

As far as gameplay goes, it couldn’t be simpler: click on the ball and either drag the mouse (I played on PC) either left or right based on the direction you are playing in and the desired amount of power, then let go. Charley will hit the ball, and chase after it using his little jetpack (to be honest, I would LOVE to golf with a jetpack to get me around instead of walking). Most of the holes you play are essentially puzzles, requiring you to figure out how to get the ball in the hole at the end. I found myself hitting on to balconies, rooftops, through windows, etc., just to get to where I needed to be.

“Golf Club Wasteland was something I never knew I was missing in my gaming life.”

As the player, you are trying to piece together the story of how humanity fell through three narration devices. Charley, who tells his story through diary pages that you get for completing holes within a certain number of shots. There is a radio broadcast called Radio Nostalgia from Mars that furthers the story. Lastly, there is a narration from what is called a “secret spectator” who watches from a distance.

I really enjoyed listening to the Radio Nostalgia from Mars broadcast in this game. The radio station was made for the citizens of Mars, who are nostalgic for the familiarity of Earth and are listening to music from the 2020s. The radio host handles calls from listeners and shares gripes and grievances about living on Mars now. The radio show is largely irrelevant to the golf that Charley is playing and serves as the vehicle that drives the plot. The best part is, that it does it elegantly and fits seamlessly into the game. I imagined that Charley is wearing headphones that are playing the radio broadcast and it helped immerse me some more in the story.

There are three different “difficulty” settings for Golf Club Wasteland: casual, where you can focus on the story and the strange but somehow beautiful landscape; Challenge mode, which has you trying to get the ball in the hole within a certain number of shots to earn diary pages (a plot device I mentioned earlier); and Iron mode, where you can afford almost zero mistakes in your journey around the “course”. I played on Challenge mode for my playthrough and never really found myself in a position where I couldn’t complete a hole without getting all the diary pages. There were a few holes that required a few restarts to figure out the best pathway (because there is usually more than one), but nothing too strenuous.

There are 35 levels to play in Golf Club Wasteland and that feels like a good number to have. It doesn’t make it too long, becoming a chore, and isn’t too short where you are left wanting more. I don’t want to mislead here; this is a shorter game. I managed to complete all the levels in about 4 hours, collecting all the diary pages as well. If I were ambitious, I’d probably tackle Iron mode, but once through is enough for me.

By the end, I never felt like I’d had enough. I craved more of the story, which is really depressing when I think about it now. Thankfully, the developers included the Official Soundtrack, as well as the Graphic Novel Art Book to provide more story on Charley and the wasteland he’s whacking a ball around.

Golf Club Wasteland was something I never knew I was missing in my gaming life. I love golf and I love story-driven narrative games, so this was a match made in heaven. I could scarcely find a fault, save for some annoying game mechanics involving wind and not being able to see when my ball will land. If you want to kill an afternoon with an amazing narrative framed around some side scrolling golf, Golf Club Wasteland is exactly what you are looking for.

There’s no shortage of story in this golf adventure around a post-apocalyptic wasteland.
REVIEW SCORE
8.5
File Under: Game Review