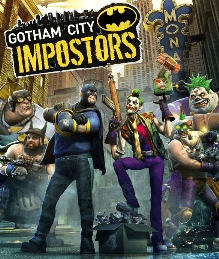 With Batman gone or otherwise out of commission, who will rise up to defend Gotham City from the forces of chaos? How about a ragtag group of wannabe bat men and women? These “heroes” are the only thing that stands between order and a city overrun by psychotic clowns. This is the set up for Gotham City Impostors, the latest FPS from Monolith Productions, a developer most recently known for their work on the F.E.A.R and Condemned franchises. Does the Batman license lend itself well to the FPS genre? Have the developers at Monolith provided a decent FPS experience at an affordable price? And will Gotham fall into chaos or become a shining beacon of order? Read on to find out.

Batman is typically a very serious guy who demands serious games about serious things. Chances are Batman himself would hate Gotham City Impostors (GCI) due to the fact that this game is the furthest thing from serious; but just because Bats is so serious, doesn’t mean the rest of us are. GCI takes more pages out of the book of Team Fortress 2 than it does out of any of the dark and broody Batman source material, and that’s okay. This silly FPS features tonnes of gadgets, a veritable cornucopia of weapons, and five default classes to knock some sense into those deranged clowns. You can also unlock custom classes which allow you to dole out your own specialized brand of justice or chaos, depending on which side of the 6-vs-6 action you are on.

Guns are more affordable than fists?
Like I said before, GCI reminds me a lot of Team Fortress 2, with both its comedic tone and creative weaponry. The weapons seem to be the same no matter which side you are playing on, but where the teams and classes differ is in appearance. There are five classes to choose from, each with their own unique play style and look. You can play as the muscular Striker who typically packs an assault rifle and shotgun, or go for the heavy hitting Defender who glides as softly as a cloud on his makeshift batwings (and carries a big rocket launcher… you know, for luck). These two classes are where I spent most of my play time. However, if the mood should strike you, you could also try out the Medic, Sniper, and Scout classes. There are also several gadgets which you will find in each class’s loadout. You can zip around with the Grappling Hook, glide on up drafts with the Glider Rig or jump for joy with the Spring Shoes. These gadgets do a good job of allowing players to access some of the higher points on each map while also allowing for a decent amount of variety depending on your loadout. At this point you’re probably calling shenanigans and arrogantly pointing out the fact that while the gadgets are neat, Batman would never use a gun. Well, GCI explains away that argument right off the bat. You see, Batman is rich and can afford to walk the righteous path of zero bullet justice. Since our ragtag group of not-quite-heroes or villains don’t have the monetary resources to buy all those fancy non-lethal toys that Batman holds so dear, they’ve opted for the more common and traditional method of using bullets and explosives to keep Gotham safe—or to burn it to the ground, whichever you prefer.

Since GCI is a relatively unique multiplayer experience, it’s nice to see that the game types are just as unique as the game itself. In addition to the solo challenge mode there are three game types to choose from. There’s your classic Team Deathmatch, but that’s pretty much it in the traditional sense. The other two game types are “Fumigation” and “Psych Warfare”. Both are variations on traditional FPS game types like capture the flag or control points, but do an excellent job of incorporating Monolith’s warped interpretation of the Batman license and the game’s “not so serious” design. In Fumigation, once the points are capped, a deadly laughing gas will be released upon the opposing team and Gotham’s unknowing population. In Psych Warfare you’re not capturing flags—you’re capturing a battery to power your team’s demoralizing speaker system. It’s refreshing to see that Monolith didn’t just go for the traditional stuff, and instead tried to put a spin on the game types that FPS veterans have been playing for years. It is much appreciated.

Good but not Groundbreaking

The game looks decent enough for a budget FPS, but there’s hardly anything groundbreaking here in the visual department. The game controls relatively well, but using some of the various gadgets effectively will take some practice. One of the biggest problems I have with GCI is the matchmaking. As of this writing the PS3 and PC versions of the game do not allow a player searching for a game to join one already in progress. This makes for longer than average wait times while the game searches for a join-able match. I also found myself in some very unbalanced matches. For example, I was level 10 and I’d be playing against level 50s. It’s not terrible but could use some tweaking. That said, an upcoming patch should address many of those issues as well as adding some extra content in the form of a new map, weapons and costumes.

Speaking of which—oops, I forgot to mention costumes. In GCI you can outfit your character with all sorts of makeshift bat paraphernalia like cardboard cowls, ridiculous t-shirts, and much more. You can spend actual money to get some of these options but, if you’re willing to put in the time, you can earn “Costume Coins” by playing matches and then, in turn, use those to buy some of those fine cosmetic pieces.

Gotham City Impostors is a unique shooter experience at a relatively affordable price. The game sells for $14.99 CAD on PS3 and PC, but the Xbox version will set you back 1200 MS Points. 1200 points works out to about $15.00 in USD but works out to an unfair $19.20 for Canadian customers. It’s a bit of a slap in the face to Canadians, if you ask me. Overall, Monolith has succeeded in creating a compelling multiplayer FPS experience that almost anyone can afford. That said, there’s still a bit of work to be done. The game needs a balance pass; for instance I found the shotguns to be way more effective than they should be at a distance. The matchmaking also needs some work; too often I found myself on a team of two facing down a full team of six or vice versa. This can be a frustrating experience for either side. Those problems aside, GCI is a fun experience that is worth the price.

Gotham City Impostors is a unique shooter experience at a relatively affordable price. The game sells for $14.99 CAD on PS3 and PC, but the Xbox version will set you back 1200 MS Points.
REVIEW SCORE
7
File Under: Action, Adventure, Batman, Comics, fighting game, Microsoft, Xbox