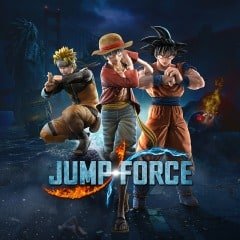 When Bandai Namco first announced Jump Force during last year’s Microsoft E3 press conference, I was skeptical to say the least. Though I’m a huge fan of most Shonen Jump series, I was never quite able to forget the sour taste left by the last major crossover title of the same nature, J-Stars Victory VS+. Still, I cautiously followed Jump Force during the course of its development, hoping that developer Spike Chunsoft would learn from their previous mistakes and deliver on what should be an epic title in the realm of anime-based fighters. Although my prayers certainly went unheard, Jump Force does crawl up a notch above its predecessor, however small that notch may be.

Jump Force is a 3-on-3 tag team fighting game, featuring a little over fourty characters spanning across sixteen of Shonen Jump’s most prolific manga series. The premise of Jump Force sees the real-world colliding with the different universes found in Shonen Jump. This results in abnormalities such as a ruined Statue of Liberty found on Planet Namek or a destroyed New York Times Square. Though the premise is unique and makes for some great looking battle arenas, this is basically the extent of how the idea is utilized. Characters rarely, if ever, comment on their surroundings and there’s almost no reaction from the “real world” to any of these insanely powerful characters suddenly appearing.

The plot of Jump Force revolves around a war between the Venoms, an army of mind-controlled villains and the Jump Force, a collection of heroes from the various Shonen Jump worlds. After being struck down in an attack led by Frieza, players are revived by the Jump Force with technology that allows them to become powerful enough to join the team and fight against the Venoms. Beyond this introduction, the player’s avatar is almost entirely irrelevant to the overall story. Due to their complete silence, it always feels as though the avatar is being talked at and ordered around, never truly becoming a part of the story, despite the game constantly insisting otherwise.

Since it’s premiere, the visuals of Jump Force have been a topic of debate in terms of quality. Built using Unreal Engine 4, the realistic renditions of characters appear noticeably off. At best, characters like Goku or Vegeta look almost like action figures rather than anime characters. Unlucky characters like Black Beard and Deku however, come off as a terrible mix of ugly and uncanny. This rings even more true when the game is in motion. Character models are so stiff that movement is nearly impossible. In fact, models are so poorly animated that a handful of characters are unable to blink or even move their mouths when speaking voiced lines. This makes nearly every cutscene in Jump Force unbearable to watch, as they all feature a group of characters looking like immovable statues for upwards of five minutes. While I have no issue with Jump Force’s lack of English audio, I do take issue with the game’s English subtitles. At various points, I noticed that the subtitles wouldn’t exactly match with what the characters were saying. An even bigger, and sometime baffling flaw of Jump Force is its long and constant load times. Nearly everything in Jump force leads to a loading screen which can take up to a minute’s worth of load time. Even visiting one of the game’s shops or opening the character customization menu can lead to a lengthy load time, potentially deterring players from even wanting to edit their characters.

For those who are patient enough to sit through the loading screens, Jump Force’s gameplay could be considered a worthwhile reward. To start, players are asked to create a customizable character to navigate through the rest of the game. I was impressed with the character creation system, which allows for a good amount of customization. The greatest problem of the avatar character is their voice options. Although there’s a wide selection of voices available, the limited amount of voiced lines is disappointing. Even during the fight introductions, avatar characters remain completely silent, creating an awkward delay at the beginnings of each fight.

The structure of Jump force is very similar to Dragon Ball’s Xenoverse series. Players take on fights in the form of missions, earning them experience and rewards such as items, clothing or money. Again, similar to the Xenoverse titles, Jump Force also contains a hub world where players select missions and shop. Unlike those games though, Jump Force’s hub world is almost entirely unnecessary and surprisingly empty. Beyond a line or two of dialogue, usually explaining game mechanics, the characters found in the hub world have almost nothing to say and serve no extra prupose. The few needed NPCs for selcecting missions and buying or upgrading skills are copy pasted around the map, making the world’s overly large size even more redundant.

Fighting in Jump Force is Despite being a 3-on-3 fighting game, characters in Jump Force share a single health bar. Players can string together chains of either light or heavy attacks, along with four special techniques which draw from a chargeable gauge. Avatar characters can equip any four special techniques used by nearly any of the game’s playable roster. Parrying and counters are also possible, resulting in flashy teleports which allow for some exciting high-level play. The learning curve of Jump Force is by no means steep, but it can be very satisfying to dodge before dealing your own lengthy combo. Players can also activate awakening forms which grant temporary powers boosts. Some characters even change appearance after triggering this mode, allowing characters to transform into their respective powered up states. Although the shared health bar disincentivized my need to change characters during combat, the high-speed action did create for some very exciting matches.

Jump Force’s single player missions become a tedious but mandatory drag as they’re the only way to earn money or customization features for avatar characters. To make things worse, the game’s use of RNG can be both annoying and at times, unforgiving. There were multiple times where I’d completed a mission only to earn no reward at all, forcing me to redo the process. Thankfully, multiplayer will likely be the feature which keeps players interested in the game. From the get-go, Jump Force’s entire roster is useable in multiplayer so unless you’re determined to use your original character, Jump Force’s single player can be avoided.

I didn’t expect much from Jump Force and yet, I still can’t help but feel disappointed. Its core gameplay makes for an enjoyable time, something I haven’t been able to say for an anime arena fighter in a long time. Failing in nearly every other aspect though, I find it extremely to wade through Jump Force’s aggressive shortcomings, so much so that I almost wish the fighting mechanics were bad so I could ignore this title completely. In a world where titles like Dragon Ball FighterZ exist, its hard to swallow the pill that is Jump Force.

Jump Force fails to hit the mark with a total lack of care in terms of everything outside of its decent fighting mechanics
REVIEW SCORE
5.5
File Under: