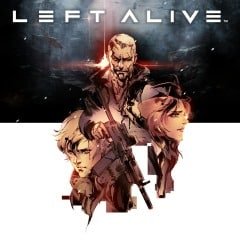 Being a fan of the Front Mission franchise, I took it upon myself to experience Left Alive and see it through to the end knowing full well that I wasn’t going to get much if any, enjoyment out of it. Despite having a great pool of talented developers and artists to draw from, this stealth survival spin-off of Front Mission is being buried by Square Enix as quickly as possible because it recognizes the game as a failure out of the gate. What hurts is that Left Alive could have been something special, but multiple poor design choices and unpolished gameplay create a game that is sadly best left forgotten.

To unravel this mess let’s first begin with the story of Left Alive. Set in the year 2127, the bordering nation of Novo Slava is suddenly invaded by the overwhelming forces of the Garmonia Republic and is now under the threat of genocide. Anyone who could put up a fight has either retreated or been killed in action, the government is all but destroyed, and the bodies of the innocent now litter the streets. This is where players start their journey as the three playable survivors of this dark incident, rookie Wanzer pilot Mikhail, Police Captain Olga, and the framed mercenary Leonid. Each of these characters have their own motivations for staying in the war-torn remnants of Novo Slava, and over the course of the 14 mission campaign, these plot threads will weave together, forcing these unlikely allies to cooperate and uncover the mysteries behind the conflict.

Despite how serious and dark the synopsis of Left Alive’s story is once it gets going it feels more akin to an early 2000’s mech anime, filled with cartoonish villains who enjoy everything about being evil because they get a thrill out of profiting from war or killing people in the heat of combat. What surprised me is that I actually enjoyed this straight to DVD action story because all it did was playoff these old tropes and own it. None of these characters grow or develop in meaningful ways once they’re introduced, but the fun lies in seeing how Left Alive tries to balance a serious story of war and political intrigue with characters that never react to the situation around them with a realistic response.

With the very niche positives out of the way, it’s time to address the gameplay. The core focus in Left Alive is for players to get in the mindset of an underpowered survivor stuck in the middle of a concrete jungle. Instead of diving out into the open streets guns blazing against legions of enemies like a super solider, players need to stick to cover and use the environment and limited resources around them to craft traps and different kinds of throwables to deal with the surrounding threats. While I wouldn’t describe any of the visuals to be impressive in Left Alive, what it manages to get right is the world’s sense of scale and atmosphere where players constantly feel weak from the looming pressure of towering mechs and surrounding soldiers.

However, problems start to rapidly pile up because the devs failed to build a solid foundation of fundamental stealth mechanics and controls that have been implemented by genre-defining titles for years. The biggest issues that immediately come to mind are player control and awareness. When I play Metal Gear Solid or Splinter Cell I feel that my movements are precise, accurate, and fluid, but when I play Left Alive I feel like my character is trying their worst Marcus Fenix impression. Characters move like a brick, animate extremely poorly, don’t snap to cover properly and the camera is pulled in too close for the player to accurately assess their surroundings Throw in some terribly programmed enemy AI and you can never truly make sense of when you’re actually hidden from their gaze or when you’re under threat from being caught. Enemies will just snap their laser pointers onto the player and suddenly it’s time to Gears of War roll out of there until the Alerted status is finished.

Halfway through the 8-10 hour first playthrough of the campaign the core focus on survival will begin to shift and force players into more combat situations, which are a mix of wave style battles and bullet sponge boss fights. The third person shooting mechanics of Left Alive are serviceable at best, but hardly satisfying. Most of it stems from the annoyance that every enemy is heavily armored and takes a magazine’s worth of the limited ammo you’ve managed to scavenge before they drop. It’s also annoying that they can stun your character from using their weapons for a limited time by causing a bleeding effect or shocking them with an electrical drone during the middle of a firefight.

The only time players will ever feel truly powerful in Left Alive is when they jump into the large bipedal mechs known as Wanzers. These walking tanks are the primary reason I fell in love with the Front Mission franchise during the PlayStation 2 era and mecha designer Takayuki Yanase (Gundam 00, and Xenoblade Chronicles X) has definitely brought his A game to the table, no doubt inspired by the aesthetic of Metal Gear while working alongside that franchise’s legendary lead art director, Yoji Shinkawa, over the course of the project.

Gameplay wise Wanzers are a bit clumsy to control because they are intended to feel stiff and bulky, but what really soured this part of the experience for me is the lack of satisfying feedback. There’s no visible battle damage, no fancy effects to sell when you’ve dealt a critical blow, and there’s no satisfying audio when you boost into an enemy Wanzer and crash them into a building. The Wanzer sections sadly just blend into the already milquetoast boots on the ground gameplay when they could have been the star of this mediocre show.

Left Alive is designed to be a game that players will repeatedly playthrough on New Game+ to obtain new endings to flesh out the remaining plot threads of the story and obtain game enhancing perks to make characters feel more powerful during their next playthrough. However, there’s no reason to revisit Left Alive again when there’s nothing truly memorable or worthwhile to experience a second time. In concept, Left Alive could have had the potential to bring about the revival of Front Mission and fill the void left by the absence of Metal Gear at the same time, but none of its elements mesh together to become a cohesive whole. What is released as the final product is a game that lacks a solid foundation to work off of, making every other mechanic and system severely suffer as a result. Farewell, once again Front Mission. I hope we meet again under more pleasant circumstances.

In concept, Left Alive could have had the potential to bring about the revival of Front Mission and fill the void left by the absence of Metal Gear at the same time, but none of its elements click to become a cohesive whole.
REVIEW SCORE
4.5
File Under: