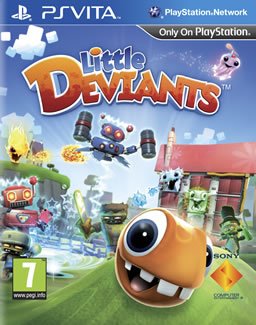 When a videogame company releases new hardware with ambitious features it only makes sense to provide a fun and breezy game that shows off what the system can do. Sometimes this type of game is able to transcend its trappings as a glorified series of tutorials and find acceptance in its own right. Wii Sports, as one example, was the most played game from my late Nintendo’s library. It was a blast with friends, fun enough alone and offered the best exploration and showcase of the (at the time, really impressive) motion controlled system. Wii Sports was better than it needed to be and, because it was of such high quality, it hardly ever left the consoles of many Wii owners.

This isn’t always the case. Sometimes that type of game does not become such a staple and exists as a kind of cruel, launch line-up joke that tricks hapless consumers into wasting money on something that is, essentially, nothing more than a simple tech demo, not really meant to be played, but really, only briefly looked at and dismissed. Little Deviants is, first and foremost, just that — a proof of concept for the Vita’s accelerometer and dual multi-touch screens that doesn’t really ever try to be a proper videogame.

The game’s story, such as it is, revolves around a crew of noxiously cute aliens crash landing on Earth and proceeding to wreak adorable (non-threatening) havoc on the Whomans (blocky humans). For some reason they are also being pursued by murderous robots called Botz and zombies called Dead ‘Uns.

Despite the fairly high quality of animation and visual fidelity enabled by the Vita’s beefy hardware, none of Deviants looks particular good. The cast of alien characters comes off like the result of a five minute brainstorming session that was never refined into something better and the awful names seem like unchanged, design document placeholders. For instance: the orange alien with the googly eyes and hanging, maniac tongue is named Goopher. The green, radioactive alien is named Nucleor! The alien that looks like a shard of ice with a face is, of course, Frostal. And on and on until you’ve met the fiery Pyruss and the Jell-o molded Blobber. This is the kind of creativity developer Bigbig Studios brings to the game.

From the visual design straight on down to the loose, narrative framework it exudes laziness. This is its cardinal sin and the one that keeps it from achieving even the modest goal of functioning as a worthwhile mini-game collection. Everything seems as if it was deemed “good enough” and simply passed on down the line until, now, it is on store shelves and hoping to be purchased for a disgustingly misguided full retail price.

Little Deviants’ misleadingly titled “Story” mode is made up of a collection of short, pick-up-and-play games that bear no ties between one another and provide almost no compelling reason to continue onward. This, again, would be acceptable if these games were actually fun to play, but they aren’t.

For one example, Rolling Pastures, rather than prove the value of the Vita’s rear touchscreen, causes the player to question the choice of the hardware feature at all. In it, players must roll a balled-up Deviant throughout a landscape by causing hills to appear on the map by touching the back of the system. It’s difficult to articulate just how frustrating this mini-game is. The controls are imprecise and getting hit by an enemy once is likely to trap your alien in a spot where it is almost impossible to escape (until sweet, merciful death). This game is repeated, with only a graveyard theme and re-skinned enemies to differentiate it, as Rolling Horror as well and later again as Rolling Shores. Frequent, slightly altered repeats are a content-filling tactic that the already slight game isn’t bashful about using every chance it gets.

Shack Shover (and, later, Chalet Shover and City Shover) are basically just virtualized versions of whack-a-mole. A house with many shuttered windows fills the screen and, when a robot appears, the player must tap either the front or the rear touchscreen to knock it away. Sometimes a human or another Deviant appears. Accidentally tap on too many of them and the game ends.

The two games described above are samplings of the less offensive, purely mediocre experiences on offer here. Others are downright headache inducing. Smashing Tune, for instance, is a particularly horrid little game that sees your Deviant performing as an opera singer while the audience throws debris at the stage. The central mechanic here takes the form of three, vertically spaced lines with power-ups and damaging bottles or glasses travelling across them. The player is meant to sing a high, middle or low pitch into the Vita’s microphone to match a given line, a fun little idea that is completely ruined by the fact that the game has trouble discerning what exactly constitutes a high or low note.

Each of these games is focused on points collection and, depending on how many the player is able to earn, the awarding of either a bronze, silver or gold medal. Bronze medals unlock new games (and, ultimately, new areas and Deviants to play as) while earning a silver provides gallery items — bland concept art. What incentive do gold medals offer? Well, maybe it’s best to just quote the scrolling title screen text: “Win all Golds to be the ultimate Little Deviants™ player.” Working toward this goal seems a bit like aspiring to become the world’s best sock-drawer organizer (only without any of
the practical application).

Aside from trying to reach higher scores players are also encouraged to unlock virtual cats (this is not a joke), dubbed Moggers, designed in the same boxy art style as the human characters. This type of player encouragement — a sloppy checkmark for the design document, really — is endemic to the overall ambitions of the game as whole. Why work hard to flesh out any gameplay concept when presenting the shallowest pretence of it will do? Bigbig Studios would probably have no answer for this sort of question.

Nothing done in Little Deviants is truly original and the lingering impression is that, with a little bit of looking, a more satisfying rendition of every mini-game could probably be found on the iTunes Store at a fraction of the cost. As the publisher of the game, Sony seems woefully misguided in using Deviants as an argument for their expensive new handheld console. It’s hard to feel that this sort of thing warrants a full release when, as a first-party title, it could have made for an okay built-in game (and maybe one that offered extra games and characters as paid DLC) that provided a bit of distraction for new Vita owners. Instead, the sales goal here seems to be tricking new system owners into parting with $30 for what is nothing than a bit of highly repetitive, mindless distraction.

A greedy little exercise in gussying up a tech demo as a full-length game, there is nothing in Little Deviants, short of a future $1 price tag, that warrants any interest.

Little Deviants’ misleadingly titled “Story” mode is made up of a collection of short, pick-up-and-play games that bear no ties between one another and provide almost no compelling reason to continue onward.
REVIEW SCORE
3
File Under: PlayStation