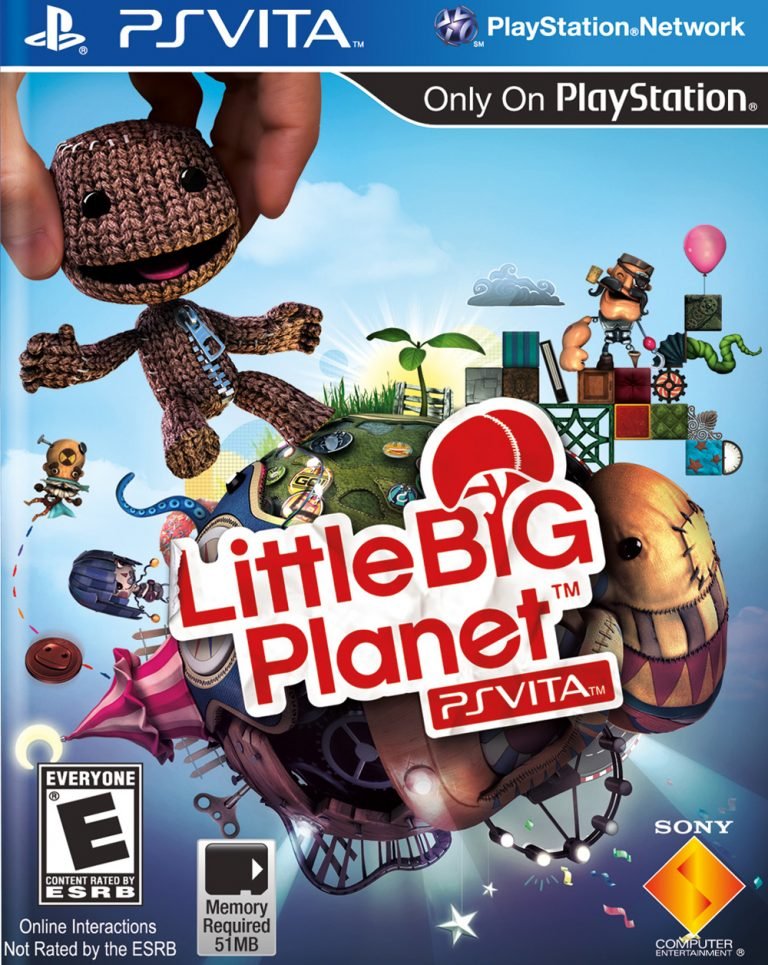 Sackboy has been busy these last few years. First, in 2008, he battled The Collector and saved the residents of Little Big Planet. In 2009 he trotted the globe recruiting curators for a grand carnival. In 2011 Little Big Planet was again threatened, this time by the nefarious Negativitron and with the help of The Alliance, Sackboy was victorious once again. By now you’d figure that everyone’s favorite little sack thing would be ready for some rest and relaxation. I would agree, but that’s just not the case for our hero in LittleBigPlanet for the PlayStation Vita. This time the land of Carnivalia has become a dark and joyless place due to the deranged experiments of a mysterious fellow known only as The Puppeteer. Can Sackboy restore joy and laughter to the realm of Carnivalia? Or will the strange empty minions called the The Hollows doom Carnivalia to an eternity darkness and sorrow. Certainly not, if Sackboy and myself have anything to say about it.

LittleBigPlanet PS Vita is the fourth entry in the main LBP series. When I first got my hands on this title I was worried that after three games LBP and its whimsical puzzle platforming might be getting old. I can assure you that this is not the case. This new PS Vita version features a whole new story that will have you jumping, bouncing, swinging, and grabbing across five different areas of Carnivalia. This is the first time I’ve played a LittleBigPlanet game all the way to the end and I really enjoyed the smooth learning curve. When a new mechanic like grabbing objects or swinging from your grappling hook is introduced, the mechanic is featured prominently in the next few stages which allows you to  get really comfortable with it. As the game progresses and the stages get more challenging, you’ll need those skills just to navigate the intricate levels. While I didn’t find puzzles that really had me scratching my head, it was still satisfying to land those perfect jumps. However, since there wasn’t anything that had me perplexed I did miss those “Eureka!” moments that come from finally solving a puzzle. I found  the game to more about precise and stylish jumping and swinging rather than puzzle solving. Which is fine because the jumping and swinging are as amazingly fun as I’ve come to expect from the Little Big Planet series. The game is also kept fresh by the simple fact that the game is on the Vita, which brings multi-touch controls and the rear touch pad into the equation. The Vita’s accelerometer is also used but I won’t count it as new since the same thing was accomplished by the SIXAXIS controllers on the PlayStation 3.

I really must say that this game is a fantastic showcase for what the Vita can do. It incorporates almost all of the Vita’s features in a restrained and effective manner. At no point did I feel that gameplay elements that took advantage of the Vita’s functionality were gimmicky.  They are used appropriately and effectively. It’s surprising that this game wasn’t released sooner since I found it to be such a great showcase for Sony’s latest hand-held. The bonus for those creators out there is that you now have a new device with new gameplay opportunities to explore. A lot gameplay elements exclusive to the Vita are showcased in the game’s Arcade Mode which becomes fully unlocked upon completion of the game’s story. In Arcade mode you’ll find five mini-games which are great for playing on the go since the levels found within don’t take very long to complete and are very digestible. There’s also lots of side-levels which are found in the five main areas of Carnivalia, and most of them will have you using the Vita in a unique way. For the creators out there, the series signature level creator is back with a few new tricks up its sleeves. The editors interface is based around the Vita’s touch screen functionality which makes  placing and scaling objects intuitive and easy. Also the Vita’s camera allow you to snap photos and turn them into stickers which can be used to decorate your creations. If you’re more of a consumer rather than a creator you can download new levels while connected to Wi-Fi and then play them offline while you’re on the go. However, there are some limitations. It’s a shame, but understandable that levels from Little Big Planet 1, 2, and PSP aren’t compatible with this version. One should also note that access to the online features does require the activation of an online pass. It’s a measure I am not personally a fan of, but can’t really hold against the game.

Although I was skeptical when I first started playing, having completed Little Big Planet PS Vita I can assure you that this is still a quality series that feels right at home on the Vita. The story is whimsical, full of fun colourful characters and has a climax that will make you feel all warm and fuzzy inside. The gameplay is fun and intuitive and features the excellent platforming I’ve come to expect from the series. This game is a must own for anyone with a Vita.

LittleBigPlanet PS Vita is the fourth entry in the main LBP series. When I first got my hands on this title I was worried that after three games LBP and its whimsical puzzle platforming might be getting old.
REVIEW SCORE
9
File Under: Little Big Planet, PlayStation