Another console generation, another return of one of the great console heroes, Snake. More specifically Naked Snake/Big Boss, the hero of Metal Gear Solid III: Snake Eater and the Peacewalker game on the PSP. Snake, his creator, Hideo Kojima and the entire MGS franchise are one of the larger properties in gaming, ranking right up there with Mario and Sonic in terms of fan base and recognisability. Now we have a new game in the series, only it’s not quite a “game.” Some, diplomatically, will call it “prologue,” while others, less diplomatically, will call it a “glorified demo that Konami is charging money for.” So Metal Gear Solid V: Ground Zeroes brings with it not the standard fanfare of a new instalment in a fan-favourite franchise, but many questions about just how much MGS is enough to pay for. The answer to that depends on how much of a fan you are.

The Infinite Melancholy Of Big Boss

Big Boss has never had a particularly happy life and in Metal Gear Solid V: Ground Zeroes, that unlucky streak continues. Set in 1975, MGS5:GZ chronicles the brief adventure of Big Boss as he infiltrates an American POW camp in Cuba to rescue two teen charges. One is the child of revolutionaries while the other is a recently uncovered double agent that was in process of betraying him. All of this is complicated and elaborate, and while the game does a decent job of providing some text to bring the uninitiated up to speed, the fans that will get the most mileage are those faithful to follow the story even over to its PlayStation Portable incarnation, Metal Gear Solid: Peacewalker, or have at least played it on the MGS HD collection. Kojima tends to service his fans, and that continues here in Ground Zeroes with a lot of references and an almost intimidating amount of depth for those familiar with the series. That’s not to say the success of this game relies entirely on fan knowledge. Enough occurs over the course of the story that even the neophyte will probably want to know what happens next, but for the fans, some of this stuff fills out a few blank spaces in the canon. It’s not the most amazingly written story by the rising standards of contemporary games, but Kojima manages to provide the unique plotting and worldview, which made him one of gaming’s earliest auteurs. For older gamers, there’s enough of a story-tease here to make people gnash teeth and await the full release of Metal Gear Solid V: The Phantom Pain whenever it finally ships.

On the technical side of things, this is a cross-generational game, and it shows. The PS4 is the version to own, with the crispest textures and best frame rate, but it’s still not quite the graphical wonder of something like Killzone: Shadowfall or InFamous: Second Son, and that’s because these assets had to be able to run reasonably on last generation machines as well. So while it’s still quite slick and impressive to look at, there isn’t quite the same “Wow” factor as the ridiculously detailed rain-slicked streets of Seattle from InFamous. It’s also a bit surprising to see there’s some delay in calling up the menu, a technical gaffe Konami is usually better at avoiding.

Then there’s the sound, and while almost no one will complain about the authenticity of the gunfire, or the orchestral score that booms through the subwoofer, there’s one big elephant in the room that needs to be addressed; Kiefer Sutherland as Snake/Big Boss. For long-time fans, David Hayter was, is and always will be Snake. In the same way that an entire generation can’t accept anyone but Kevin Conroy as the voice of Batman, for fans of MGS, David Hayter is the same. He’s not here, and the short duration of the game doesn’t really give players enough time to adjust to Sutherland. Objectively he’s a better choice since he’s a professional actor, whereas Hayter is known primarily as the screenwriter who gave us the first two X-Men movies. It’s a bit of cognitive dissonance at first as the game begins with the standard voice over briefing for Snake, and Kojima’s usual dialog pattern emerges, but then fan reflexes go awry as the gravelly Hayter delivery is replaced by a more restrained Sutherland performance. It’s simply going to take more time for fans to adjust to Sutherland’s new Snake voice, but for some, it’s a change they will simply never accept.

Big Boss has obviously been learning some tricks from Sam Fisher because there’s an element of that other big stealth series, Splinter Cell that Kojima has spliced with the signature DNA of his Metal Gear series. In essence, it still plays and feels like Metal Gear, just not as much as past games. The camera is still planted firmly behind Big Boss, a carryover from MGS4, but the iconic item and weapon menus called up by holding the L2/R2 triggers is gone. The reason for this is a serious overhaul to more traditional Japanese aspects of the mechanics. Pausing, for example, doesn’t occur in the game. Looking at maps, communicating with handlers, even selecting weapons and items all occur in real time, with enemy soldiers still patrolling. This has resulted in Kojima eschewing an endless pile of pills, cigarettes, cans of food, and painfully recreated period military weapons that are called up, considered and used. Instead, the D-pad selects from a few weapons and items, while the modern convention of regenerating health has replaced eating food or using med-kits to heal. To hardcore purists, this is some serious sacrilege right here; enough, perhaps, to walk away in anger. There are other new additions as well, like “Reflex” which is a slow motion mode that kicks in whenever Big Boss is discovered, giving him a few moments to line up a head shot and kill the enemy before he can radio for help.

It’s easy to see why Kojima made this decision. For better or for worse, it makes the game feel a little more “Western,” more familiar to that audience, and keeps the pace of the game in constant motion. It gives those less skilled (or less fanatically attached to the MGS systems) a fighting chance to recover from what would normally be catastrophic errors that would be hard to recover from. This is a more forgiving MGS, which some would say is not MGS at all. Then there’s the matter of mechanics normally associated with Ubisoft’s Splinter Cell series popping up in Ground Zeroes. Big Boss gets night vision goggles, just like Sam Fisher, has the option to shoot out lights to make moving undetected easier, just like Sam Fisher, and even enemies react to brief glimpses of Big Boss by investigating his last known location, just as they did in Splinter Cell: Blacklist.

But beyond these changes, that essential MGS feel IS still there. Big Boss crawls through bushes, holds up guards at gunpoint, avoids patrol routes and find alternatives entry points in the sprawling Cuban POW camp. Kaz Miller is the CODEC handler that frequently interjects with information, and there’s a plethora of recordings with that signature Kojima feel to the dialog and writing. This is just a streamlined version of what fans have encountered in the past, and it’s hard to say whether these features will continue as-is in the upcoming Phantom Pain, or whether something even more elaborate is planned for the full game.

And it’s at this point that we come to central dilemma of Ground Zeroes. This is a fun game to play, and certainly and enjoyable experience that is easy to recommend to both fans and newbies alike. However, the “game” costs $30 for the current gen version and $20 for the last gen version. This becomes much more of an issue when you realize that it’s short; a speed runner can finish this in 10 minutes. The average gamer, ignoring all story content, can probably complete the game in 30+ minutes. I took over two hours, on the first playthrough because of exploration, and story-related activities and there are side-missions that are unlocked after completion that add some extra activities to the game. But it’s still essentially one, large sprawling base plus missions, at $20/$30.

So, should you buy this?

It depends on your predisposition as a gamer. If you’re the sort that plays a game only once, and doesn’t go out of their way to find side/hidden content, then the asking price is probably a bit much for a 45 minute (on average) experience. If you’re the sort that got angry with Sony and the Gran Turismo Prologue debacle, this will also make you angry and you should steer clear. If you’re a big MGS fan that cannot wait until the next full game comes out, you should buy this. If you’re the sort that likes to reattempt levels repeatedly for better times, new routes, new technique and strategies, then the flexibility of Ground Zeroes will keep you playing happily for quite some time. Like the introductory Tanker level in MGS2, Ground Zeroes is a large playground that invites repeat visits and experimentation. It is a fun romp, but it is a short expensive one. If dollar/time/entertainment values are important to you, doubtless Ground Zeroes will (probably in a year or two) be bundled with collector’s edition of The Phantom Pain, or perhaps will be a “free” offering on PlayStation+. People with patience can afford to wait on this; alternatives to a full price purchase will likely arise given enough time. But MGS fans that can embrace the changes to voice and game design will find an intriguing taste of the future that plays well, plays fast, but still has that magic  Kojima touch.

This is just a streamlined version of what fans have encountered in the past, and it’s hard to say whether these features will continue in the upcoming Phantom Pain or not.

File Under: Kojima, Konami, Metal Gear Solid, PlayStation
A retail version of the game reviewed was provided by the publisher. You can read more about CGMagazine reivew policies here. 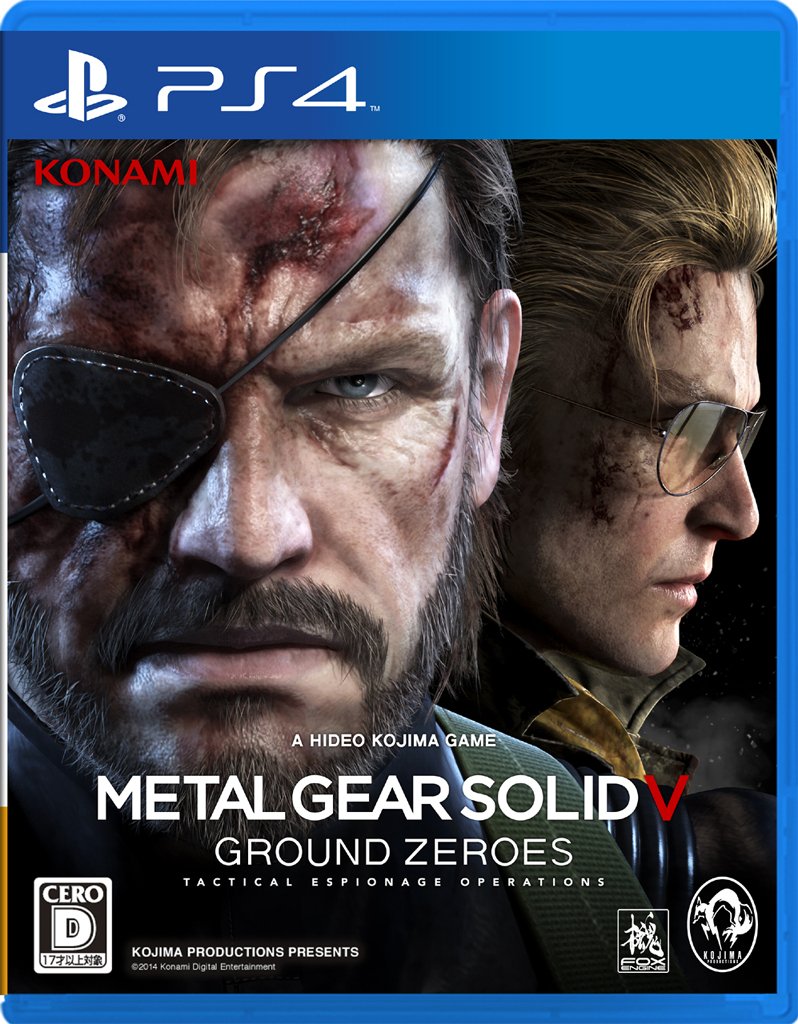