Remember Neo Geo Pocket, Bart? It's back, in Switch form 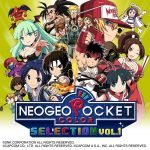 The Switch’s surprising bounty of arcade ports features many from the Neo Geo, SNK’s revolutionary arcade platform. Recently, SNK has been porting the library of its ill-fated Neo Geo Pocket Color, a 16-bit handheld that launched in 1999 against the growing Pokémon juggernaut. Though it could not gain a foothold against the entrenched forces of the Game Boy line, it did receive a smattering of interesting titles and arcade ports—which can now be experienced with Neo Geo Pocket Color Collection Vol. 1.

Metal Slug is the most recognizable of the new titles. If you’re familiar with the franchise, you know what to expect: cartoonish military run-and-gun action that pits you against enemy infantry and artillery with an assortment of weapon powerups, rescuing prisoners-of-war along the way.

Both titles offer more stages than their arcade brethren, in smaller servings, and involve more exploration than previous games. Metal Slug 1st Mission has seventeen stages and an unlockable second character, while 2nd Mission offers thirty-four stages, two default characters with different weapons and routes, and a third secret character. Some slowdown issues are present in each, relics from the original versions where the presentation pushed the little system to its limit.

While both may be appealing to action fans, the sequel stood out as a better experience. Most of the gameplay experience translated well to the handheld mode, though some of the series’ unique visual charm was lost. All told, these two titles offer a surprisingly substantial amount of content for completionists.

The collection’s black sheep is Dark Arms: Beast Buster 1999, a handheld action RPG spinoff to an arcade rail shooter that was ten years old at the time. Think Zelda with guns and unusual anime weaponry, in a horror setting that tries to make Castlevania blush. There’s a paltry narrative here, but at its heart, Dark Arms has a simple gameplay hook: kill monsters, upgrade weapons, unlock the next area.

At the start, the player is given a measly pea-shooter called the Catcher, which absorbs the souls of slain enemies to use as “food” for your weapons. Through the early stages, three more weapons can be created, equipped, and evolved to offer more variety and firepower. The Handgun ultimately evolves into a Shotgun, for example, while the tentacle-like weapon eventually unlocks a 360-attack.

Most of the weapons are somewhat undecipherable by their basic names, so there is some guesswork to be done—even the in-game manual doesn’t elaborate. This is emblematic of a larger problem with the game. The story is told through tiny textboxes with a ridiculous, oversized font and spotty translation. NPCs make just enough sense to point you in the right direction.

Dark Arms is a pretty fun experience despite its flaws. It’s somewhat unforgiving, compelling you to upgrade your weapons and meet the challenge. You’ll need to traverse the handful of areas in both day and night modes to truly unlock everything, and a mountain of different foes will challenge you along the way to a final dungeon gauntlet.

In a way, it seems too ambitious for the platform. If Dark Arms had been released a couple of years later on the Game Boy Advance, it might have been more memorable.

Last of the new additions is my surprise favourite, Big Tournament Golf. I rarely dabble in sports games, but SNK’s simple little sim reminds me of the simple charms of the Hot Shots Golf or Mario Golf franchises. Its cartoonish style is more visually appealing now than the arcade version that inspired it. There are three 18-hole courses and three modes—Stroke Play, Match Play, and a Triple Crown tournament—along with six different player archetypes to choose from.

Each shot begins with an overhead view, where you can change your aim, then drops to player level, where you can change your club or adjust the curve of your shot. The rest is standard golf game gauges: stop the power and accuracy gauges where you wish, and watch your shot play out. Standard measurements are present as well, like wind, distance, elevation, et cetera. Repeat three to five times per hole, hopefully, and again for another seventeen holes.

It’s a basic sim, but I found it strangely addictive—prompting at least one “are you okay” look from my wife as she passed by.  It may lack the realism of a PGA sim or the hijinx of Mario Golf, but it’s a capable simulation that works well on the Switch’s hybrid hardware. It even inspired me to dust off Hot Shots Golf 2, another 1999 release, whose inputs I found were infuriatingly inaccurate by comparison.

The six previously-released games are all fighters, miniaturized renditions of SNK’s legendary franchises like King Of Fighters and its stellar crossover SNK Vs. Capcom (for more on this game, check our full review here). They work as representations of the larger originals, and dedicated fans will find a good chunk of content to digest in each, but overall aren’t the best introduction for newcomers.

The engine powering the whole package is interesting. By default the display features a physical Neo Geo Pocket Color on-screen, as a frame that disguises the aspect ratio. There are several different skins and some screen filters for authenticity, or you can remove them altogether and enlarge the action—which I recommend. You can also view scans of the manual directly from the pause menu, and even 3D models of the case and cartridge, or change languages. SNK took care to flesh out these releases, and the collection stands as a piece of gaming history, preserving an easily-overlooked handheld.

So is it worthwhile? For SNK fans, yes, especially if you missed the Pocket Color like everyone else. Despite the Compilation’s game-to-dollar value, though, this is still a collection of twenty-year-old handheld games. If you miss the Game Boy days and want something new to play, you may find something worthwhile here.