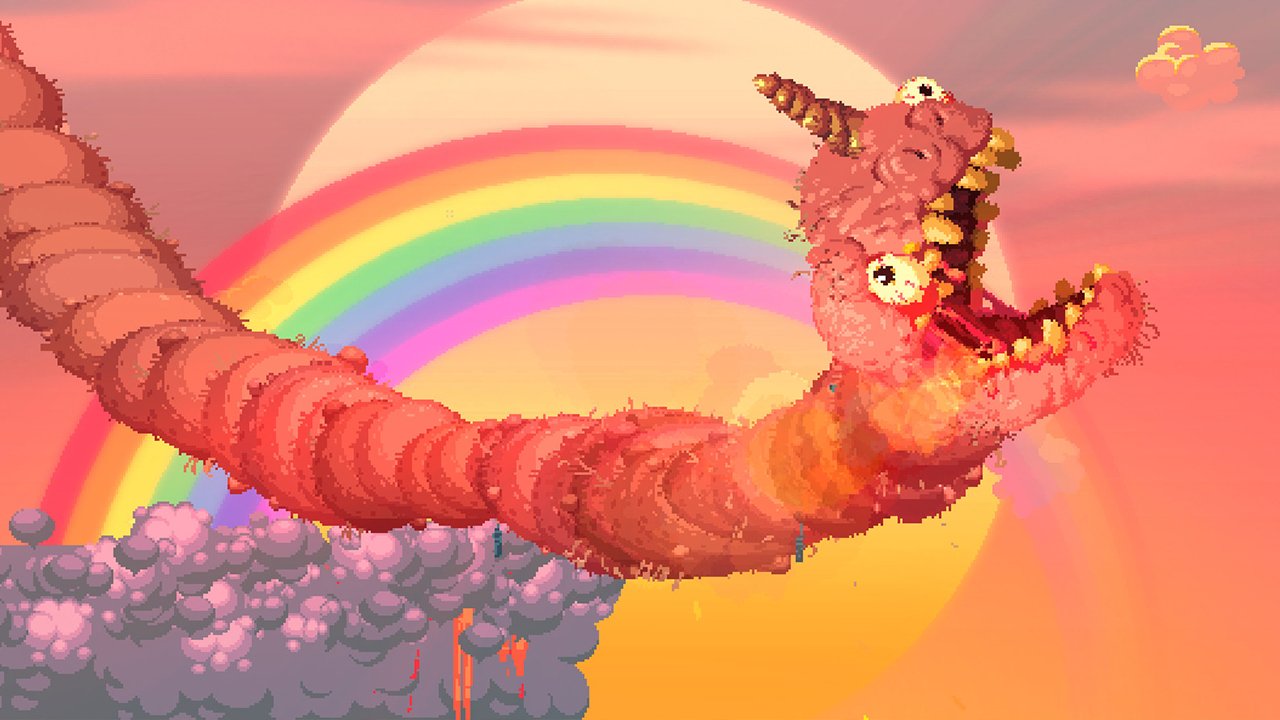 It has been three years since the original Nidhogg released to some fanfare, and now its sequel, Nidhogg 2, is finally here—but what exactly is different?

Nidhogg 2 is nearly identical in its combat and format: two players battle it out via fencing with swords in an attempt to get past each other and reach the end of the stage where they sacrifice themselves to a giant flying worm. There are some new weapons introduced including short daggers, heavy swords that can knock the original thin swords out of players hands, and a bow and arrow. Aside from that, there’s a new not-so-memorable soundtrack featuring artists such as Doseone and Daedelus, an online matchmaking mode (which I haven’t been able to test), new stages, a new graphical style, and the ability to create custom characters.

As I’ve said, the combat is largely unchanged. You can still jump kick, throw your weapon, change your stance from high to low, do slides, somersaults, and pick up dropped weapons. The biggest change here is the variety of weapons, though they don’t make a huge difference, apart from the bow and arrow as it forces players to jump or deflect shots far more than a single sword being thrown. One issue I had with the weapon variety is that in the arcade mode you’re eventually spawning with random weapons and they don’t seem evenly matched, as the dagger is too short to be useful against the heavier long sword or bow and arrow and so forth. That said, games in the fighting genre rarely shake up their core combat much between entries, but even so, I couldn’t help but feel I wanted something more here.

The graphical style of the original Nidhogg looked heavily inspired by the bland yet memorable aesthetic of classic Atari games, where Nidhogg 2 is reminiscent of PlayStation 1 era 2D platformers like Rayman. Whether or not you like the graphics comes down to personal preference. I don’t mind them, though the animations aren’t my favourite as they have that thing going on you’d see in some early flash animations where it seems like the animator simply moved the joints instead of going frame-by-frame.

While I much preferred the smoother animation of the first game, I love the stage art in Nidhogg 2. Stages seem to reference a lot of classic games, such as a living forest with faces on the trees (Mortal Kombat 2), a nightclub stage (like every beat ‘em up ever), and some of the more original stages which are just downright grotesque in the best way—like an airship with a worm meat factory or the insides of giant worms.

If only the stage designs were nearly as enjoyable. Many of the stages have holes or gaps that players can fall through, and because every time you die you’ll respawn from your side of the screen moments later, it sometimes leads to spawning essentially on top of the holes. I don’t think I ever spawned on top of a hole, but many times I’d spawn and immediately fall upon moving—which can be comical during a “for fun” scenario but will surely frustrate more competitive players. There is always the potential that forcing your opponents to spawn in specific places becomes a part of the meta, but it isn’t something I enjoyed.

While I appreciate any game that gives me the ability to customize characters, Nidhogg 2 is just too basic to be good in this department. You can only change the hair, clothes, and skin colour of basically identical brightly coloured muppet-like characters. There are far too few options for it to be deep or memorable in the way that most games offer character creation.

If you liked Nidhogg, Nidhogg 2 is more of the same—which is probably enough for most people. A few new weapons, a shallow character creator, cool stage backgrounds and online play are the biggest changes you’re paying for here. I just wish there were more substantial editions aside from those.

Nidhogg is back with muppet-like characters, new weapons, a new coat of paint, and not a lot else.