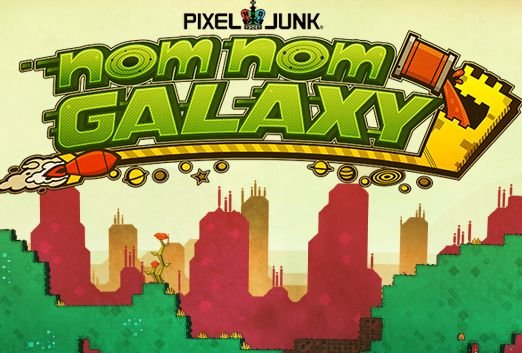 The first thing you’ll probably notice upon starting up Q-Games’ Nom Nom Galaxy is that it boasts a brilliant soundtrack. The menu music is a great downtempo pseudo-trip-hop twist on the whole classic psychedelic rock vibe, and damn is it good to just chill to. Similarly, the in-game music is brooding and experimental, but subtle enough to merely enhance the experience, rather than dictate it. You may think the soundtrack an odd point to lead with, but given how difficult it is to even define a genre for Nom Nom Galaxy, it’s as good an opener as any.

See, NNG is a survival game. It’s a puzzle game. It’s a game about exploration. It’s about digging and managing resources. It’s also a base-building game. It’s a strategy game, with elements of tower defense, and it even stretches into economic simulator. Let’s call it what it is, then, shall we? Nom Nom Galaxy is a Soup Factory Simulator.

In a dystopian future where soup companies rule the galaxy, you are tasked with terraforming and exploiting planets for the sake of creating new soup recipes in the pursuit of controlling market share. Each planet is like a puzzle unto itself, all featuring their own terrain, resources, and enemies, as well as different levels of challenge posed by the increasingly more difficult AI companies that seek to prevent your market domination. To this end, they will send waves of enemies to assault your factory as you threaten their profits. This means that in addition to managing resources for the sake of building larger and more elaborate factories for the glory of soup production, you must also strategically defend those factories from invading marauders. Sounds like a simple enough premise, no?

In actual fact, it’s hard as sh**; or I’m just bad at it, which is a possibility I’m totally willing to cop to. Whoever added its “casual” tag on steam is a meanie, as NNG is about as relaxing as an afternoon with Papers, Please. It’s also a hell of a lot of fun.

The primitive and obtuse, albeit versatile methods for automation remind me of creating complex mechanisms in Minecraft using clusters of simple Redstone circuits. There’s something I find highly rewarding about that type of problem solving, and NNG presents this in the best way possible; everything is hidden beneath a veneer of simplicity. The automation tools can take some getting used to in the earlier levels (particularly because they’re not entirely intuitive at first), but they do work and it is worth taking the time to learn how.

As you progress across the galaxy, you’ll unlock new upgrades and technologies to aid in your ventures, as well as encounter newer and more challenging enemies—some of which are naturally occurring and must be harvested as ingredients, posing an extra element of challenge. When combined with the burden of juggling multiple resource types, micromanaging the growth and harvesting of ingredients, and defending against attack, all whilst competing against AI companies, things can quickly get out of hand. It’s exactly the kind of experience that is only enhanced by the inclusion of two player split-screen and four player online co-op, as well as the Global Challenges and unrestricted free-build S.O.O.P. modes. The Global Leaderboards should also help to encourage competition among those who look for that sort of thing.

Nom Nom Galaxy is a game that draws inspiration from so many different genres and games, all of which I hold dear. It’s hard to imagine they’d marry as well as they do, but perhaps in that regard, this game about soup is the perfect allegory for itself; and it’s all wrapped up in that derpy-cute PixelJunk art style. As a Soup Factory Simulator, then, it’s quite literally in a league of its own; that makes it a pretty special little game.

Nom Nom Galaxy is a game that draws inspiration from so many different genres and games, all of which I hold dear.
REVIEW SCORE
7
File Under: Tower Defense